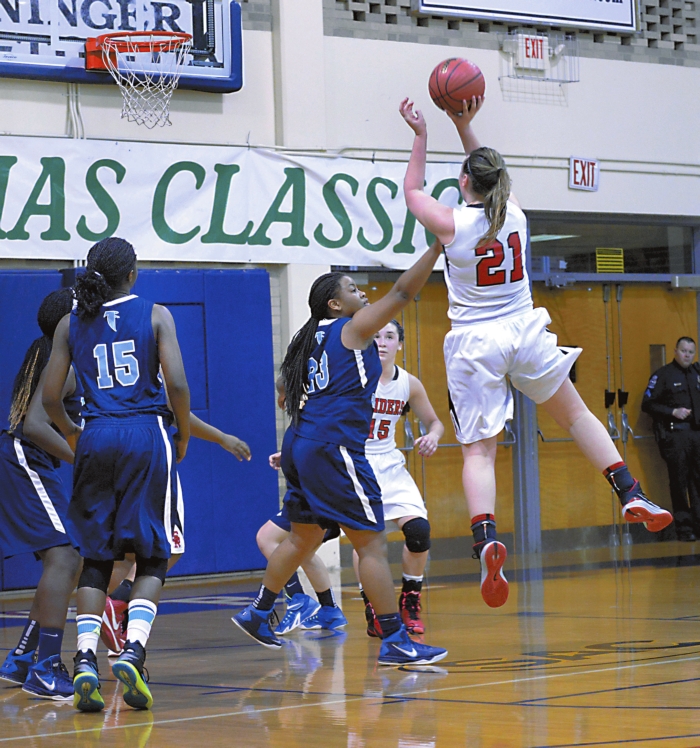 SALISBURY – Given that it was a 9 a.m. consolation game Monday morning in the Sam Moir Christmas Classic, South Rowan and West Rowan certainly did not put on a shooting clinic.

But the Raider girls were finally able to put away West Rowan for good thanks to a clutch 3-point play by Malaysia Williams in a 52-44 Raiders win. Every time South Rowan threatened to break it open, West Rowan managed a response until just under two minutes remained.

South Rowan (7-4) led by 11 on Avery Locklear’s jumper with 2:05 remaining when the Falcons (4-8) scored two quick baskets to cut it to 46-39 and seize a shred of momentum. But Williams, a key inside reserve, scored on an inbound pass under the South Rowan basket and drew the foul. She completed the and-one at :59 seconds to make the score 49-39 and settle the outcome.

“I didn’t really know how much time was left to be honest” Williams said, ” I was just trying to screen at the top and rotate down to try and score.”

The win ended an 0-7 skid in the tournament for South Rowan, including its opening loss to North Rowan Saturday. The Raiders led the game for all but one possession despite shooting just 34 percent. One key reason was the 22 turnovers they forced on West Rowan and converted into 19 points.

“We had a lot of people step up today and do what they were supposed to do,” South Rowan coach Jarrod Smith said. “We wanted to come together and play as a team and we did that when it counted.”

The Raiders were led by their senior guard Locklear who had 21 on 10-of-17 shooting. She is now just 21 points away from becoming South Rowan’s all-time leading scorer. Point guard Sylvetta Bost added 12 while Cassidy Chipman played strong inside with six points and 13 rebounds.

South Rowan now plays for fifth place in the Moir at noon Tuesday against Carson. West Rowan goes for seventh place at 9 a.m. against Salisbury.