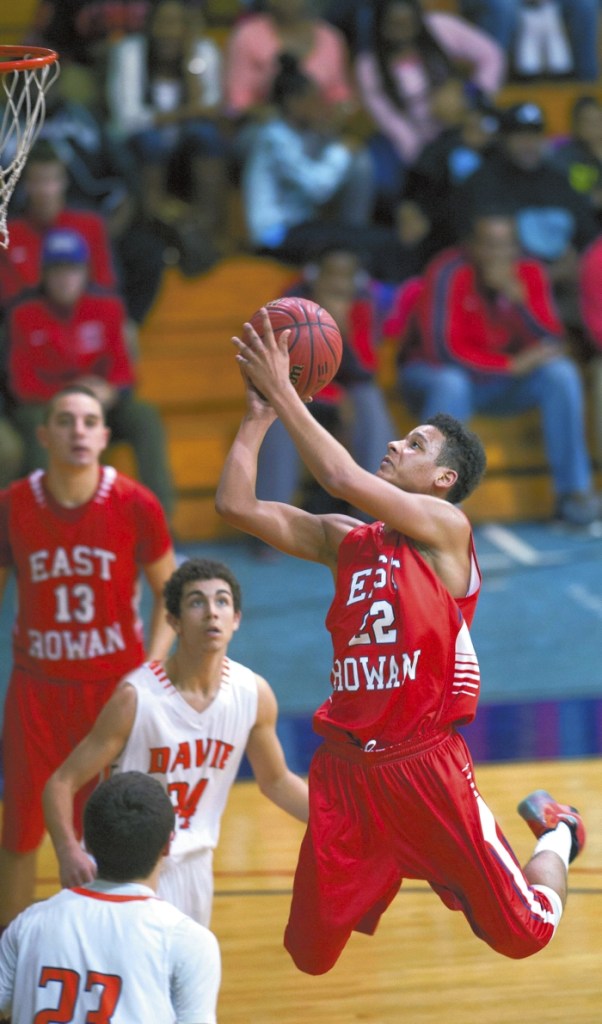 SALISBURY — East Rowan has a chance to do something it hasn’t done since 2006. The seventh-seeded Mustangs on Monday easily defeated the sixth-seeded Davie County War Eagles 67-55 to advance to Tuesday’s championship game of the Sam Moir Christmas Classic. The Mustangs last won the annual tournament eight years ago.

“Just getting to the finals regardless of seed is just an accomplishment in itself,” East Rowan head coach Trey Ledbetter said. “We’ve been waiting and waiting and waiting to gel, and I think we’re finally starting to come together after football and injuries and everything.”

East Rowan plays No. 5 West Rowan at 8 p.m. in the championship game.

The Mustangs never trailed throughout Monday’s contest. The teams, however, kept it close in the first half. Tay Davis’ coast-to-coast layup late in the second quarter gave the Mustangs a 35-29 lead at halftime.

A backdoor layup by Davie County’s Jordan McDaniel cut the War Eagles’ deficit to 42-39  with 2 minutes, 23 seconds left in the third quarter.

That’s when East Rowan turned it on. Austin Love swished a wide-open 3-pointer from the right wing for a 47-41 lead.

Davis made a pair of free throws in the middle of the fourth quarter for a 58-42 lead, East Rowan’s largest of the game. It was the end of the Mustangs’ 16-3 run.

“We’re good when we’re ahead,” Ledbetter said. “Defensively, we did buckle down there for about 3-1/2 minutes and we got some stops and we separated ourselves a little bit. They can flat stroke it, and for a little bit I didn’t know if we were ever going to pull away. But kudos to our guys for stepping up.”

Bravon Goodlett was 2-for-2 from behind the arc and 5-of-7 on free throws for a team-high 13 points. Davis and Love both had 11 points.

Davie County’s Nic Starnes and Jordan McDaniel both had a game-high 17 points.