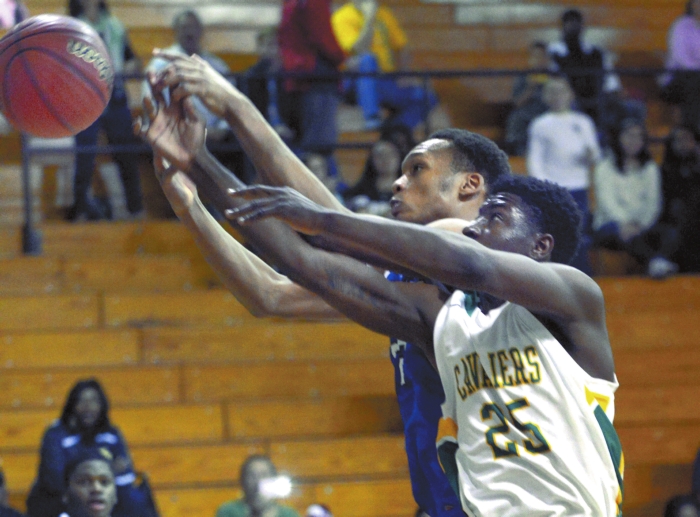 Mooresville's Jay Davis #32 and North's Alonzo Sirleaf #25 reach for a rebound. photo by Wayne Hinshaw, for the Salisbury Post

SALISBURY – The last place the North Rowan boys expected to be in the annual Moir Classic basketball tournament was playing in the seventh-place game.

But that is where the Cavaliers find themselves at 10:30 a.m. Tuesday after a frustrating 55-43 loss to Mooresville on Monday in a consolation game. The second-seeded Cavs (6-4) were victimized by their own poor shooting, a major disparity in fouls plus an air tight 2-3 zone defense by the third-seeded Blue Devils (6-4).

“We shot way too many 3s,”said North Rowan assistant coach Bill Kesler, who was acting as head coach in place of suspended Andrew Mitchell. “But when we drive the lane and get nothing out of it, we may as well shoot the threes.”

Mitchell was ejected from Saturday’s first-round loss to East Rowan. He has to sit out at least two games pending payment of a fine and other administrative action by the state association.

Mooresville looked to be in trouble against North Rowan when a wave of fast breaks put them in a 10-2 hole. But a 3-pointer by Corban Usry gave the Blue Devils a 19-18 lead late in the second quarter, leading to a slim 23-22 halftime margin.

It all fell apart for North Rowan in the third quarter when it was outscored 19-5. The Cavaliers did not score for the first six minutes of the quarter and by then Mooresville owned a 36-24 lead behind Jay Davis and Christian Holbrook. The deficit reached was 44-27 early in the fourth period before Josh Handy led a charge with a pair of long 3-pointers to cut it to 48-40 with 1:46 left.

But a three-point play by Holbrook at 1:10 put Mooresville up 11. The Blue Devils hit 6-of-7 free throws after that to seal it.

“I thought our zone was very effective,” Mooresville coach Michael Micklow said. “We didn’t give them (North) many second-chance points and our guys did a great job on the boards. We are a young team but we played very well together today.”

Holbrook with 12 and T.J. Daniels with 10 topped Mooresville who play in the 1:30 pm fifth place game today against Salisbury. North, which shot just 28% from the field, was led by Handy and point guard Jalen Sanders with 12 each. They face Carson in the seventh place game.