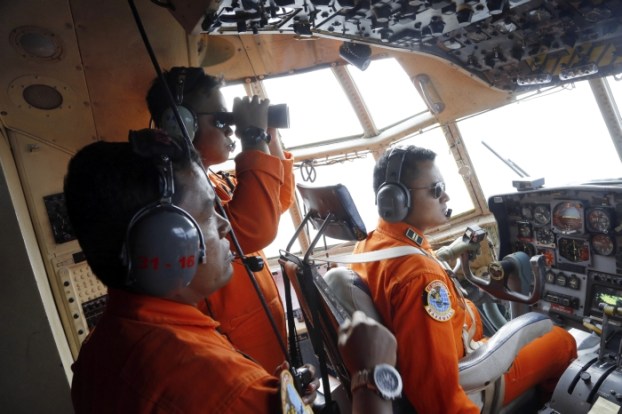 Crew of Indonesian Air Force C-130 airplane of the 31st Air Squadron scan the horizon during a search operation for the missing AirAsia flight 8501 jetliner over the waters of Karimata Strait in Indonesia, Monday, Dec. 29, 2014. Search planes and ships from several countries on Monday were scouring Indonesian waters over which the AirAsia jet disappeared, more than a day into the region's latest aviation mystery. Flight 8501 vanished Sunday in airspace thick with storm clouds on its way from Surabaya, Indonesia, to Singapore. (AP Photo/Dita Alangkara)

Though many have been evacuated, others remain trapped on the smoke-filled vessel that caught fire in the Adriatic Sea.

4. HOW YOUNG AMERICANS FEEL ABOUT VOLUNTEERING

An AP poll finds that those under 30 are more serious about giving back than their parents were.

The man used the leash cord from his surfboard to make a tourniquet for his leg, and got himself to shore.

Insurgents are seizing territory across the country, putting civilians at greater risk as the weather worsens.

7. SONY PLAYSTATION BACK ON LINE

But the company says heavy traffic may cause problems, following three days of disruptions blamed on hackers.

8. WHAT THE RUBLE’S DECLINE USHERS IN

The Russian currency drops 7 percent as the economy shows the first signs of recession.

South Korea’s Transport Ministry says four officials will be punished following an investigation into a former Korean Air Lines executive who forced a flight to return over a bag of the snacks.

Whether Harbaugh, who guided San Francisco to three straight NFC championship games, is resigning or was fired isn’t clear.

Jack Frost certainly left his mark this morning. Starting off at a cold 26 degrees, we should eventually warm up... read more