‘Tomato Drop’ will juice up New Year’s in Woodleaf 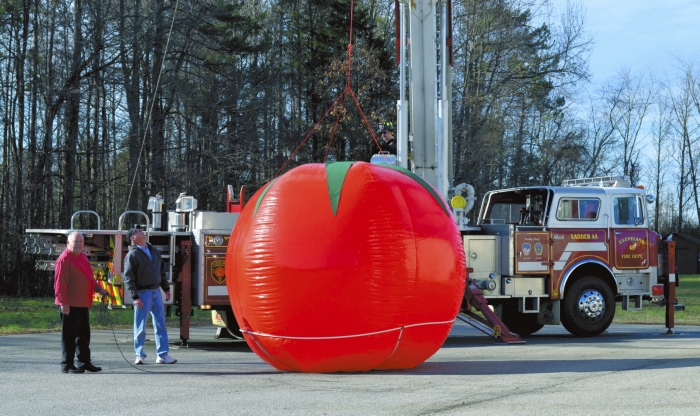 WOODLEAF — After the success of the giant tomato float in Faith’s Fourth of July parade, and the attention it attracted at the Woodleaf Tomato Festival in August, it seemed fitting to ring in 2015 with the town’s famous fruit.

And thus the Woodleaf Tomato Drop was born.

Starting at 9 p.m. on Dec. 31, locals will gather at Unity Presbyterian Church, 885 Woodleaf Barber Road, for live entertainment and refreshments.

As the final seconds of 2014 tick away, volunteers will slowly drop the giant tomato from a pulley atop the boom of Cleveland Fire Dept.’s Ladder 45.

Patti Safrit, member of the Woodleaf Tomato Festival Committee, said the idea is a way of celebrating the town’s farming heritage during a time of year many of those farmers have a little more time to relax.

After the idea of a tomato drop came together, it took quite some time to figure out how it could actually work.

James Moore will have the duty of helping lift the tomato off the ground, then slowly lower it by rope and pulley for the countdown to midnight.

At first, the inflatable tomato would stretch out into an oblong shape when lifted off the ground, said James Moore.

“We wanted a giant tomato, not a giant hot dog!” Moore quipped.

The answer, Moore said, literally came to him in a dream: a cradle made of rope to hold the tomato’s round shape as it’s lifted toward the heavens.

Elvis in the building

Safrit said that Elvis — portrayed by local musician Eddie Wetmore — will be the evening’s master of ceremonies, and will perform as well.

There will also be a karaoke “open mic,” Safrit said, for those who wish to bring their own backing music on CD. Songs must be family-friendly, in keeping with the nature of the event, Safrit said.

Also, following the success of their appearance at the Faith Fourth of July parade, Safrit said the Woodleaf Dancing Tomatoes will be represented on New Year’s Eve.

Bob Turner, of the Woodleaf Tomato Festival committee, said the goal is to give families a place to gather to celebrate the start of 2015.

“That’s what we’re hoping for, a community event that lets people have a good time,” Turner said. “A good, clean atmosphere where families can come and enjoy themselves.”

The Big Tomato in Woodleaf will be hoisted by Cleveland Fire Department’s Ladder 45, a truck that served the Westbury Fire Department in New York and responded on Sept. 11, 2001.

Capt. Ryan Haglan of the Cleveland Fire Department was one of several organizers who said that, in addition to this patriotic fact, it’s nice to think there’s a connection between the Times Square ball drop and Woodleaf’s celebration.

“The ball drop tradition started in New York City,” Haglan said, “and now a fire truck from there is a part of it here.”

“I think it’s great that we’re able to contribute to something that’s bringing the community together,” Haglan said.