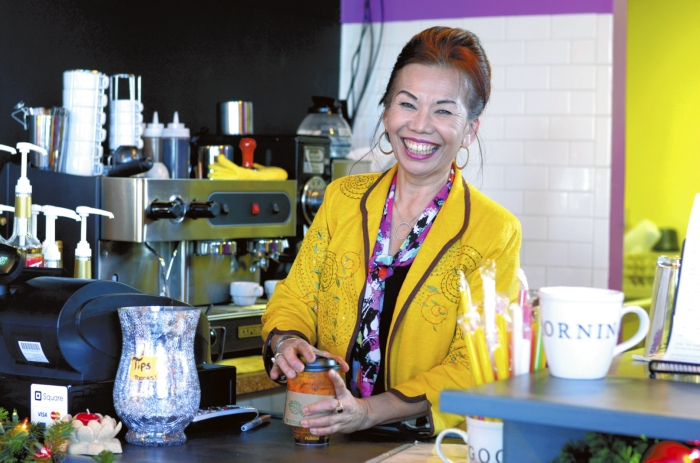 KANNAPOLIS – For many locals, Sunshine’s Asian Cuisine at 215 West A St., is a destination for Thai and Japanese food, sushi and other Asian delicacies.

After several years of success, owners say the time was right to expand their popular eatery, offering more seating, and also to fill a need left vacant in downtown Kannapolis.

The downtown village’s new coffee shop is now open next door at 219 West A St., at the intersection with Oak Avenue.

Sunshine’s Coffee Shop fills the space most recently occupied by the Vino Hops bar, which closed earlier in the year.

Owner Sunshine Siharath said she had wanted to offer more seating space for a long time, and that there were few options for those who want espresso drinks.

For four weeks, Sunshine’s Coffee Shop has been slowly building clientele through word-of-mouth. A formal grand opening is planned after the holidays.

The newly-renovated space maintains the coffee bar and adds draft beer on tap, as well as a wider selection of imported and domestic bottled beers.

With comfortable furniture, a board for checkers or chess, and Asian-themed décor, the new space is meant to be warm and inviting, to give people a place to gather, said Nina Siharath, daughter of the owner.

Pointing out items on the new coffee shop menu, Nina said the goal was to keep items affordable.

“It’s very affordable,” Nina Siharath said, pointing out that a small cappuccino costs only $3, with iced mochas priced at $3.75 and lattes starting at $3 as well.

The most expensive drink on the menu is a real fruit smoothie, which at $4.30 costs less than many drinks at Starbucks and other coffee chains, Nina said.

“We want to keep it affordable for people working in Kannapolis,” Sunshine Siharath said.

The former Vino Hops bar has been removed, and the space converted to table and booth seating for 20 additional patrons.

The original Sunshine’s Asian Cuisine space connects with the coffee shop through the new room, while the original restaurant retains its seating layout.

Still more seats can be added for special events, Siharath said. The new room also features a stage with sound system and lighting.

Siharath said she hopes the expansion will provide another venue downtown for parties, family events and meetings.

Sunshine’s Asian Cuisine has been home to weekly open mic nights, where local musicians, poets and storytellers have performed.

Live painting and mini-concerts have also been held at the restaurant.

Those events will continue in the new space, Siharath said.

Nina Siharath said a new event, Kids Got Talent!, will be held weekly on Thursday nights.

Families are invited to bring their kids to sing, dance or perform at this special family-themed open mic night.

Kannapolis Arts will also be hosting a monthly artists’ expo at Sunshine’s.

Siharath said the expansion will help provide more opportunities for people to enjoy themselves in downtown Kannapolis.