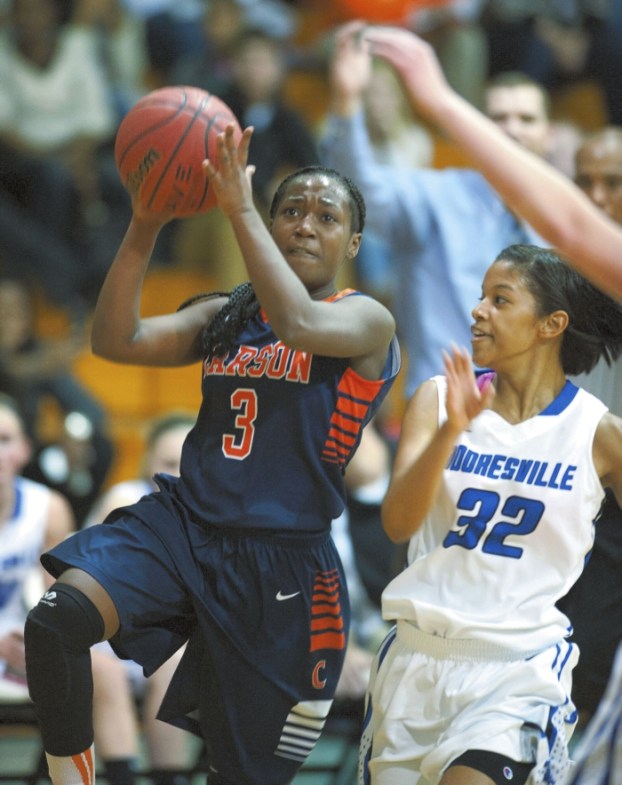 SALISBURY — Even a career-high 25 points by freshman Olivia Gabriel couldn’t push Carson into the semifinals of the Sam Moir Christmas Classic.

Fourth-seeded Mooresville got double-doubles from Ashley Cullen and Taylor Borlase and a whale of a game from point guard Amber Sherrill and held off the Cougars 59-53 in a first-round game on Saturday night.

“Mooresville was solid, very sound, and they’ve got a really good point guard,” Carson coach Brooke Misenheimer said. “They came out playing lights-out from the tip. We made some good runs to catch up, but then we had our lulls. Too many lulls to win.”

Mooresville led 8-0, but Chrishona Roberson got the Cougars going, and it was 8-8. Mooresville sprinted ahead 23-10, but the fifth-seeded Cougars came back again and led late in the first half after Sydney Huffman made a layup created by Gabriel. Sherrill, who had 18 points and six assists, hit a 3-pointer to give the Blue Devils a 29-28 halftime lead.

“They’d shot so well in the first half (6-for-11 on 3s) and we were still only down one,” Misenheimer said. “We felt like we were in pretty good shape, but we just didn’t play a 32-minute game. We did show some growth, but we didn’t play a full game.”

Mooresville  (6-3) played a lot tougher on the glass in the second half. Cullen (18 points, 14 rebounds) and Borlase (13 points, 12 rebounds) kept cleaning the glass on Carson misses. There were a lot of one-and-dones.

“We addressed the rebounding situation at halftime, because there were some times when we stood and watched balls hit the floor in the first half, and I hate that,” Mooresville coach Andy Sparks said. “We also stopped turning the ball over.”

A layup by Huffman early in the fourth quarter pulled the Cougars (5-6) within 39-38, but Borlase answered with four straight points, and Carson never got the lead.

Mooresville led by 12 with under 50 seconds to play, but the Cougars played right to the buzzer as they always do.

Gabriel shot 11-for-15 on free throws and 7-for-13 on field goals, but Carson’s other scorers didn’t have a good shooting night. Alex Allen had 13 points, 12 rebounds and five blocks.

“Our girls (usually Cullen) did a good job defending Allen,” Sparks said. “But Gabriel was hard to stop. It’s pretty hard to defend baseline runners, and she was making them. And according to the stats, she’s a 56-percent free-throw shooter, but it seemed like she made them all tonight.”

Mooresville will play East Rowan in a 6 p.m. semifinal on Monday. Carson plays Salisbury in a consolation game.

SALISBURY – The North Rowan girls added a new weapon to their arsenal Saturday morning and as a result they... read more