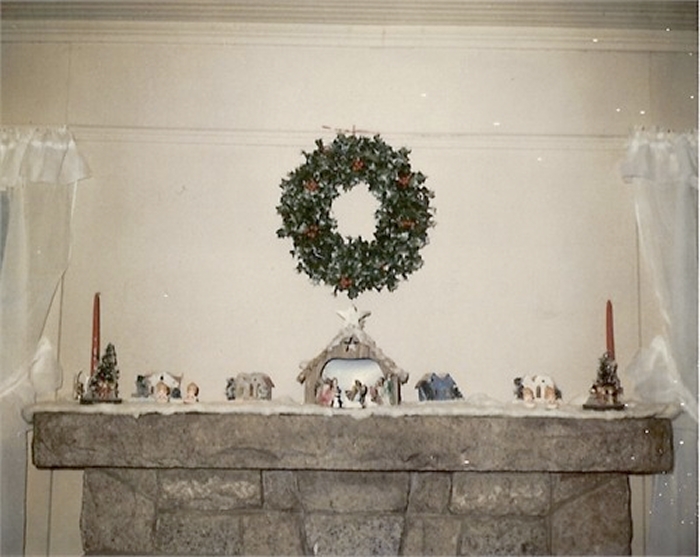 PHOTO COURTESY OF MACK WILLIAMS The granite mantle in the Williams home on Old Concord Road, decorated for Christmas, in the 1960s.

I am, at heart, Lutheran, and we don’t give up Christmas on Dec. 26, so for that reason you see the following, post Christmas:

I was recently looking through some old black-and-white snapshots made at my childhood home on the Old Concord Road. Both my brother Joe and I, and our father before us, loved snapping pictures, and so does my son Jeremy. With Joe and me, it was the negative, and with Jeremy, it’s the memory card.

Among the outside, winter-themed photos were interior, Christmas-themed ones.

In addition to the old cedar Christmas tree scenes (complete with a certain toy-encircled kid), was one of our Christmas-decorated living room mantle.

Many mantles are constructed of wood, overlying putty-sealed brick or stone, but the entirety of our mantle consisted of granite, the upper part being essentially one long slab of it. I have no doubt that the slab and its supporting structure consisted of the locally quarried granite of Rowan County. (And there were a few other pieces in my sand pile.)

Looking at the attached picture, and as you read me stating: “Our mantle was of solid construction,” you might say, “No kidding fella, it’s granite!” (But please don’t say, “Duh, it’s granite,” because “duh” is a corruption of the English language, on a par with grunting.)

In this instance, I mean the same type of sturdy, methodical construction as that seen in a rock wall. I live next to a cemetery rock wall constructed by the old WPA, and the workmanship is of similar quality, although I know my boyhood fireplace-mantle wasn’t WPA-built.

Although the old mantle isn’t arched, I can see what resembles the extra-supportive, centrally placed Roman “keystone.” (My father was born in Keystone, West Virginia.)

As you can see from the photograph, our living room mantle Christmas display consisted of the same sort of things used for such “scenes” both then and now. A blanket of cotton became the blanket of snow. I’m sure those little miniature houses seen in the picture came from my mother’s old workplace, W.T. Grants. “Made in China” is now stamped on that sort of thing (along with most everything else), but “Made in Japan,” or just “Japan” was stamped underneath those little houses.

Those were the late 1950s to early ’60s days when Japan was becoming known for making progress in making better things than simple little stuff like miniature houses for Christmas, such things as binoculars and electronics. (In comedian Alan Sherman’s “Twelve Days of Christmas,” “a partridge in a pear tree” was replaced by “a Japanese transistor radio.”)

Although the stick candles in the picture weren’t affected by the heat from our heater, the little wax candle carolers were. I say so because I have a few of them still in my possession, and their countenance looks a bit “slipped” (as will the future faces of those who have had facelifts, forgetting that in the end, “gravity wins out.”)

If you look closely at my old mantle, you can see some traces of soot, first from coal, then from oil, as I mentioned before. That soot is still there. I saw it not long ago when I visited with my friends Pam and Charlie who live there now. They told me that they scrubbed and scrubbed, but the baked-in black can’t be removed. (At least this isn’t as bad as that which is said to constitute the irremovable stain on the great rock at Chapel Hill’s Gimghoul Castle.)

The artificial snow on the roofs of those “petite” houses became somewhat darkened over time by the soot from our stove. It was the same for the snow on our mantle Nativity Scene, as if the little houses’ chimneys had not only “sooted” up their own snow, but had reached back 2,000 years to touch the snow on the stable of the Christ child (sort of like time’s continuity in reverse).

This composition of houses and stable on snow overlying a granite mantle reminds me of actual houses made tiny by their distance on snow-topped North Carolina mountains, great folds of rock underlying the snow and soil.

I still have a few of the miniature houses from my mother’s “creche-suburban” Christmas scene. Their faux-roof, faux-snow covering is darkened with both soot and age. They are far removed from the “mountain” of rock upon which my mother once placed them.

In one real house on the Old Concord Road, a matching “smoke” can still be seen on a “mantle mountain” made from Rowan’s literal foundation.