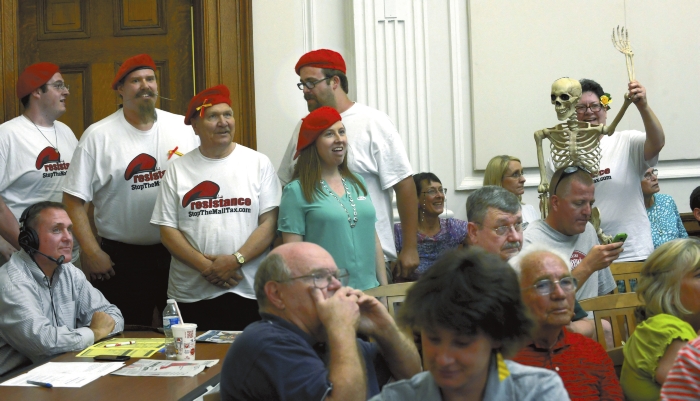 It all started with a Tea Party meeting and a character from the HBO television series “Game of Thrones.”

Local Super PAC La Resistance outspent many candidates in the 2014 elections, possibly affecting the outcome in the general election and ousting former Rowan County Board of Commissioners Chairman Jim Sides in the primary. La Resistance has been named the newsmaker of the year for 2014. The Post editorial staff chose the group after soliciting reader suggestions.

Despite La Resistance’s notable achievements during the campaign season, the group’s inception began with a Rowan Tea Party meeting and a conversation with an anonymous Facebook profile, according to the group’s founder, Todd Paris.

At the time of La Resistance’s creation, Paris said he was specifically worried about a rumored downtown exodus — county departments leaving downtown en masse after commissioners bought the Salisbury Mall.

“Because the whole thing kind of disturbed me, I decided to go to a Tea Party meeting,” Paris said.

Two days later, Paris said, he presented a resolution to the Rowan County Bar Association that opposed moving the Courthouse out of downtown. Paris said the resolution passed without a single “nay” vote.

Paris’ frustrations festered in conversations with an anonymous Facebook profile that was named Jon Snow. The profile picture was a yellow smiling face, much like Walmart’s logo. Paris said he didn’t make the connection at the time that the profile was, in fact, anonymous and tied to the HBO show “Game of Thrones.” Jon Snow — the name on the Facebook profile — is also the name of the illegitimate child of the lord of a major town in the show. Snow’s Facebook profile picture ultimately became part of La Resistance’s trademark image — a smiley face with a red beret on top.

The group transitioned from an idea to a political entity on March 31, 2014, when an independent expenditure political action committee — more commonly referred to as a Super PAC — was organized. A La Resistance political action committee was also organized in May 2014, but later closed because the group’s goals didn’t fit within the definition of a traditional PAC, Paris said. The main difference between the two types is that Super PACs cannot contribute indirectly or directly to candidate campaigns or parties. Instead, Super PACs must advocate political positions independently of a candidate. Donations from a single individual to a Super PAC are unlimited during a single election cycle. People can donate as much as they want to a Super PAC.

Though Paris, a Salisbury attorney, founded La Resistance, he had help from a bevy of individuals but two in particular — Jeremy Gardner and Roy Bentley. Gardner had previously helped current Salisbury City Councilwoman Karen Alexander in a campaign for her position, but Bentley was a newcomer to politics — a self-described armchair analyst.

At its core, La Resistance was centered on its opposition to the Rowan County Tea Party, according to Paris. In the primary, it successfully focused on defeating Sides, who did not receive enough votes to advance to the general election. He finished fifth out of eight Republican candidates.

In the general election, the group focused on defeating Gregg Edds, who was elected and is the current commissions chairman. It also targeted Dean Hunter, Travis Allen and Phil Hardin in the 2014 school board race.

A large gaggle of Rowan voters also switched their party status to unaffiliated as a result of La Resistance’s efforts.

As of the third-quarter financial reports, the latest available, La Resistance IE had receipts of nearly $11,000 over the entire campaign cycle, most from Paris. Its political action committee — La Resistance Rowan — had receipts of $2,785, bringing the total of all money received to more than $15,000.

Bentley said a large number of donations were in small amounts, $50 or less. Citing a private Facebook group, Paris said La Resistance’s peak membership was more than 200 at one point.

In the end, La Resistance endorsed Republican Jim Greene and unaffiliated candidates Raymond Coltrain and Gene Miller for three open seats on the county Board of Commissioners. For school board, the group endorsed all of the incumbent candidates running for re-election.

“There were lots of people in La Resistance that knew they didn’t like where the county was heading and the fact that on the regional, and even on the national stage a couple times, that Rowan County was being made a laughing stock,” Gardner said.

Greene was the only one of its endorsements to win a seat on the county board, though Coltrain was only several dozen votes out of third place. Just like in the Republican primary, Greene, Edds and Republican Judy Klusman finished in first, second and third, respectively. In both the general election and primary, Greene and Edds finished with a significantly larger percentage of total votes than the rest of the candidates.

Richard Miller and Jean Kennedy were La Resistance’s endorsed candidates who were elected to the school board. Kennedy ran unopposed.

But election results and member numbers aren’t the most significant result of La Resistance’s work, Bentley and Gardner said.

“I think the biggest thing that we did is made people talk,” Gardner said. “We really just tried to make sure people were paying attention.”

Perhaps another positive benefit is that Rowan residents are becoming more involved in politics. Bentley said some of La Resistance’s members are now applying for county boards. Bentley himself is one example.

“Some of them have applied for membership to county boards, to city boards, started showing up to commission meetings, and four years ago they had never even voted in a primary,” Bentley said. “So, in that sense, it brought some new blood and some new faces into local politics.”

Gardner said La Resistance plans to meet at the start of 2015 to decide on its involvement in municipal elections and any future races.