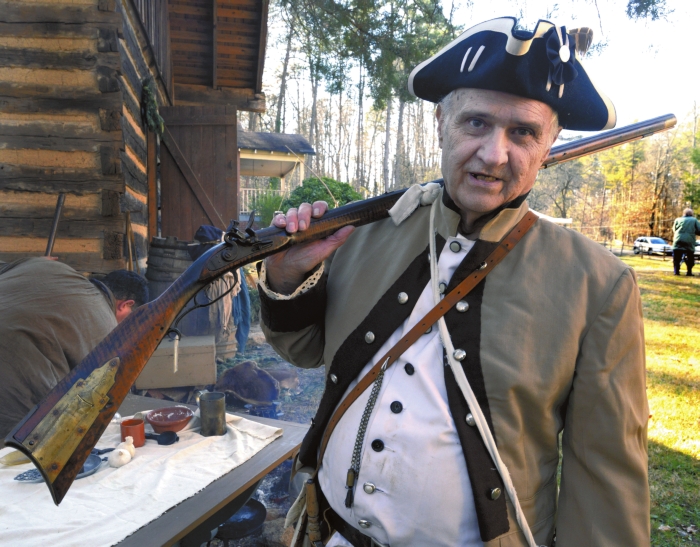 Jerry Brown carries an orginal Rowan long rifle on his shoulder at the Old Stone House 30th Annual German Christmas Celebration sponsored by the Rowan Museum. The rifle was made in the early 1800s. photo by Wayne Hinshaw, for the Salisbury Post

Mark Maness and his family are no strangers to the Revolutionary period costumes that abounded at the Old Stone House annual German Christmas Celebration.

The family members hail from Burlington and have been participating in re-enactments for 23 years. Maness and his wife attended the Saturday event with their adult son and other relatives. It’s the second year they’ve attended the annual event.

This is the 30th year of the event, which highlights Rowan County’s early settlers and is always held the weekend following Christmas. The house is closed during November through March but opens for the holiday celebration.

The Old Stone House is decorated each year the way it would’ve been during the pre-Revolutionary days, with simple greenery, herbs and berries. The event continues today from noon to 4 p.m. The cost is $5 for adults and $3 for students.

Guests receive a tour of the historic house and hear about the customs, see woodworking, basket making and candle making demonstrations.

The Old Stone House was built by German immigrant Michael Braun in 1766. Now owned by Rowan Museum, the two-story Georgian-style house is the oldest structure in Rowan County.

“Our interest is in history and preservation of North Carolina antiquity,” Maness said.

His wife is an educator, and the couple had demanding careers, so re-enacting was a way for them to escape. Their children also enjoyed it.

Maness said that while the weekdays often were hectic, the weekends were calm, and the family members learned something by re-enacting.

He also appreciates the museum staff and volunteers using their downtime to put on such an event.

Grace Walters and Shaylee Creel, both 11, volunteered at the event. Walters’ father, Chris, has volunteered with the museum since he was in high school. He’s now an assistant principal, as well as a docent at the museum. He brought five of his six children who also volunteered.

The girls said they enjoyed being able to play in the woods.

“I like how it helps people realize what it was like then, and you get to teach people stuff,” Shaylee said.

Robbie Cochran has been volunteering at the museum for the last 32 years. Cochran said he’s always been interested in history, and he comes out to the Old Stone House for the sense of freedom it offers.

Kendra Boovy of Mooresville attended with her husband and children for the first time. The family found information about the event online.

“It’s been very interesting. It makes your appreciate what you have now,” Boovy said.

Emilie Whitney, who is German, said she had previously attended the event with her husband before his death. This year another family member asked her to attend.

“I think it’s beautiful,” she said.

Samantha Okowita traveled from Tennessee with her husband, Alex, for the holidays, and the newlyweds attended the event with Samantha’s parents. Samantha attended history camp as a child and later served as a counselor.

She wanted her husband to experience what she did as a child. Samantha added it was neat to share the heritage of the area with her husband.

Janet Pyatt has been setting up shop at the event as a “peddler” for the last three years. The Mount Airy resident grows and dries her own herbs and sells colonial books at similar events. The books she sells are mostly published by the North Carolina State Archives.

She dove into the historical scene about 15 years ago when her children were younger and she volunteered at the Schiele Museum in Gastonia. She began as a historic interpreter, with an emphasis on teaching the public about history. She lived in Spencer and one day wanted to make her own pesto but didn’t want to pay such a high price for basil. Pyatt began growing her own herbs from that time on, she said.

When Rowan Museum Director Kaye Brown Hirst asked her cousin Netra Bollinger to make a basket, Bollinger didn’t have directions to follow, just an 18th-century picture. Bollinger, who is a seventh-generation member of the original Braun family, has experience making baskets, many of which she sells at farmers’ markets.

Bollinger said it took her six months to complete a chicken basket after Brown-Hirst presented her with the picture. She studied the picture and guessed at the rest and came up with a basket that would’ve held a chicken at the market. The intricate basket is made of wooden strips of varying length, with a hand-braided handle.

Bollinger said she learned to weave baskets from her great-grandmother.

The corporate sponsors of the event are F&M Bank and Miller Davis Studio.