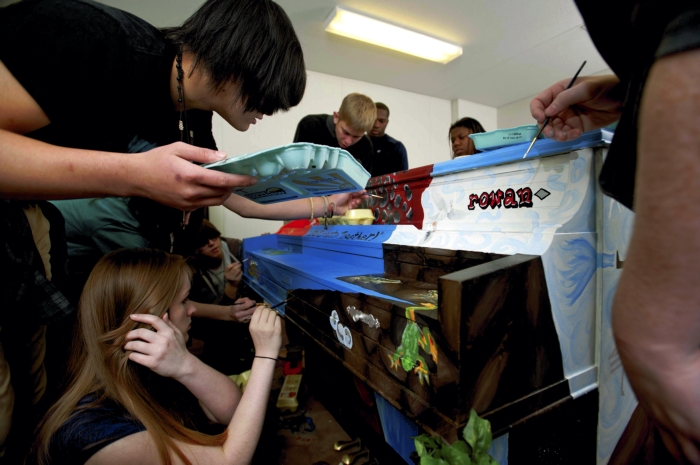 JON C. LAKEY / SALISBURY POST East Rowan High School honors art students work on painting the piano. Art students from Salisbury-Rowan Schools are busy working on a project to decorate donated pianos for a public art project. The pianos are supposed to be put on public display in Salisbury starting of May and stay in place to September.

Local high school students will have their artwork displayed throughout downtown Salisbury from May until September for the public’s viewing – and listening – pleasure.

Working pianos were donated to North, South, East and West Rowan; Carson; Salisbury and Henderson Independent high schools, and art students at each school are putting their talents to work to decorate the pianos.

It’s all a part of “Come Tinkle Our Ivories,” a public art partnership between the Salisbury Symphony and the Rowan-Salisbury School System. The instruments will be unveiled May 1, and will be displayed outside of shops all day every day on Main Street in Salisbury until the end of September.

Carson is one of three schools that have made considerable progress on their piano so far. Their piano is based on the book, “The Timekeeper.”

Art teacher Dr. Mark Riley read the book by Mitch Albom to his classes earlier this year, and based on their response to the book, he suggested they use it as inspiration for the piano project.

“We wanted to create the universe of time,” Riley said. “The one thing we’re all wanting is more time.”

It took a while for the students to build interest in the project, but once it started coming together, interest grew rapidly.

“It’s got the fingerprints of a lot of kids on it,” Riley said.

The base of the piano is painted in dark colors, and galaxies are painted on they key cover and the front of the piano.

Raquel Sanchez, a senior, formed the words “time” and “keeper” out of clay, and they are attached to the piano’s front at the top. She also painted the galaxies on the front of the piano. Sanchez gouged swirly lines in the wood before painting the constellations to create depth.

Iridescent glass beads cover the legs and line the front right under its keys, and three working clocks fashioned to look like clock gears are mounted to the front of the piano

Old keys and old postage-stamp-sized portraits are adhered to the front, and planets are painted on the piano bench.

Riley has playfully nicknamed Curiel the “bead queen,” since her special project was gluing the beads to the piano.

“The glass beads actually took the longest,” he said.

“It was kind of hard because they kept falling,” Curiel said.

The piano was a class project and took only about a month to complete after students started in November.

Not only was the project popular amongst the students, but other staff members caught on as well — so much so that the art class has been asked to tackle another piano project next semester.

“We’re going to ‘Shrek-erize’ it,” Riley said, explaining that they plan to decorate it to be used during the spring performance of “Shrek the Musical.”

South Rowan, on the other hand, sought inspiration from Van Gogh’s painting, “The Starry Night.” Students are fusing glass pieces in their art class to attach to the piano and are including some China Grove landmarks in their work, as well.

The Salisbury Symphony is in the beginning stages of its fundraising campaign for “Come Tickle Our Ivories.”

Tax deductable gifts can be made to the symphony made online, by calling the symphony office or mailing in a check.