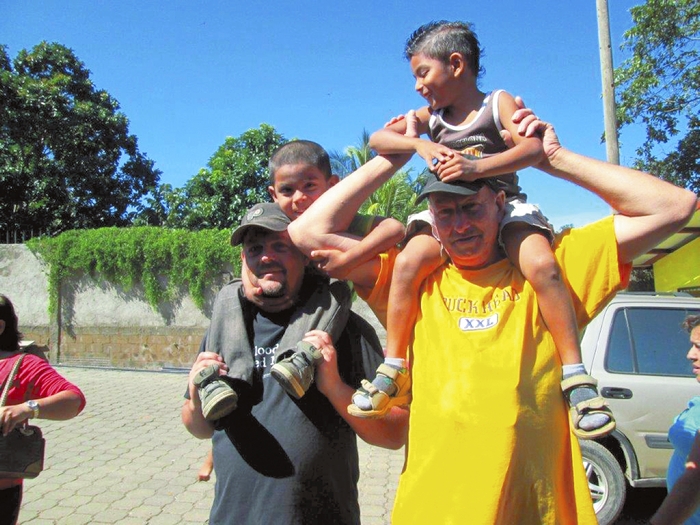 In Managua, Nicaragua, human trafficking is legal. Drive-through brothels are common. Many women, often as young as five or mature grandmothers, have known no other life. They have little self-worth and no life skills to generate dreams for a better future. Most have lots of children who know no real father.

With three church members already veterans of a mission trip to Nicaragua, Pastor Ken Koontz of Northgate Church asked if other members of the congregation might be interested in going on an early December, 2014 return trip. Volunteers included six more members of Northgate and another from Destiny City Church, also from Salisbury.

The new mission team asked for support and Northgate members rallied around them with a yard sale, youth hot chocolate and cookie sales, donations, and lots of prayers. Mission trip veterans Elizabeth Lattimore, Michael Judd, and Wendy Jarrett told the others what to expect and how to prepare. The other team members included Michael Mitchell, Ira Cady, Joseph Pettus, Savina Daniel, and Sarah Lioce from Northgate and Lydia Wood from Destiny City.

The team planned to spend their days working with House of Hope doing construction and ministering to the prostitutes and their children. The trip was planned for December because temperatures in Nicaragua are most comfortable at that time. High temperatures range in the upper 80’s and lows are usually in the 70’s. It is also the dry season.

The group left Northgate Church at 3:30am on December 2nd and arrived in Managua at about 2pm EST time that afternoon.

April Havlin, a North Carolina native, established the House of Hope in 2004 while ministering to only two women. Since then, House of Hope has constructed on-site residences for former prostitutes and their children. Currently about 56 women are residents along with their children, most living in 400 square foot houses. An outreach program called “Tuesday Morning” serves as many as 300 current prostitutes in the area. Full time residents are required to complete a 4 ½ year program that teaches basic life skills built around Christian ministry. They learn to cook and care for themselves and their children, and get services from a psychologist and a medical team. They get training in computers, sewing, and much more.

Women residents who complete the program are given mini-grants of $75 to start a small business to support their families. Businesses include selling jewelry or baked goods, cooking, ironing and washing clothes.

The “Tuesday Morning” program is intended for those who still work in the brothels. Buses are sent for them each week with women and their children arriving to spend a good part of their day at House of Hope. They begin with a Christian worship service and after the service they clear the floor and set up work tables. Each table has an experienced leader and is responsible for making jewelry. Money from the sales of the jewelry is used to pay the women workers, all of whom are still active prostitutes. After eight weeks, each worker receives a check. Jewelry sales, often to churches in America, also help fund other House of Hope projects. One of those projects is to provide uniforms for the school age children of the women residents. School age children wearing uniforms are usually not targets for prostitution. Another project includes buying out the debt of prostitutes from the pimps, therefore clearing them to leave the brothels.

It was into this environment that the ten team members went. They stayed in Hotel Caesar, one of the better hotels in the area, and rode a small bus to the House of Hope each day. Roads were poor and very crowded, with large ruts always part of the trip on the bus. There were no road signs, but there were directional signs to tourist areas. People sold things to the passing vehicles, often putting themselves in the edge of the traffic lanes to do it.

Joseph Pettus said, “Our work day was about 8am to 4pm. The group divided up into one team of five builders and another five who would minister to the women and children. Sarah and the four men went to continue the construction work on the resident housing. Sarah really kept us going. We worked with Norman, their head of construction and maintenance. We were pouring sweat and the heat didn’t bother him at all.” Northgate funded $5,000 that covered the construction of one house.

Elizabeth Lattimore said the focus for the other group was just to serve. “We spent a lot of our time working with the children. We told stories from the Bible and did a lot of personal ministry afterwards. We helped organize the place.” Wendy Jarrett designed jewelry and made models for the women to copy in their work time after the “Tuesday Morning” worship service.

Lydia Wood used her expertise to cut hair for the residents. She said, “The busiest day for me included 15 haircuts, all of it without an interpreter. We used sign language to exchange ideas. One finger, two fingers…however we could communicate. The language of women’s beautification is international.”

The whole mission team helped with a Christmas Party for all the women and children, providing food for 360 treat bags. The team also took the House of Hope women’s staff back to the hotel for a spa day. The men took Norman out for lunch and gave him tools. Pettus said, “Norman told us that one of the tires on his moped was flat and he couldn’t afford to get it fixed. We got him the tire and he was so appreciative.”

The team learned about Nicaragua and Managua in particular. Judd said, “Nicaragua goes back and forth with Haiti as the poorest country. There are no emission laws and something was always burning. It was always dusty and we appreciated an area at the hotel where we could breathe well. We made sure to be back at the hotel by dark because it wasn’t safe to be out after dark. We heard lots of firecrackers, but some gunshots too during the night.” The electricity is sporadic at best and running water is hard to come by.

Just as important was getting to know the women and children at the House of Hope. Savina Daniel said, “The women have never known how to have relationships and have poor social skills. They have so much anger from years of abuse. The discipline and love that they are shown helps them to let loose of their anger.” Often the women are sold into prostitution by their own families. One resident left teaching to make more money in prostitution. Most learn to refer to their pimps as husbands because they know none of the children’s fathers. Pettus and Judd found the children starved for the attention of the males in the mission group. Women keep clean and dress themselves and their children as well as possible.

The mission trip to Nicaragua had a lasting effect on all the team members. The residents wanted pictures with the group and gathered to offer prayer for the team as it came time to leave. Jarrett said, “After two trips, the ladies are starting to connect. They wanted to know when we could come back.” Daniel found that the women want desperately to get out of prostitution, “One of the women actually cut off her arm with a machete so that she could leave that life behind.”

Just as important, team members had new perspectives on mission work. Pettus said, “When the plane took off, I was glad to be going home but at the same time I was so sad to be leaving. While each of us knew the rest of the team before, we had so much to share at the end.” Wood added, “I was totally overwhelmed. Their situation really hits you. I thought earlier how I could go there and not cry every minute.”

After returning to Salisbury on December 10th, Lattimore remembered one of the residents asking to have a picture made together because she had no family there. She said, “I had ministered to this woman the day before. I’ll never forget her. We will have our date soon to return in 2015. The whole team is planning to go again.”

But possibly more remarkable is that few of the women have dreams of a better life while working the brothels. Havlin had a different resident tell of her own dreams each day, proving that the ministry at House of Hope is making a real difference. So did the mission team from Northgate Church, both in Nicaragua and in their own lives.