On Christmas Day, some keep things moving while others celebrate 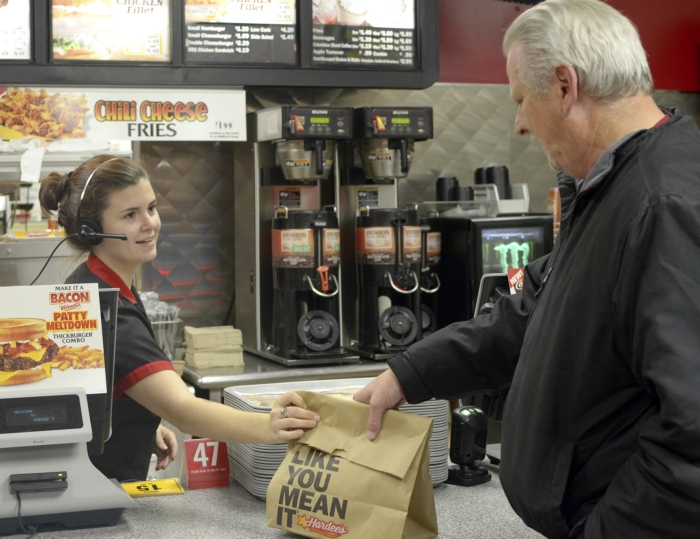 Hugh Fisher/For the Salisbury Post Jessica Price serves up an order at the Hardee's restaurant in Rockwell on Christmas Day. Hardee's was one of the handful of businesses that opened on the holiday.

While many families opened gifts, cooked and ate, and worshipped on a clear, cool Christmas Day, others were hard at work, keeping the lights on at area businesses.

“It’s been busy pretty much all day,” said Mary Gilman, at the Kangaroo convenience store on U.S. 52 in Rockwell.

A steady stream of customers came in as she was talking, most of them buying fuel, drinks or cigarettes.

Scratch-off lottery tickets had also been selling well in the days leading up to Christmas, and some had brought theirs in to claim prizes.

One customer greeted Gilman by name and wished her merry Christmas before going to fix a cup of coffee.

“Pretty much all of my customers are regulars,” Gilman said.

Other than the fact it was busier than usual, Gilman said Thursday was an ordinary day at work.

A place to go

Not far away, at Hardee’s in Rockwell, Jessica Price helped pack orders to go after what she said was a busy day.

“Earlier there was a rush, and now it’s been slow for a while,” Price said. By 5 p.m., there were only a few customers in the dining room.

Price said she thought a lot of people were glad for a place to go on a day when many restaurants are closed.

“We’ve had a couple of big families come through,” said Grace Dimmett, one of the staff members.

In Salisbury, Starbucks Coffee on East Innes Street was open until 5 p.m.

“It was packed. We were very busy,” said staffer Jasmin Gonzalez. She said the coffeehouse was open from 5:30 a.m. until 5 p.m. Usually, they stay open until 10 p.m. on Thursdays.

Customers were still coming in even as the coffee shop closed, Gonzalez said.

Staff members said they didn’t have any special celebration at work, but stayed focused on serving customers.

Magistrate Mark Wilhelm was one of two magistrates on duty Christmas Day. He said that, by and large, it had been a quiet day for public safety personnel.

Wilhelm, a former Salisbury police chief, said that’s not unusual for the holiday.

“Starting on Christmas Eve, about 6 p.m., until probably about 6 p.m. on Christmas Day, it was like everything came to a standstill,” Wilhelm said. “With businesses closed, people pretty much stayed in, stayed at home.”

Calls for service usually started to pick back up again after dark on the evening of Christmas Day.

“You know when you take the job you’re going to have to work some holidays,” Wilhelm said.

No shortage of shoppers on Christmas Eve