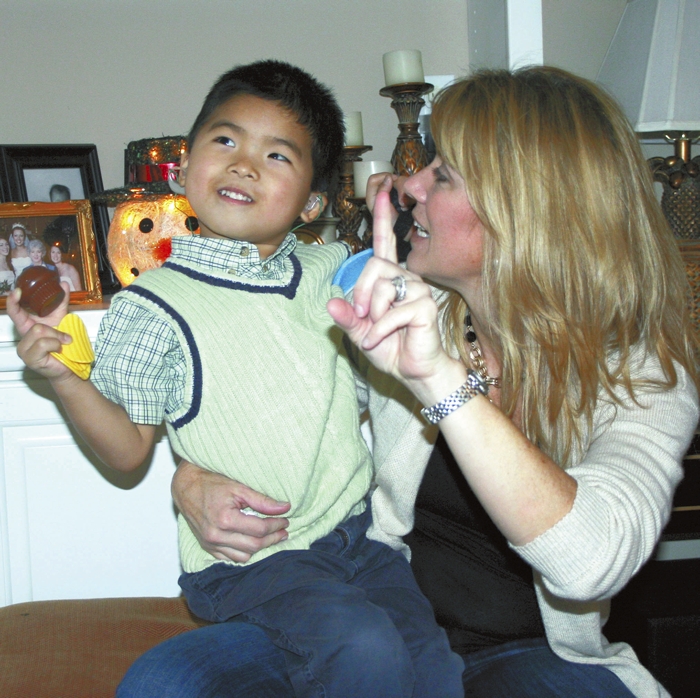 Luke Yang zooms through the family room, miniature grocery cart in tow. Laughing and smiling, he makes his way through the hall and the kitchen, only to zoom back through again seconds later.

This happy 6-year-old is clearly the apple of his family’s eye — and the center of attention these days.

He came home to his dad, to big brothers John and Alex, 16, and to the family’s dog, Major, a standard poodle. “Major” was the first English word he learned, his mom says.

Steve and Lori Yang had thought about adoption even before they had a family. After their five children were born — their son, Michael, died in 2001 — they still felt a calling to adopt. (See sidebar).

A couple of years ago, the couple started looking for a child in South Korea, where Steve was born. But near the end of the process, the mother took the back the young boy they had chosen. Three months later, Lori was searching on the computer and found an adoption Web site for special-needs children. That’s when she saw a video of Luke.

“I could not go through that again,” Lori says.

“We went the safer route, I guess,” Steve says, as the Chinese adoption process is much more predictable.

After seeing Luke’s video, Lori was intrigued, and asked for his file. She learned he had severe to profound hearing loss and malformed feet and hands. He’s missing both middle fingers, and two middle toes on each foot. He had been abandoned, and was living in an orphanage. Steve and Lori completed the process a second time, and in early November, Lori and the girls left for China. At first, things did not go as well as Lori had hoped.

“There were a lot of rough spots, which made Dad feel guilty and scared,” Steve says.

The four of them were cooped up in hotel rooms, not the best place for an active little boy.

“I felt like he didn’t want to be with me,” Lori says. “Thank goodness I wasn’t there by myself. I felt like it was going to be OK in the long run.”

She admits, “He was really bad for me,” something she’d never encountered with her children.

“But I’ve had them since they were born,” Lori says. “I probably put the fear of God in them.”

Lori and the girls had brought along small toys for Luke, and photo albums of his new home.

“We got a lot of dum-dum suckers,” Ashley says, which also helped.

And they FaceTimed frequently with Steve and the boys. So much so, that when Luke got up every morning, he’d point to the computer and say, “Baba! Baba!” looking for his dad.

When they met at the airport, it was a surreal moment, Steve says. “I could tell he was thinking, hey, you’re the guy on the phone! He realized that I was a real, live person. It was exciting, and it was emotional.”

For the past month, the family has been busy adjusting to life with with a young child again.

“We thought we’d have a shy, quiet boy who’d have culture shock,” Steve says. “We got the opposite. He was raring to go as soon as we got home.”

Lori says the adoption agency advised them to hibernate the first week or so, but John and Alex had basketball games, and Luke went right along and sat through the whole thing. He’ll get used to watching his siblings in action. Ellen plays volleyball, softball and basketball, and John and Alex also play baseball and run cross-country. Ashley plays softball and dances.

“He doesn’t mind being in the car,” Lori says, clearly a good thing for this family.

In January, Luke will start the pre-kindergarten program at St. John’s Lutheran Church.

“We went and visited and he’s very excited,” Lori says.

Although he had a brief medical exam before Lori left China, he’ll be evaluated next month at Baptist to determine the extent of his hearing loss.

“He should be speaking English in three to six months,” Steve says, “but our issue is that he has profound hearing loss. We don’t know how it will affect his English.”

He’s also already had some dental work, thanks to his dad, a dentist.

“I thought his teeth might be bad,” Steve says, “but it was a little worse than I expected.”

Still, Steve says, “He was a good patient. We cleaned his teeth and he loved it.”

John and Alex love having a little brother. They take the time to show him how cellphones and iPads work, as Luke is fascinated with technology.

“This has been good,” John says. “We have a cousin the same age. It’s fun to have a little brother who likes to play and have fun.”

“They need to be studying,” Lori admits. “I’m hoping it doesn’t affect their grades too much.”

John and Alex are juniors at Salisbury High School. They work at Chick-fil-A, and are busy looking at colleges. So far, Wake and Carolina seem high on their lists.

The Yangs are trying to figure out what food Luke likes best.

“He loves soup with noodles in it,” Lori says, and he doesn’t mind his food mixed up.

“We went to this restaurant in China, and there was scrambled eggs,” Ashley says, “and he put Pepsi in it!”

To remind him of his Chinese heritage, Lori bought Luke a tea set and a set of cufflinks, both of which she hopes he’ll use when he’s older. She’s been learning some Chinese words, and she’s just learned “jia.” It means home. It also means family.

Now Luke Yang has both.