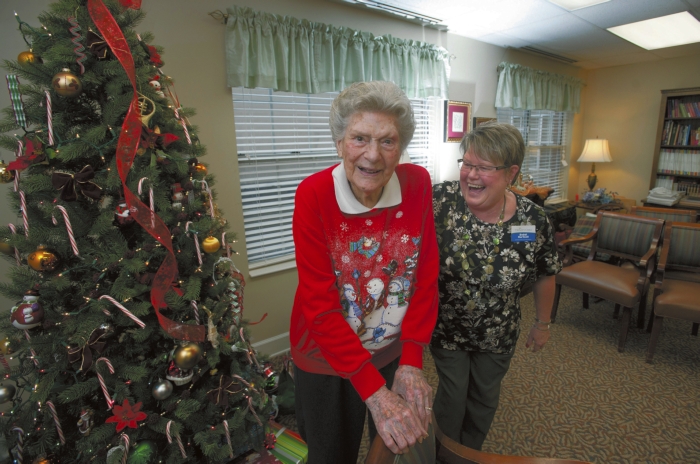 JON C. LAKEY / SALISBURY POST Evelyn Barnette and Bobbi Hartsell sing a few verses of "We wish you a Merry Christmas" in the Activity Room. will turn 100-year-old on December 27th. Barnette, who lives at Trinity Oaks Assisted Living, said during a recent interview that the only thing bad about having a birthday so close to Christmas is that the celebration is alway lumped together and she usually only got one gift.

Evelyn Barnette didn’t like Christmas too much when she was growing up.

She was born on Dec. 27, 1914, and every year during the holidays she’d get a present on Christmas but not on her birthday, she said. She once asked her mother if she could have two small presents instead of one big one.

In fact, Evelyn said, her mother wanted her to be born on Christmas and tried to make herself go into labor by moving furniture around the house.

Instead, today is Evelyn’s 99th Christmas, and she’ll turn 100 on Saturday.

Evelyn’s childhood dislike of Christmas has faded over the years. She likes to sing Christmas carols. Her favorite one is “Silent Night.”

“I can’t carry a tune,” she said. But she sounded pretty good when singing “We wish you a merry a Christmas.”

Her favorite holiday food is fruitcake, she said, even though she’s not supposed to have nuts.

She lives at Trinity Oaks, where her daughter, Beverly, also lives.

Evelyn and Beverly have always enjoyed being together on Christmas. In fact, Evelyn and her husband, Jerry, adopted Beverly on Christmas Eve in 1954 from a children’s home in Greensboro.

On Dec. 1, Jerry and Evelyn had adopted another girl, Angie, from the home.

Beverly said Christmas time was nice in her family’s home, and that they always had a Christmas tree. She and Angie would examine the wrapped presents under the tree on Christmas Eve before going to bed, Beverly said, but then couldn’t sleep because they were too anxious about opening presents in the morning.

She said the mantles in their home were always decorated during the holidays and little stockings were hung.

“Christmas was very good as a child,” Beverly said.

Evelyn said she liked to throw snowballs and make snowmen on the few occasions when there was snow on the ground when she was growing up.

Evelyn has spent her whole life in Rowan County. Before adopting the two girls, she worked in accounting and for the Social Security Administration. Her husband was a postal clerk for Southern Railway’s route between Charlotte and Washington. Jerry passed away in 2001, and Angie was killed in a car accident in 1980.

But Evelyn still has Beverly, and Beverly still has her.

“She’s the best thing in my life,” Beverly, who is 60, said about her mother. They used to share an apartment at Trinity Oaks before Evelyn was moved to the assisted living area earlier this year.

Evelyn has a three-part recipe for a good life: Think clearly, Act wisely. Walk humbly with my God.

She said she read it somewhere and thought, “That sums it up pretty good.” So she wrote it down to remember.

Growing up, Evelyn never thought about getting old, much less living to be 100.

“It sort of creeps up on you,” she said.

Asked if she ever thinks the next Christmas could be her last, she said, “I know it could be, but I don’t dwell on it.”

This isn’t Evelyn’s first story in the Post. In the fall of 2010, a story was published about her quest to crochet 2,000 caps for newborn babies at the Rowan Regional Medical Center. At the time she was closing in on 1,800 caps.

She did reach her goal, and kept going. But she isn’t sure about the total number of caps she made.

She doesn’t make caps anymore. She said she’d like to start making afghans again but doesn’t have a pattern.

And today, she gets to enjoy another Christmas with Beverly.

Christmas in Carolville: Carol Lewis’ village display has a…