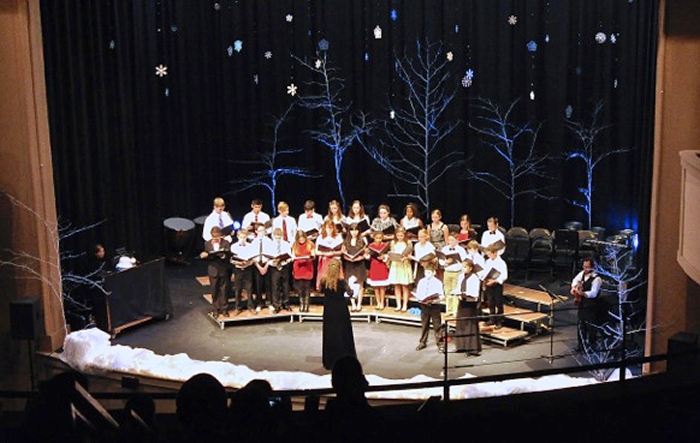 At first glance, there was nothing unusual about the Meroney Theater on Main Street in Salisbury the night of Dec. 4, but on that special evening the brightly lit marquee read, “North Hills Christian presents ‘White as Snow.’ ”

The lights dimmed and the stage curtain raised, revealing a winter wonderland before the assembled crowd.

North Hills Christian School’s first- and second-grade elementary chorus performed, sounding like the angels on that first Christmas night long ago – at least to the gathered parents. They were followed by the third- through fifth-grade chorus.

The second act featured the combined efforts of the first- through fifth-grade elementary chorus.

Choral director Susan Wilson then turned to the audience and talked about the meaning of Christmas and the purpose of Jesus dying on the cross.

The elementary performance ended with the young chorus students pummeling the audience with snowballs. The snowballs served as a reminder to everyone of the meaning of Christmas, the birth of Jesus who came to take away our sins and make us as “white as snow.”

The third act featured the middle school chorus. They also got to show off their language skills by singing in German “Stille Nacht,” better know as “Silent Night.” They also sang “Adeste Fideles,” broadcasting their Latin skills.

Transitioning from voices to instruments, the middle school band directed by Keith Howe took the stage, followed by the high school band.

The night ended with a crowd-pleasing performance of North Hill’s percussion group, Fresh Trash. The group used snappy moves and everyday garbage cans to entertain the crowd with an energetic percussion presentation.