No shortage of shoppers on Christmas Eve 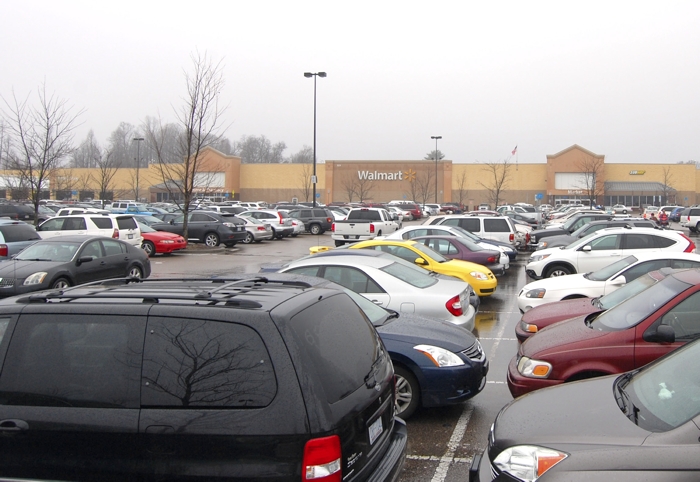 The parking lot at Walmart Wednesday was full with cars coming and going as people did last-minute shopping on Christmas Eve.

Throngs of people were at stores Wednesday in Salisbury doing last-minute gift shopping and making other preparations for Christmas.

The weather was rainy and foggy, but grocery stores were crammed with people stocking up on food for Christmas dinner.

At Harris Teeter on Jake Alexander Boulevard, Pedro Oliva was leaving the store with his 5-year-old son, William, and a cart full of food.

“Crazy in there,” he said about the mass of shoppers inside.

Oliva had just finished buying items for his family’s Christmas feast. On the menu is chicken and pork ribs.

And he wasn’t lying about the craziness inside the store. The aisles were full, and all of the checkout lines were long.

In the rear of the store, Jim and Daisy Nichols were picking out food for their family Christmas. They’re expecting 19 people to be at their house this year including their first great, great granddaughter, Sloane, who was born on Thanksgiving.

The Nicholses celebrated their 65th wedding anniversary in September and said Christmas is always at their house. On the dinner menu are prime rib, green-bean casserole, mashed potatoes, turkey, cranberry sauce and broccoli casserole. For dessert they’ll be having spice cake, coconut cake and pumpkin pie.

“We’re going to have a big, wonderful celebration,” Daisy said.

Roads were filled with traffic Wednesday afternoon, and the worst of it was probably along East Innes Street near the intersection with Arlington Street. It seemed everyone was going to Walmart.

The huge parking lot was nearly full, with a steady stream of cars coming and going.

After a trek across the lot to the store entrance to get out of the misty rain, much maneuvering was required inside the store to avoid being run over by other shoppers, their carts filled with everything from food to flatscreen TVs.

The number of shoppers was impossible to estimate. They came and went like they were on autopilot.

But Holly Kesler was a calm presence among the storm. “It’s what I expected,” she said about the crowds.

She was looking for toys for her two girls and one boy.

She said she’d already bought an iPad and wasn’t being too picky about what else to get.

Christmas Eve can be crazy, but Christmas Day always brings with it a sense of normalcy.