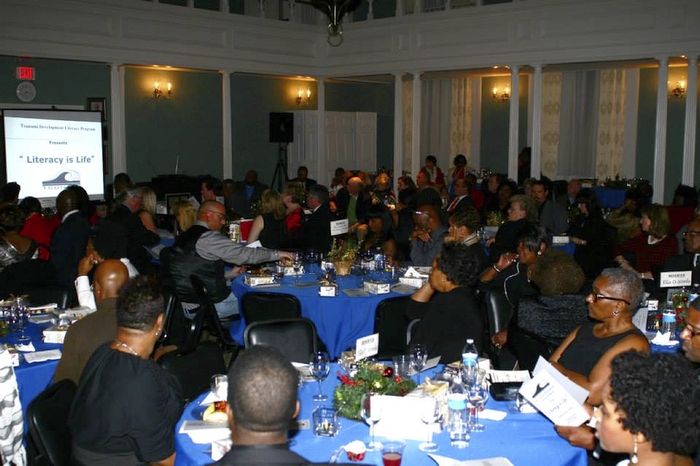 “I just want to help children read.” With that simple statement, Dr. Avis Williams opened the first Literacy is Life fundraiser at the Rowan Museum Saturday night. Williams, president of the newly emerging Tsunami Development Literacy Program, welcomed a crowd of 160 local and state politicians, community leaders, former professional athletes and other Salisbury residents who came together to raise money for the group’s literacy goals.

A short video created by and featuring members of Tsunami set the tone and intent early in the evening. A child was shown walking down the hallway of a local elementary school. As he cautiously made his way towards an exit door, glaring statistics denoting the impact of low literacy emerged on the screen as he passed individuals who could have a positive impact on his young life. He began the slow trek closely watched by a principal, followed by a coach, a business leader, a law enforcement officer played by Sheriff Kevin Auten, and a pastor. The walk ended with the young child’s progress being halted at the door by an ominous-looking thug character. The video’s message was clear as to what the potential outcome could be if people don’t come together to give every child the gift of reading they deserve.

Williams echoed the sentiment saying, “As an educator, I’ve seen the challenges teachers face working with middle and high school students who struggle with reading. Our goal is to impact children before they reach that level.” Tsunami will focus on providing literacy training to third- through fifth-graders graders in the Salisbury-Rowan area.

Williams added, “Low literacy impacts the local economy, employment opportunities, and overall quality of life. We’re excited to bring the Community together and to partner with local businesses, the Rowan-Salisbury School System, and individuals to impact literacy. We need social clubs, athletic teams, businesses, student-led clubs and other organizations to volunteer their time and expertise with us to make this a success.”

Retired educator Ella D. Woods, the group’s executive director, did not hold back her enthusiasm as she gave the near capacity crowd the history and evolution of the group. Her short stature almost kept her hidden behind the podium, but her excitement for the night’s event could not be obscured. She spoke from the heart offering, “I became an English teacher because of my love for the written language. It’s a passion of mine to instill the importance of reading into young people not only for their enjoyment, but also for their survival in our competitive world. I want people to really wake up to the fact that literacy is essential if we are to participate in the world around us” As she closed out her remarks, she showed her love for reading by surprising the crowd with gift copies of the book, “A Miracle on 34th Street.”

As the light smell of heavy hors d’oeuvres wafted about below, the mellow music from a jazz trio perched atop the room softly hovered over the crowd from above. This was a perfect accent and complement to conversations and participation at the tables of silent auction items that lined two walls of the room. The items for bidding were as diverse as the crowd and ranged from autographed athletic items from Salisbury’s Bobby Jackson and other professional sports figures, coaches and teams. The tables were also covered in art pieces, various restaurant offerings, home improvement/décor items, golfing packages, automotive goods from local dealers, and many other generous donations from local businesses.

The highlight of the evening was the guest speaker, Perry Tuttle, who is an ACC football legend. His impressive athletic résumé includes All American status as a wide receiver at Clemson and retiring as an all pro having played in the CFL and with the NFL’s Atlanta Falcons, Tampa Bay Buccaneers and Buffalo Bills. Tuttle spends his post gridiron days traveling the country as a motivational speaker and executive leadership coach. He worked the room not as a celebrity, but engaging everyone in conversation who approached. He graciously signed copies of the famous 1982 Sports Illustrated cover of his celebration after making the game winning catch to win Clemson the national championship in the Orange Bowl.

What made his speech so remarkable was the absence of tales from his football life. Instead, he placed emphasis on allowing the room to become part of his personal life for 20 minutes by sharing heartwarming stories of his family life and how literacy played an important role.

He began his speech by openly acknowledging he was slowly losing his eyesight to a degenerative disease and would be blind in a few years. Instead of seeking pity, he shared a story of how he had hoped the disease would progress slow enough to allow him to see his son play high school football. Many in the room were moved to tears as he described being able to coach his son’s team recently and watching him catch a game-winning touchdown. He finished the emotional visual by saying the two stood mid-field crying and embracing, not because of his son’s game-wining feat, but because they knew his wish had been realized.

Amidst other personal examples of his love for his six children and his wife of 26 years, he shared how literacy has played a role in their lives. He humorously recalled encouraging his son to read one of his favorite books. When the son quickly returned the book, he asked him about the contents on a specific page. It was obvious to him his son failed to read the book although he repeatedly assured his dad he did. As he pressed his son to explain the content on the specific page, he turned to the page in book to reveal he had taped a $100 bill with the lesson that reading will pay you.

He regaled the crowd further with personal stories of how he had written a love letter to his then girlfriend, now wife, and how she returned it with spelling and grammar corrections marked in red ink. After acknowledging to her that reading and education were not important to him then as a NFL star, he recalled her response as pivotal to his looking at literacy differently. She said to him, “The person who doesn’t read is no different from the person who can’t read.”

He spoke fondly of going on daddy-daughter dates with each of his girls as they grew and how those interactions turned into his writing his third of five books.  He recalled how his daughters would ask him personal questions during the date in an effort to get to know the real him, so he turned their 15 allowed questions into a book that any father could use to strengthen his relationship with their children.

He pulled the crowd further into his personal life by sharing heart-wrenching stories about a drunken, racist and abusive father. He balanced those difficult stories by talking about a caring mother whose love and support knew no boundaries. He introduced other memorable characters who had a profound impact on his athletic success later in life. He spent significant time remembering a coach who told him in the fourth grade that one day he would be in the NFL. He recalled how those words of confidence prompted him to dream throughout the various stages of his athletic participation until he did make it to the pros. Tuttle cautioned educators in the room to be careful what they said to child as it could have a lifelong impact. Instead, he implored, “Tell them something to make them daydream.”

Chris Sifford, founder of the Chamber and one of the four original architects of Tsunami Development along with Kenneth Hardin, Nicolas Means and Pastor Anthony Smith, presided over the most important part of the night.  He took to the mic and individually recognized the five Top Tier Sponsors of the evening and thanked each for their generous and unselfish financial contributions. As Sifford highlighted each sponsor, he shared how he forged business relationships and told humorous personal stories of their bond.

Means, a local F&M branch manager, spoke of the bank’s unyielding commitment to the community and how they encourage and support his involvement with youth. Daniel Cook, a South Rowan alum and current pastor and president of The Sanctuary of Wilmington, Inc., spoke fondly of being a former student and player under Sifford. He shared examples of the community outreach his church is providing in Wilmington and how he’s proud to be a supporter of literacy efforts here in his hometown. Former NFL Coach Joe Gibbs sent silent auction items and had several representatives from his NASCAR team’s outreach ministry present. Their Game Plan for Life youth mentoring program already has a strong presence in the Rowan-Salisbury schools. Spokesman Derrick Crawford made jokes at Sifford’s expense about his introduction to NASCAR racing and his golf game, but turned serious when discussing Joe Gibbs Racing’s commitment to literacy and supporting the Tsunami Literacy efforts. Former educator Woods kept her remarks short, but recalled enjoying working in the classroom with Sifford and the difference she has made in many students’ lives.

Current County Commissioner Craig Pierce gave credence to the motto of saving the best for last and left a room full of dropped jaws by the end of his remarks. Pierce started his remarks with a bit of political fire and flavor as he touched on the current state of education, the challenges faced locally and the politics surrounding funding efforts. He provided a quote of what it would cost to create a similar program with paid staff and praised the group’s leaders for doing this on an all-volunteer effort seeking out community-based resources. He shared with the attendees how the previous county commission worked with the initial core architect group to help ensure the program’s success by collaborating on their business plan and providing rent-free space for five years in the West End Plaza. From the mic, he urged others to support the group’s literacy efforts financially and not just make verbal promises.

Sifford remarked how Pierce has long been viewed as an unselfish financial supporter of community efforts involving youth and has given generously, stating, “As long you come to him with a plan.” Pierce continued his trend of generosity by making the offer to personally pay for all the group’s utilities at the Plaza for the remaining time he serves as a commissioner. Thunderous applause erupted, but Pierce was not done giving. He stunned the crowd into audible gasps as he next offered to sign over a vehicle to the group from his custom car collection. As the crowd gave him a standing ovation, he said that once in the group’s possession, they could sell the car and use the profits for their literacy efforts.

Early in the evening a song played over the gathering crowd and part of the lyrics were written on the back of the event’s program, “The world won’t get no better if we just let it be. The world won’t get no better, we gotta change it just you and me.” The Tsunami Development group proved they’re trying to make Salisbury and Rowan County better with their fête for literacy that brought many different worlds together for one important cause.