Christmas in Carolville: Carol Lewis’ village display has a story to tell 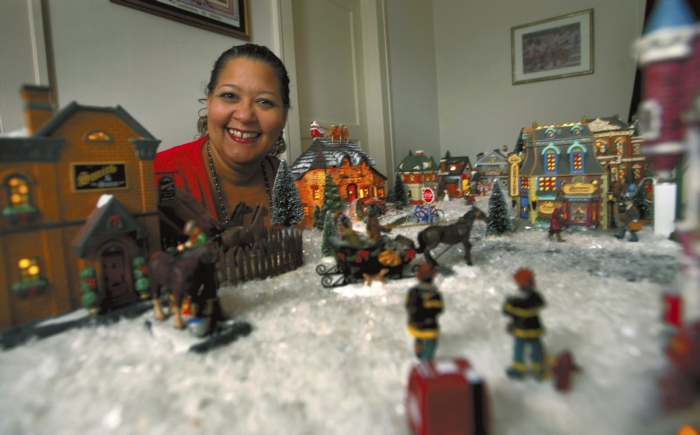 SALISBURY — When it comes to celebrating the holidays, it takes a village.

This year marks the 10th Christmas that the Lewis family has spent a good part of the holiday season in Carolville.

You won’t find this city on a map, and Google can’t tell you how to get there.

But, over the course of a decade, it’s grown rapidly to encompass five “counties.”

Carol Lewis’ Christmas village takes up most of a room in the family’s South Caldwell Street home.

It evokes the memories of Christmases past and present, and echoes some of the places the Lewises knew and loved from their old hometown, Chicago.

Carolville has a shopping district, an airport, a football stadium (“Our team is the Bears,” Carol said proudly) and a hilltop resort.

Also, there’s a treehouse for kids to look out over the city,  a train that runs through the middle of town and, as of 2008, Carolville’s first Walmart store.

Carol, her husband, Orlando, and their three children have celebrated each Christmas with Carolville for 10 years running.

From five little houses, originally dollar-store tree ornaments, Carolville has grown and developed a story of its own.

Orlando is vice president for student affairs at Livingstone College. Carol has worked in higher education and, more recently, for McDonald’s as a business analyst.

Each year, starting around Halloween, Carol starts planning the family’s Christmas village – getting out the figures and buildings, setting up the lights, arranging tables.

She spreads a layer of new “snow” over the streets, and arranges sand along the miniature seashore.

After a decade, Carolville is more than just decorations or a family tradition – it’s a part of their world.

It all started before Christmas 2005, with five little houses purchased for 50 cents each.

“I didn’t even know that Christmas villages were ‘a thing!’” Carol joked.

She said she went to a local dollar store and picked up Christmas tree ornaments – five little Victorian houses.

Problem was, they were too heavy for the branches of their Christmas tree.

So, she set them up elsewhere – the first “neighborhood” of what was to become Carolville.

Then, Carol said, she found some little figures of people. The city started to grow.

Today, Carolville has a wide range of neighborhoods, each to scale.

There’s a waterfront community, which reminds them of the beach on the North Lake Shore in Chicago – right down to the sand and seashells on the shoreline, and the ceramic lighthouse that glows above.

And, in addition to a Lowe’s, an Ace Hardware and other stores, there’s a ceramic Menard’s store – an Illinois-based chain the Lewises remember fondly.

Carol’s birthday is three days after Christmas. As years went past, friends and family started buying her pieces to add to the Christmas village.

As the city grew, so did the legend.

Over the years, as their three kids, Anthony, Tyler and Lindsey, got older, their mother started keeping track of the “history” of Carolville.

This year, there’s a booklet, printed with a color cover.

Life is pretty good in Carolville, the Lewises say.

“My gas is the cheapest in town,” Carol said, pointing to the old-time service station. “Twenty-five cents a gallon!”

There’s almost no crime, she said, but there is a police station.

“Sometimes, you might have a fender-bender, or something like that,” Carol says, with a grin. “No major disagreements.”

But, as the family talked about ideas for how the city could continue to grow, Carol said they looked at all the buildings a real town might have.

“I had all the other important buildings,” Carol said, from a fire station to the newspaper office – home of the Carolville Gazette.

A hospital seemed like a logical choice, but the only model Carol could find was one of a children’s hospital, she said.

And so, a new part of town was created, centered around the children’s hospital.

“There’s a bed and breakfast,” Carol said, pointing to the home next door. “When the families are here, they have a place to stay. There’s a cafe, too, so they can get something to eat.”

There’s a toy store, and across the square, a flower shop – placed there so that parents and friends can buy gifts.

And when the kids in Carolville get well again, there’s a candy store and a bicycle shop for them to enjoy.

In the center of that urban square is a wishing well, surrounded by a field of snow.

“It’s there so the families and friends can make wishes,” Carol said.

Small as it is, the well represents very big, real wishes that parents and friends would make to see their children safe and healthy again, especially at Christmastime.

City With a Heart

Some evenings, Orlando said, he brings a chair into the doorway of the room.

With only the lights of the Christmas village glowing, he said, it’s fun to look down the carefully-arranged streets.

“You notice different details,” he said.

Over the years, Carol has kept the “history” of Carolville. And who better?

After all, she’s the mayor and the city planner.

“For the kids, this is their village that they’re sharing together,” Orlando said.

“It just looks like it comes alive,” Carol said, looking out over the snow-covered streets.

The Lewises say friends and family have encouraged her to share Carolville with others in years past.

“It really grabs my heartstrings and fills me with joy to see the children come in and look at it,” Orlando said.

Especially for Destiny, their only grandchild, who’s 4 years old this year. “Just to see her eyes light up with joy when she walks into the room,” Orlando said.

When friends and family come to visit, Carolville is always a destination.

This year, the whole family can’t be together on Christmas day. One son who’s away at school had to work and couldn’t make it back to Salisbury right away, Carol said.

But the Lewises say they’ll try to keep Carolville there waiting for him until he gets home to celebrate.

The real world can be gray, cold and rainy at Christmas.

For Carol and Orlando Lewis, the village they build every Christmas season is a part of their home, and a place they say they love to share with friends and loved ones.

After all, Carol said, “Life is good in Carolville!”

And at Christmas, especially, every family deserves a place to come home to.