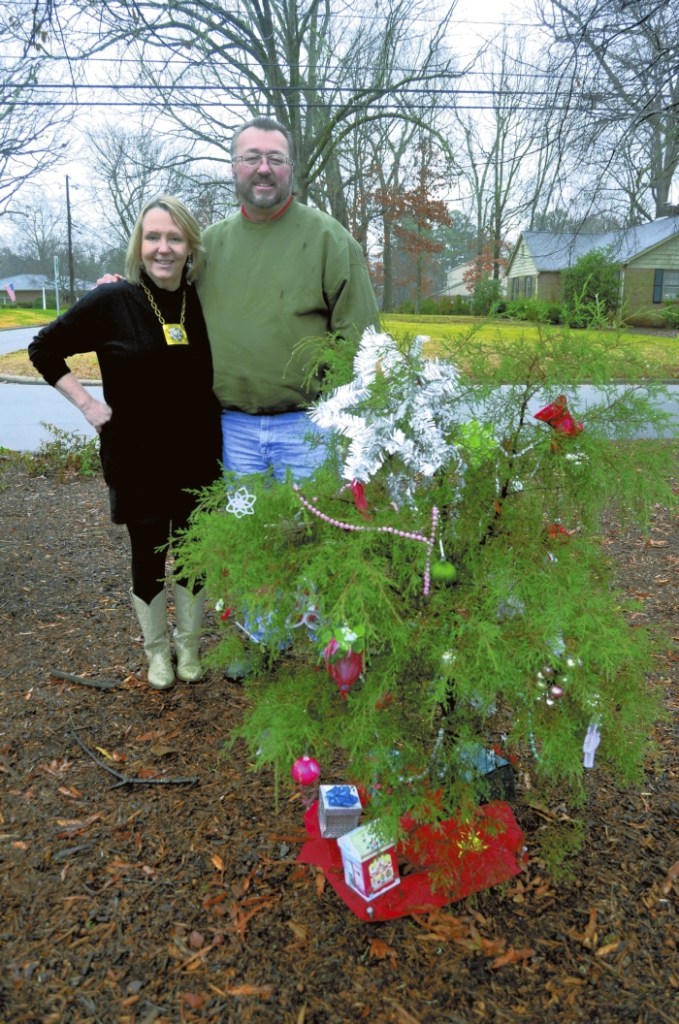 “I love your tree,” passersby shout out to Tom and Cathy Sexton as they make their way through the Eagle Heights subdivision.

The Sextons, who live at the corner of Windsor and Idlewood drives, hear the salutations when they are in their yard at Christmas time. Neighbors and motorists alike marvel at the family’s three-foot cedar tree with its thin foliage and a hodgepodge of Christmas ornaments.

Tom calls it the “Charlie Brown” tree because when it was smaller, the ornaments weighed the tree down. The branches drooped just like the popular comic strip character’s tree in “A Charlie Brown Christmas.”

For four years, the Sextons have continued a decorating tradition that was actually started by strangers.

“In December one day I was driving out (of the driveway) and saw one ornament on the tree,” said Cathy Sexton.

“The next day I saw another,” she said.

Puzzled, Cathy asked her husband if he put the ornaments on the tree. He said he had not.

One day Cathy was working in the garage and looked out the window. She saw two women walking by stop and place an ornament on the tree.

She didn’t disturb them and didn’t recognize them. The women didn’t know it, but they’d started something the family has continued and cherished.

“It’s just a cute, nice idea for someone to do,” Tom said.

The ornaments are mostly handmade, a few out of yarn and now some have been added that “look like they belong at the bottom of the box,” Cathy said with a smile.

There were just a few ornaments on the tree when it was much smaller and then boxes with bows appeared and soon a Christmas tree skirt showed up.

Cathy said her family has added a few of their own ornaments — salvaged ones they thought would withstand the elements and would be fine if they were to break. The Sextons adds a few ornaments to the tree each year, but they always include the first ones that started it all.

The tree has been expected by neighbors and family so much so that one year when Cathy was out of town she made sure to call her husband to decorate the tree in time for the holidays.

On Wednesday a man drove by to tell the couple he liked the tree and even took a picture of it for his class.

The tree wasn’t planted, Tom explains; it just sprouted one day and has grown and filled out a bit over the years.

Cathy’s hope is that the women who unknowingly started this tradition would see it and say, “They are still doing it,” she said.

The tree is one of the first things the Sextons decorate for the holidays.

“People expect it. It’s something that has become important to us,” Cathy said.

“It gets us in the holiday mood,” Tom said.