Prep football: Wyrick had a year for the books 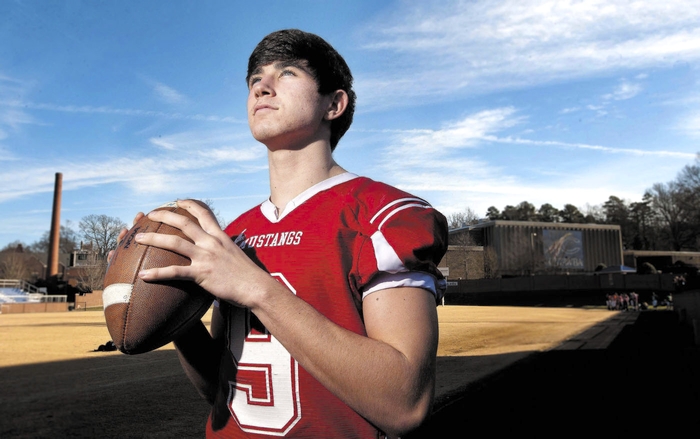 With a new coach and a high-octane offense, Sam Wyrick threw up big numbers on a seemingly weekly basis. Wyrick, the Mustangs’ quarterback, was the director of the most-prolific offense in Rowan County this season.

The Mustangs scored 50 or more points more times (4) than they were held to less than 20 points (3). The Mustangs outscored their opponents by 26 points despite ending the season 7-7 with a loss in the third round of the playoffs.

The season was better than many thought the Mustangs were capable of having, Wyrick included, under first-year head coach Kenneth McClamrock.

“Going into the season, I didn’t expect that much,” said Wyrick, the Post’s all-county offensive player of the year. “I didn’t really know what to expect with the new coach and the new offense, but overall, looking back at the season, it was a season to remember. I hate that it’s gone, but I’m glad I enjoyed it and had the time of my life. It’s great. I wouldn’t trade it for the world.”

Wyrick’s career numbers are 6,443 yards passing and 7,498 yards in total offense. He is responsible for 96 total touchdowns — 74 passing and 22 rushing.

The incredible statistical year was a product of personal maturation and progress made in a new offensive system.

“I saw an incredible leader,” McClamrock said. “I saw a kid who made incredible strides as a player and as a young man. To go from a position where there had maybe not been as much expected of him to, at the end of the year, he had four or five options on every single play.

“Pre-snap, he had multiple quick passing game options. If he didn’t like those, he had multiple run game options. We’d call one play, and he had four or five different plays he could run off of that. In the South Point game, the West Henderson game, and the Freedom game especially, he responded to that challenge and did exceptionally well.”

The play that is most remembered does not go into the statistical log. It doesn’t count for yardage or a completion. It counts where it matters most, on the scoreboard.

In the first round of the 3A state playoffs at No. 2 Morganton Freedom, Wyrick found Shiheem Saunders for a 4-yard touchdown pass late in the fourth quarter to cut the Mustangs’ deficit to 49-48. Then Wyrick and his twin brother Seth Wyrick connected for the two-point conversion pass that lifted the Mustangs to a 50-49 victory. Wyrick said he was nervous before the two-point attempt that determined the Mustangs’ future.

It was a pressure-packed moment in a game East Rowan went into without the weight of the world on its 15th-seeded shoulders.

“We had no pressure going into that game because no one honestly thought we would win,” Wyrick said. “But the coaching staff believed it. Players believed it. And that’s all you need, honestly.”

Wyrick passed for five touchdowns that night and ran for two more. It was a night good enough to garner the N.C. High School Athletic Association’s Performance of the Week award.

East Rowan’s run through the postseason ended in the third round at No. 6 Belmont South Point. In that game, the senior threw for a season-high 376 yards and completed 34 of his 53 attempts. He passed for two scores and ran for another. The Mustangs lost 42-32.

It was the end of an up-and-down season. For every high like the thrilling win at Freedom or the beatdown of West Rowan in Mount Ulla, there were also games that got away from the Mustangs. East Rowan was blown out by Carson, had a letdown against Ledford, and ended the regular season with a loss at home to South Rowan.

“Of course there’s going to be losses you don’t think you should take, but I think we learned from those losses,” Wyrick said. “It built us better character as a team and made us work harder. That’s what helped us during the playoffs to get that big run going.”

Now, the focus is on college. Wyrick said he does not know where he will go to school, but it is possible he and his twin brother take the show to the next level.

“He’s my favorite person to play with,” Wyrick said. “If we go to college together, that’d be great. If not, I enjoyed every single minute I had to play with him.”