Prep Football: McClamrock at the helm of East’s run 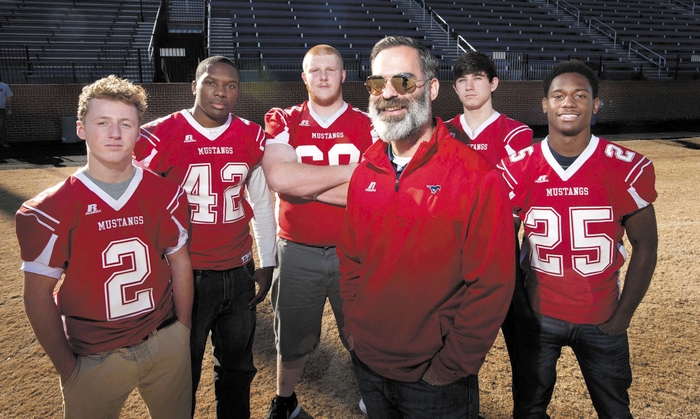 Hundreds of teams have played football in Rowan County, but East Rowan’s 2014 squad is the first to finish 7-7. It’s a rare team that’s bad enough to lose seven times — yet good enough to play for 14 weeks.

In the final analysis, East Rowan was a good team that scored more points (466) than any team in school history and played its best in the state playoffs. That stout showing in the postseason is the main reason first-year head coach Kenneth McClamrock is the Post’s choice for Rowan County Coach of the Year. McClamrock successfully weathered the bad times to get to the good times.

“Adversity is what we talked about on the first day,” McClamrock said. “East Rowan didn’t handle adversity well last season. The kids lost (star running back) Calvin Edwards, and they weren’t able to overcome that. This time they handled it when things went wrong. They showed a lot of character.”

In the preseason, the Mustangs were a consensus pick to finish eighth in the nine-team South Piedmont Conference. They wound up as the last team standing in the playoffs, not only in Rowan County, but in the SPC.

“With new coaches and learning new systems for offense and defense, the season we had was a testament to the work of the kids and staff,” McClamrock said.

Injuries piled up early. When the Mustangs took on explosive Cox Mill in Week 3, they were missing six starters. East Rowan found a way to win 46-43.

Next came a three-game losing streak, including a 48-21 shellacking at Carson in which East Rowan quarterback Samuel Wyrick was banged up early in the contest.

“That was real adversity, but we came back from that disappointment at Carson to play well against Concord,” McClamrock said. “That was a loss in the standings, but it probably was a win for us.”

East Rowan started to put things together offensively Oct. 3 in a 49-35 loss to Hickory Ridge. Still, the Mustangs were 2-4 after that game.

The next two weeks, East Rowan scored 50-plus points in victories over Northwest Cabarrus and West Rowan. McClamrock was the only one in the world who wasn’t surprised by a 59-14 rout of West Rowan in Mount Ulla. McClamrock said his team played the way he expected it to play.

The roller coaster kept operating. There was a hard-fought loss to Ledford, followed by a lightning-delayed, must-win road victory at Central Cabarrus, followed by a stunning Senior Night setback against eighth-place South Rowan. The Mustangs were 5-6 after that defeat.

The South Rowan loss made the Mustangs a No. 15 seed for the 3A playoffs and meant a trip to face undefeated No. 2 Morganton Freedom. Freedom hadn’t given up more than 19 points in a game.  That’s where the season was supposed to end. Instead, it’s where the Mustangs reached deep for their finest hours.

East Rowan’s 50-49 win at Freedom on a Samuel Wyrick-to-Seth Wyrick two-point conversion pass will go down as one of the great victories in school history. The 27-21 second-round win at West Henderson wasn’t far behind when it came to drama.

“We beat an undefeated No. 2 seed and then we made a 3 1/2-hour trip to win another road game,” McClamrock said. “In the playoffs, the key for us was the offensive line. They had the most to learn this year, the toughest adjustments to make. I’m not saying they’d figured everything out, but they were getting closer late in the year. No one came close to getting a sack against us in those two games.”

The Mustangs may have played their best offensive game in a 42-32 third-round loss at No. 6 Belmont South Point that ended the season.

“We had an unbelievable effort in that game,” McClamrock said. “Weeks 12, 13 and 14 were our three best games.”

His chief competition came from last season’s winner Joe Nixon. North Rowan slipped slightly from 13-1 to 10-3, but Nixon led the Cavaliers to their second straight Central Carolina Conference championship. Salisbury’s Ryan Crowder also did quite a job. His team improved from 2-9 to 6-7 and was second in the CCC.

Prep football: Wyrick had a year for the books