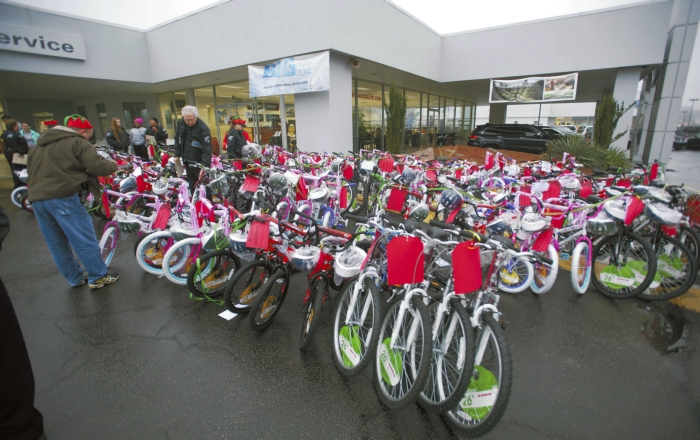 Chasity Morgan has had a tough couple of years that included the death of her father in early 2013 from a motorcycle wreck and the task of moving several times.

Morgan said she takes care of her husband, who is disabled, and because of that the family has moved quite a bit and just got settled. Christmas just wasn’t something she thought she and her husband would be able to provide for their three daughters — Hailey, 13; Mya, 9; and Skye, 6.

She said it’s been rough because she doesn’t have family locally who could help if needed.

The family received the bicycles from two of the youngest volunteers — twins Morgan and Emma Efird, 5, the daughters of Lt. Andy Efird.

The girls, who wore matching elf hats with bells on the ends, were excited to give bicycles on Tuesday, they said.

“We are giving presents to other people who are not getting much for Christmas,” Morgan said.

This is the 13th year for the giveaway, which is a partnership between Gerry Wood Auto Group and the Salisbury Police Department. The car dealership handles the bicycle purchases and the police department screens families to determine their eligibility.

The police department organizes the distribution with civilian and many more law enforcement volunteers.

“Gerry Wood has allowed us an opportunity to deliver bicycles and teddy bears where children very well may have nothing else or very little,” said Police Chief Rory Collins.

He added this is a great chance for children to see police in a positive light. There were 32 volunteers who included police officers, police cadets, chaplains, school resource officers and the children and spouses of law enforcement.

It’s the first day of Christmas vacation, said Police Capt. Shelia Lingle and several of the children have volunteered to give gifts to others.

Leslie Aguirre, 9, and her siblings Adamary, 8, and Jonathan, 12, have been waiting all morning to ride their bikes, an excited Leslie said.

“Thank you, God bless you,” Jonathan spoke up to the police officers.

Their mother, Deydi Aguirre, said when she filled out the application she never thought her children would receive the bikes, but she was thankful.

“It’s absolutely what we are trying to do,” Wood said.

She said she’s appreciative to the officers for what they do.

“The kids were so happy to get bikes,” Leonard said.

He spoke to one family where the mother had cancer and wasn’t able to get the children bicycles.

Dennis said she volunteered because she loves helping people.

“It’s great working with the police department. It’s an honor to be apart of the cadets. It’s great for the community,” Brown said.