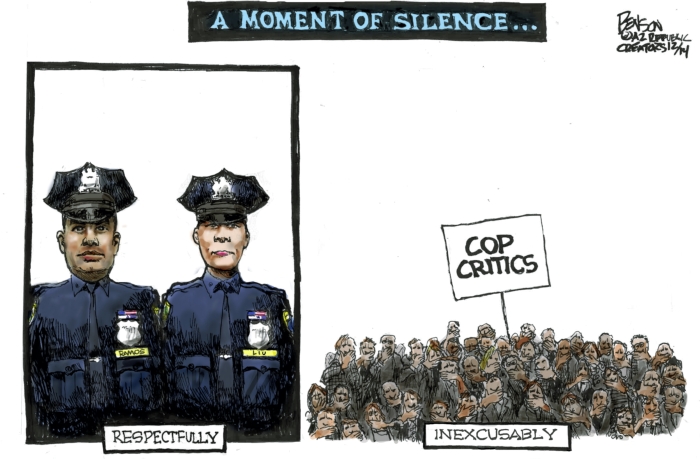 If you say something loudly enough, with just the right amount of conviction, the odds are that people will begin to listen. They might not agree with you, but they’ll listen, and then move on.

Sometimes, though, there will be people who listen too closely and then, out of a skewed sense of reality or priority or simply as a convenient excuse for their own twisted motives, turn your passion and conviction into a criminal act.

You will say that legitimate protest and advocacy, when peaceful, should never be blamed for the antisocial aberrations of others, but that is naive.

Because although some protests are peaceful, as with those old women who pray rosaries in front of abortion clinics, they always contain the seeds of possible violence if the wrong people take the wrong message. Pro-choice advocates like to conflate quiet religious activists with the people who shot Dr. George Tiller in Kansas in 1993 and 2009, and they even blamed Bill O’Reilly for the abortion doctor’s death because he once referred to the man as “Tiller the killer.”

I thought then that this was a foolish and fabricated accusation, and I’m not prepared to make the same mistake that the abortion-rights advocates made back then.

But I’d be blind if I didn’t acknowledge just how much anti-police rhetoric in these past few weeks has contributed to a climate of anger, fear and blame. The constant and growing drumbeat of “hands up, don’t shoot” or “I can’t breathe,” the preachings of a demagogue like Al Sharpton (who never saw a race card he didn’t want to play) and the unsophisticated attempts to link the Garner and Brown cases under the same umbrella of police corruption has made it inevitable that someone would take the message that cops are evil and therefore expendable.

So it was not surprising that after days of constant attack in the streets, in the world of punditry and most despicably from the mouths of government officials including New York Mayor Bill De Blasio, two police officers would become the sacrificial lambs to the race-baiting rhetoric of a self-interested constituency.

When Officers Rafael Ramos and Wenjian Liu were shot execution-style by a man who announced on social media his intention to “put wings on pigs,” it was a direct and sadly inevitable result of the dangerous, powerful animus unleashed against police across the nation. The so-called peaceful marches against police brutality were always peppered with invitations to violence, and there was a discernible undercurrent of anti-police hatred in attacks on the legitimacy of the Brown and Garner grand juries.

It was laughable, if not entirely unexpected, how the industrial grievance complex would immediately try to distance itself from any responsibility in this matter. The life had barely seeped out of the bodies of the officers when social media exploded with apologists for the protesters. On my own page, virtual “friends” wrote of how the shooter was just a crazy man who had shot his girlfriend earlier in the day and was just exploiting the Brown/Garner dynamic to get attention. Others mentioned that he was apparently a Muslim and that this might have some relevance.

Both suggestions miss the mark. This was not a jihad, unless you consider it a jihad against the police. And the fact that the man had murdered his girlfriend, while tragic, doesn’t provide any cover for his hatred of the men he blamed, in turn, for murdering his African-American brothers.

The bitter irony here is that neither of the assassinated police officers was white. This has been pointed to by supporters of the protests as proof that the shooter was not motivated by race hatred. But the officers were targeted more for their uniforms than for their skin, and this is in large part attributable to the screeching, virulent voices raised against those uniforms and badges.

Protests are valuable. Selma mattered, the candlelight vigils to “take back the night” mattered, the 17-year-old Pakistani Nobel Prize laureate Malala Yousafzai matters. But rhetoric that blames a class of people for the annihilation of black youth, and does it so indiscriminately that attacks on people are interchangeable with criticism of legal machinery is dangerous.

No protester held the gun that killed Officers Ramos and Liu. No one cried “fire” in a theater. But some of those protesters created the clear and present danger that this could happen.

Christine M. Flowers is a lawyer and columnist for the Philadelphia Daily News. Readers may send her email at cflowers1961@gmail.com.