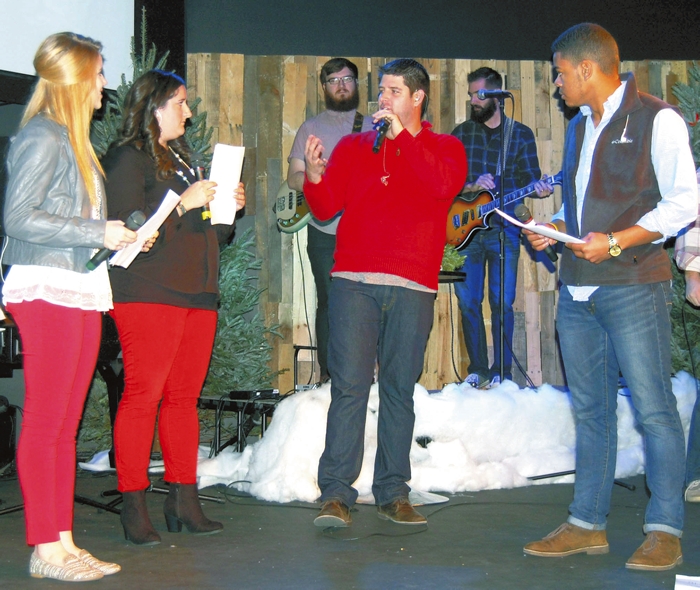 For many, Christmas Eve church services are a staple of their Christmas tradition.

“I’m a huge fan of these kinds of services because they’re an open door for those who don’t normally come to church,” said John Kale, music pastor of Life Church in Salisbury.

“Not only is it a uniquely special and beautiful night, it’s a way to welcome those who might not ordinarily do church,” Conforti said.

Life Church, formerly the west campus of High Rock Church, planned for a “vintage Christmas feel” that deviated from the traditional carols and candles.

“People come in expecting a certain thing at Christmas,” Kale said. “We wanted to do something different so people might connect with the Christmas story in a new way.”

The program had a heavy emphasis on production elements, such as video, lighting and performance. It leaned heavily on music and included a sermon.

“No body has anything to do on Christmas Eve-eve,” Kale said, adding that the church didn’t want to compete with family time and other Christmas Eve activities.

Kale said he expected between 700 and 850 people to show up.

First United Methodist Church, however, will cater toward a more traditional crowd with its three services tonight – a paper bag pageant for children at 4 p.m. and candlelight services at 7 p.m. and 11 p.m.

The paper bag pageant allows children to participate in an interactive church service. They dress up and act out the Christmas story as it’s read from the Bible.

Both of the later services will include scripture readings, communion, a brief sermon and lots of carols.

The 11 p.m. service follows a 30-minute organ performance, and will include the church’s full choir.

Conforti said the traditional flavor “does a beautiful job of embracing the tradition of the church,” adding that it “stabilizes us amidst the frenzied Christmas.”

“We stick with that because it reflects the heartbeat of this congregation,” he said.

Although service styles differ from church to church, months of preparation go into each Christmas Eve service.

First United Methodist’s church leadership has been planning their Christmas Eve service since August, shortly after Conforti was hired.

“The choir has rehearsed for a couple months leading up to Christmas Eve,” he said.

The church was decorated the week after Christmas, and volunteers are secured to be ushers and to serve communion.

Several months ago, volunteers prepared the candles for the service as well.

“That’s a way for church members to serve in a special way,” he said.

Conforti himself begins his sermon preparations several months out.

Kale said Life Church’s staff has been working on their Christmas Eve service since September.

Early in November, they began shooting and editing video and designing graphics for the event.

A production crew, full band, kid performers and Rev. Chris Shelton were involved in the service itself, while volunteers also manned the nursery and coffee café.

Those involved in the performance held several rehearsals over last weekend and into this week.

Kale and his team also put up a brand new set this week as well.

“We turned the set around yesterday and today,” he added. “We wanted to make the stage fit,” he said.

“There’s something about a sense of nostalgia that really captivates peoples hearts,” Conforti said. “People are at different places in their lives, but they have special memories of Christmas.”

There’s something about Christmas that ignites the imagination and gives them hope during the difficult times, he added.

“There’s this longing for light in the midst of darkness,” he said.

He went on to say that a Christmas Eve service is the perfect place for the church to share that light and hope through the truth of the gospel message.

“We’ve inherited that gift and we long to share that gift with each other and to the next generation as well,” he said.

“A lot of us have messed up views about what Christmas is all about,” Kale said. “We may have heard it a 100 times, but there are still things we’ve missed.”

“The coming of Christ – that’s what we celebrate,” he said.