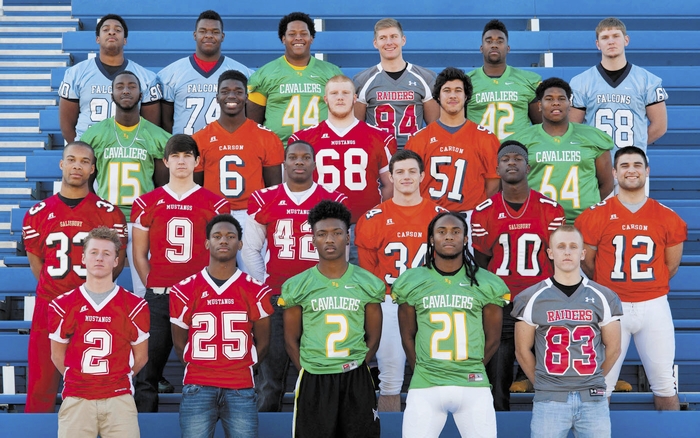 WR: North Rowan senior Sakil Harrison (6-2, 185) had 34 catches for 564 yards and seven touchdowns and was an outstanding blocker.

OL: North Rowan senior Malik McGee (6-2, 270) changed side of the ball after an all-county year on defense in 2014 and led the Cavaliers in pancake blocks.

OL: East Rowan senior Daniel Jones (6-1, 300) was the guy the Mustangs ran behind on fourth-and-1 and allowed few sacks for a pass-happy team.

OL: Carson senior Chris Martin (6-2, 220) was the steadiest guy on a unit that opened holes for a county-leading 3,602 rushing yards. He led the team in home run blocks.

Athlete: West Rowan senior Harrison Baucom (6-0, 175) defines all-purpose. He rushed for 1,113 yards and was second in the county in scoring with 127 points. He kicked 37 PATs, two field goals and accounted for 14 touchdowns.

DL: West Rowan senior Derrick Moreland (6-3, 280) was both a pass rusher and a run-stopper and was the Falcons’ most disruptive defensive force.

DL: North Rowan senior Wesley Jefferies (6-5, 270) was tough to move and had 28.5 tackles for loss for the team that had the county’s best defensive stats.

LB: Carson senior Anthony McCurry (5-10, 215) was honored as SPC Defensive Player of the Year after a banner season that included 104 solo tackles, three forced fumbles and 14 tackles for loss.

LB : East Rowan senior Shiheem Saunders (5-11, 195) made season-changing plays, including a big sack in the win against Cox Mill and batting down a fourth-down pass in a playoff win against West Henderson.

Punter: South Rowan junior Marshall Long (6-3, 190) was the SPC’s Kicker of the Year and shared long snapping duties with Lambert.

A new look for all-county football