Wayne Hinshaw: Fruitcake, the gift that keeps on 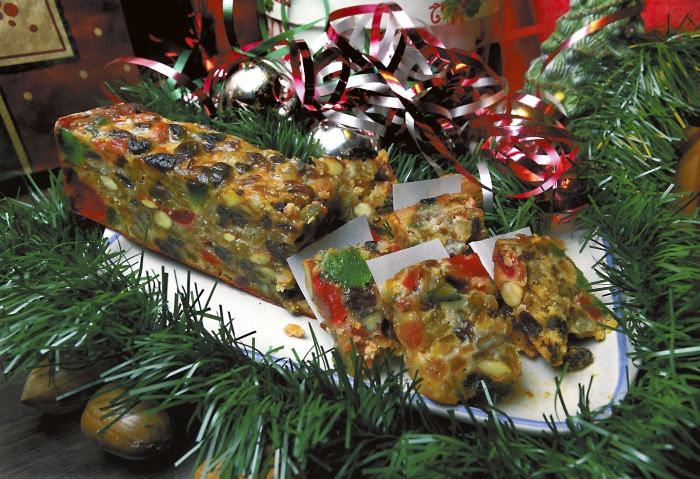 Fruitcake. You love it or hate it, but is an old fashion Christmas tradition to serve it as the Christmas cake. photo by Wayne Hinshaw, for the Salisbury Post

The age-old fruitcake is a much maligned holiday tradition. The late Johnny Carson kept a running series of jokes about the fruitcake on “The Tonight Show.”

I must boldly stand up and say I like fruitcake once a year in small doses. I just purchased a small Claxton Fruit Cake this week to satisfy my annual desire.

My mother used to bake a fruitcake once a year, usually in November. She baked in November so the cake could age a month for the best flavor at Christmas. The cake was served at Christmas. If I remember correctly, we still had fruitcake in January and maybe February and even March.  It was one of those pesky things that would not go away, like a gnat flying around your face.  I shouldn’t say go away. I meant to say not eaten away.

She would line the kitchen counter with raisins, sweet pineapple, pecans, even sweeter red and green candied cherries, walnuts and almonds, lemon and orange peels and put it in a pound cake mix and bake.  Hey, I have described the recipe for the modern day Claxton Fruit Cake that I purchased.

After the cake was baked to a brown color, it was always wrapped in a white cheese cloth and placed in a cake tin for aging. She would set the tin in a room that was not heated, so it would stay cool.  It picked up flavor with age.  Some folks would put rum or other alcoholic beverages in their cakes, but not my mother, so she said.  She made the cake the same way her mother taught her to make it.

Let’s look into the background of  this strange cake made of candied fruit, dried nuts and spices more closely.  Folklore says that early Egyptians would place fruit cakes on the tombs of loved ones for food in the afterlife. Research shows that the first known cakes were baked in ancient Rome using pomegranate seeds, pine nuts, and raisins with barley mash. Roman soldiers carried fruit cake  with them, since it would last a long time. During the Middle Ages, honey, spices and preserved fruits were added.

This is “as nutty as a fruitcake.” Guess where that saying came from?

The recipes varied from country to country, but the concoction spread all over Europe.  An even stranger occurrence was the banning, by the Catholic Church, of using butter in the cake. The cakes were said to be “sinfully rich.” Pope Innocent VIII finally issued the “Butter Letter” of 1490 allowing butter and milk to be used in German fruitcakes. Now, he must have been a fruitcake lover.

In America, bakers discovered that all the heavy concentrations of sugar and candied fruit would act as a preserving agent. They learned that by adding rum or brandy, the  alcohol would prevent the cake from molding. If you didn’t put liquor in your cake, you could still soak the cheese cloth and wipe the cake.

Back to my family eating the cake for three months, a bite at a time. The cake was preserved and would last and last. In 2003 on the “The Tonight Show,” Jay Leno ate a piece of fruitcake that was baked in 1878. Brother, that is a 125-year-old piece of cake.

You now have a recount of the “story of the fruitcake” as a Christmas tradition.

I remember the mince meat Christmas pies. Mother made me one of those, full of pork meat, spices and fruit. I best stop. That is another story for another day.