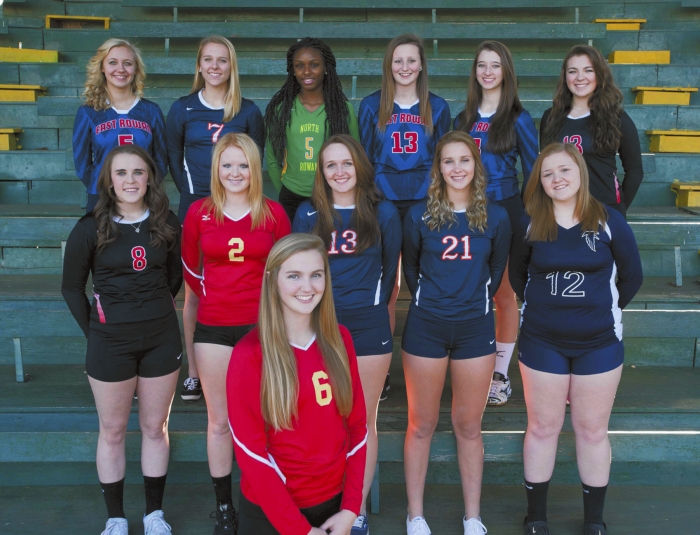 Salisbury sophomore Juliana Anderson was thrilled to learn she was the Salisbury Post’s Volleyball Player of the Year, but that was only the second-best thing that happened  to her last week.

“I got my braces off,” Anderson said with a grin. “My dad (dentist Jimmie Anderson) took them off — but it’s still a big deal.”

Those braces are a reminder of  how young Anderson is, but she was the county’s dominant player as a 15-year-old. The 5-foot-10 Anderson combines good spring with great timing and a consistently lethal  arm swing. She could attack from the net or the back row and blasted 394 kills. She averaged 15 kills per match.

“She was our finisher, our go-to player,” Salisbury coach Mallory Hodge said. “She would kill the ball and finish the point when no one else could.”

As strong as Anderson was, players of  the year never come from bad teams. Salisbury (15-11) hadn’t made volleyball headlines in two decades, but this time the Hornets did. They won the Central Carolina Conference and  the CCC tournament. They even won in the first round of the 2A state playoffs.

“It was the craziest and best season ever,” said Anderson, the CCC Player of the Year. “I wouldn’t trade the season we had for anything. It was a great group of girls with no drama. I know what a cliche it sounds like, but we were a family.”

It was a family with one heck of a middle hitter. Anderson had 35 kills in Salisbury’s two CCC  tournament games.  In the five-set playoff win against R-S Central, Anderson racked up 21 kills, eight digs, five aces and four blocks.

“We only had two seniors (Mary Seifert and Maddie Gentry). so it was important that Juliana assume a leadership role along with the seniors,” Hodge said. “She was a voice on the court. She played like an upperclassman, not a sophomore, and she grew so much.”

Anderson was a varsity player as a freshman, and a pretty good one, but her improvement in a single year was startling. She played on Team North Carolina the summer between her freshman and sophomore seasons. That contributed to a growth spurt in skill level as well as assertiveness.

“I felt like when I was up at the net, I had a lot more control of the game than I did as a freshman,” Anderson said. “It also helped that it was my second year with my teammates.  I was comfortable and confident.”

Anderson makes all A’s and performs well as a goalkeeper for the Hornets’ soccer team. She’s playing club volleyball this winter for an elite 18-under team.  Hodge has no doubt she’ll be even more of a force in the middle as a junior.

Anderson is well aware Division I middle hitters usually range from 6-2 to 6-6, but, as the saying goes, if your dreams don’t scare you, they’re not big enough.

“I was born at UNC and I love UNC,” she said. “Tar Heel born and bred. That would be perfect to go to UNC and play volleyball.”

“We’re great friends,” Anderson said. “It’s like I have a teammate who plays for another team.”

Anderson was joined on the all-county team by Seifert, Salisbury’s dynamic setter. McCall and springy outside hitters Brittany Small and Ashton Rogers represent East Rowan on the 12-person team. Carson’s  talented all-county trio of Morgan Hester, Elena Turnbull and Jordan Osborne all will return in 2015. South Rowan’s Kylie Labbe and Caroline Hubbard, West Rowan’s Ashley Wood and North Rowan’s Aliyah Farmer round out the team. North Rowan’s Makala Lytton, CCC Player of the Year in 2013, suffered a knee injury early this season but could be a powerful force again in 2015.

Boys basketball: With a chance to secure top seed,…