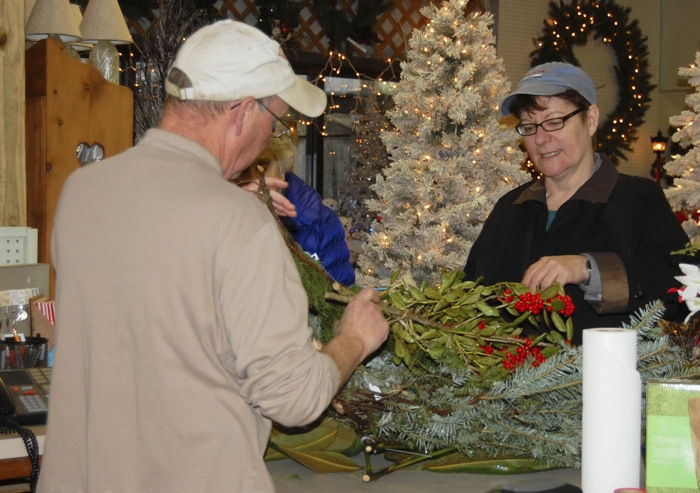 With Christmas a mere two days away, Christmas tree sales are dwindling and tree lots are shutting down, but that doesn’t mean this year has been bad for sales.

North Carolina is the second largest producer of Christmas trees in the United States, typically bringing in $75 to $80 million each year.

According to Bill Glenn, marketing specialist with the North Carolina Department of Agriculture, however, this year’s profits are expected to be even higher than normal.

“Sales have been excellent,” Glenn said.

John Hutton, store manager of Godley’s Garden Center and Nursery, said their live and artificial tree sales have been strong this year.

“I think the live trees have sold better,” he said, comparing sales to the past few years. “We have very few left.”

Hutton said that the store saw “pretty brisk sales” right around Thanksgiving, which peaked the week after when people “start decorating in earnest.” After a slight lull, sales have “picked back up” over the past week.

The trees, wreathes and garland sold at Godley’s are purchased from tree farms in West Jefferson.

“They’re on the lot the day they come down the mountain,” he said.

According to Hutton, people are look for the right size, shape, freshness and price tree. The most popular height is typically between seven and seven and a half feet.

Daphne Foreman made her “annual Godley’s pilgrimage” Monday afternoon. Although she’s relocated to New York, she comes back each year when she visits for the holidays.

“My folks always got their Christmas tree here,” she said.

Rather than buying a tree, however, Foreman purchased greenery – holly, magnolia and evergreen branches – to create grave sprays for her mother, grandmother and grandfather’s gravestones.

Each year, she creates her own arrangements out of fresh greenery she selects.

“You never know what you’re going to get,” Foreman said, as she looked through her selections.

Michael Blowers, who sells Christmas trees for River Ridge Tree Farm near the YMCA on Jake Alexander Boulevard, said he’s sold roughly 600 Christmas trees each year for the past three years, and this year, he’s on track to do the same.

“I’m down to about 40 trees,” he said, adding that he’s been selling roughly 100 trees each week.

The trees are grown in Ashe, Allegany and Catawba counties.

Blowers said he opened the week before Thanksgiving and plans to stay open through Christmas Eve, even as many tree lots are shutting down.

“We’ve got some Christmas trees that need a new home,” he said.

Because he still has trees left, Blowers said he’s been able provide some trees for people who couldn’t afford them on his own.

“It blesses me and my Christmas,” he said, adding that any unsold trees will be thrown into High Rock Lake to create fish habitats.

Blowers said lots of time and dedication go into growing Christmas trees. A tree must grow 10 years before it reaches eight feet in height, and 14 years before it grows to 12 feet. Every year, they’re sprayed to ward of diseases and insects and are sheared and shaped.

This year, the weather has been great for Christmas tree farmers, Glenn said.

The trees had adequate rainfall during the growing season. Summer temperatures stayed lower than normal, and the mountains cooled early during the fall.

“They need that cold weather in the fall,” Glenn said, adding that it helps the trees retain their needles.

The weather has continued to cooperate since the trees were harvested, as well.

“We’ve had fairly good weather for the trees,” Hutton said.

Cold and even wet days like Monday help the trees hold up better and keeps them fresher, he said.

Most Christmas trees grown in North Carolina are Frasier Firs, which grow best in the highest elevations of the Appalachian Mountains. Cypresses and white pines are also popular, especially at lower elevations and in the “choose and cut” market.

“We’ve got a pretty unique product in the Fraser fir,” Glenn said, adding that they retain a “wonderful shape” and aroma.

“The branches are just right for holding even big ornaments,” he said.

Three-quarters of North Carolina’s trees are sold out of state, and they are sold as far away as Canada, the Caribbean and South America.