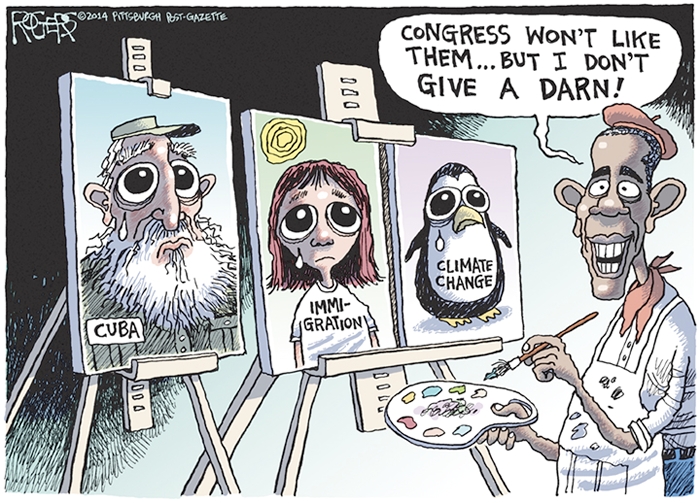 Is it possible to hold two seemingly contradictory thoughts about the president’s decision to partially end the half-century embargo against Cuba? Can one agree with conservative critics, from Sen. Marco Rubio (R-Fla.), to Rush Limbaugh about how the Castro brothers are, apparently, getting everything they want and how the U.S. gets nothing but promises from a repressive regime that lies — and still back the president’s decision?

President Obama’s foreign policy has been one of retreat and coddling of tyrants with no positive results for the U.S. But perhaps without realizing it, his decision to remove some of the restrictions on travel to Cuba for some Americans, to allow the purchase of some Cuban products and open the possibility that American businesses might soon return to the island may be the diplomatic equivalent of the joint U.S.-Israeli project that slowed Iran’s progress toward manufacturing a nuclear weapon.

Light overcomes darkness and the darkness that is communism is best dispelled by the light of capitalism. Yes, the return of some American money to Cuba might temporarily prop up the Castro regime, but it will also have the beneficial effect of not allowing Fidel and his brother Raul to continue blaming Cuba’s bad economy solely on the U.S. embargo. When the Cuban people are exposed to the possibility of a better life in their own country, they are likely to increase their demands for freedoms they have been denied for more than five decades.

When President Kennedy announced an embargo on all trade with Cuba on Feb. 3, 1962, he cited as his rationale the close ties the communist country had with the Soviet Union. Since the Soviet Union’s collapse and the economic problems now faced by Russia, and with socialist Venezuela no longer able to act as an economic sugar daddy to Cuba, due to falling oil prices, that rationale no longer exists.

Rather than attempting to block the partial lifting of the embargo, the new Republican Congress should require reciprocity from the Cuban government before lifting additional restrictions. Among other things, President Raul Castro has promised to open access to the Internet for the Cuban people. Making sure he follows through ought to be a top U.S. priority. There is no faster way to spread freedom than to expose Cuba to the outside world and allow accurate information to trump communist propaganda.

Another condition ought to be the repatriation of black radical Joanne Chesimard. In 1973, she was convicted of murdering a New Jersey state trooper. She broke out of prison in 1979 with the aid of accomplices from the Black Liberation Army and the leftist Weather Underground. Chesimard fled to Cuba. She’s been there ever since. An estimated 70 fugitives are hiding from American justice in Cuba. Repatriating them would enhance good relations between the two governments.

With those provisions and the realization that communists usually lie to the West, I’m with the president’s decision on this one. As he said, the policy of the last 50 years isn’t working. He, or Republicans, might apply that same logic to domestic programs that aren’t working.

If the partial lifting of America’s embargo against Cuba leads to the eventual collapse of the communist government and the return of freedom, Cuba libre (a mixture of Cuban rum and American Coca Cola) might just be the drink and toast of choice of the Cuban people in a liberated Havana.

Cal Thomas writes for Tribune Media. Contact him at tcaeditors@tribune.com.

The emotional side to preservation