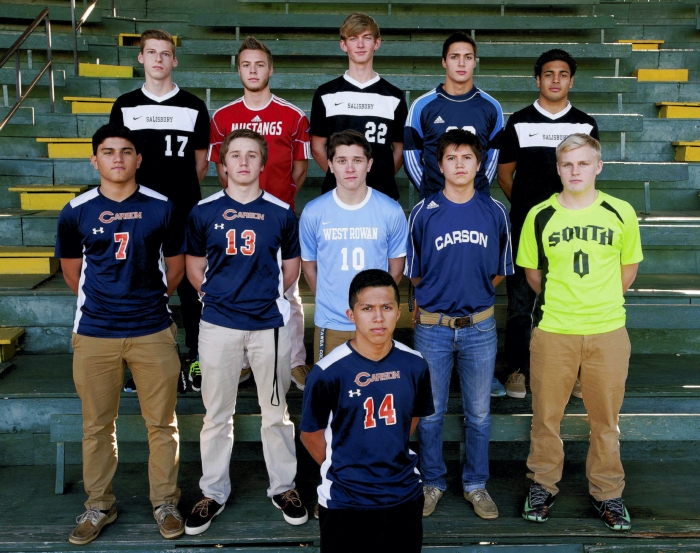 SALISBURY — Not many opponents did not know the name of the prolific scorer in Carson’s No. 14 jersey. Brandon Flores scored more than 40 goals as a sophomore in 2013. Coming into his junior season, the Cougars’ forward, more often than not, was a marked man.

In that instance, why not try to make a friend?

“There would be times with teams I would talk,” Flores said. “I was trying to get him (to lose focus). It would work sometimes, but sometimes it wouldn’t.”

It didn’t matter much. It was another great year for the main weapon in Carson’s offensive attack.

Flores, the Post’s all-county boys soccer player of the year, led Rowan County players with 42 goals, and he contributed 18 assists. He was the South Piedmont Conference’s player of the year and shared 3A Region 7 player of the year honors from the N.C. Soccer Coaches Association. For the second year in a row, he was named to the coaches 3A All-State squad.

“I just had a good season. We started off good,” he said. “It wasn’t just me. Without my team, I could not have done what I did throughout out the whole year.”

The Cougars opened the season with a 2-1 win at Marvin Ridge, the defending N.C. High School Athletic Association 3A state champions. They beat Lake Norman, a 4A soccer power that made it to the third round of the state playoffs, in the third game of the season before getting into conference play.Carson lost once and tied one more on its way to another South Piedmont Conference championship.

In the first round of the 3A State playoffs against Gastonia Ashbrook, the Green Wave played with five men on the backline and had two players mark Flores. The forward broke through for a goal in a 2-1 win.

“At first it would work, after a while I just found a way to get loose, and I managed to get a goal and it pushed us through to the second round,” Flores said.

The year ended, however, in the second round of the state playoffs with a 2-1 loss to Marvin Ridge, the team the Cougars defeated in the season opener. Facing the Mavericks for the second time in the season proved tougher than the first. Marvin Ridge knew who to mark and who to target.

“They just knew what we were going to do, so they shut us down and didn’t give us those options anymore,” Flores said.

Post All-County: Marchinko a step, or two, or three,…