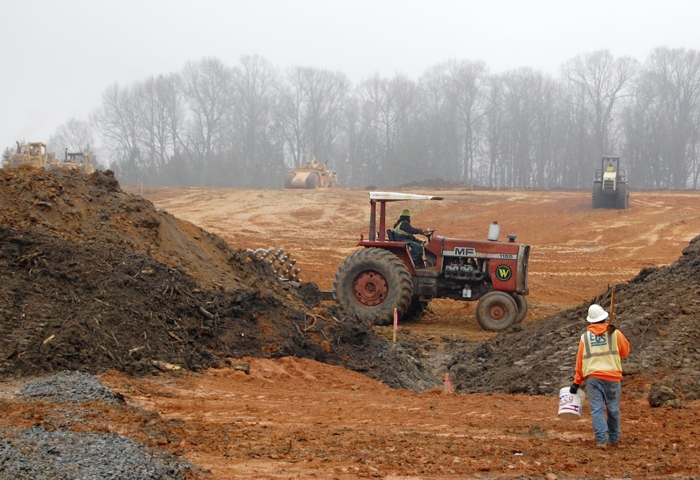 Work at the 32-acre site in the Summit Corporate Center, off Julian Road, where Agility Fuel Systems is set to locate has been ongoing since before the company made its announcement. The land, owned by the Keith Corporation, has been cleared.

Economic development officials on Monday announced the second major development in as many months at a site just off of Interstate 85.

Work on a retail complex at the Summit Corporate Center on Julian Road is already ongoing, but Agility Fuel Systems will add to development at the site after an announcement that the alternative-fuel system company will locate its regional headquarters in Rowan County. News releases from both Gov. Pat McCrory and Rowan Works Economic Development announced the company’s intention to build a more than 200,000- square-foot facility on a 32-acre plot of land in the center.

The releases cited the company’s total investment at $7.5 million. Initial hiring estimates are 149 jobs in the first three years, with future growth expected to exceed 250 jobs. A majority of the workers would be classified as “assemblers.” The average annual salary is expected to be $37,761, and the average annual salary for Rowan County is $36,902, according to the news releases.

The site, which crews have been clearing in recent weeks, where Agility will locate is owned by Charlotte-based real-estate developer the Keith Corporation.

At the Summit Center, Agility will join a retail complex that’s scheduled to include a Dicks Sporting Goods and Hobby Lobby. Initial construction work is already under way at the retail complex site.

“I think as the holidays approach, it’s a really positive note as we wind down 2014,” said Rowan Works Economic Development Director Robert Van Geons Monday, following the Agility announcement. “It shows what we can do when we all pull together for Rowan County.”

Agility Fuel Systems is headquartered in Santa Ana., Calif., and makes natural gas systems for heavy trucks and buses. Agility has been in business for 18 years. It has more than 25,000 trucks on the road, logging 1.5 billion miles per year. The company’s Rowan County facility will serve as a regional headquarters for the East Coast.

In a news release, Greg Edds, chairman of the county’s board of commissioners, expressed gratitude for Agility choosing Rowan County.

“With their help, we were able to show this great company that Rowan County was the right place for them,” Edds said. “The economic future of our citizens and our community is the number one priority for me and each of the County Commissioners. We are excited to welcome Agility Fuel Systems and want to personally thank them for investing in Rowan County.”

With the announcement, Edds said economic conditions may be changing in Rowan County, making it more attractive for development. He said retailers often choose a location based on demographics.

“Our question and our task as private and government officials is to set the conditions that would create enough job growth and disposable income so that we get on the retailers map,” he said.

Agility’s CEO called the company’s future plans a “win-win” situation for the state, Rowan County and his company.

“We are really pleased to announce that our new world-class production facility will be located in Salisbury, North Carolina, where we will be able to access a well-qualified workforce and be strategically located to serve our customers,” said Agility’s President and CEO Barry Engle.

“Agility Fuel Systems is a great addition to North Carolina’s growing transportation-related industry,” said. “Agility will be in a great position to serve the Eastern United States by having its regional headquarters and production facility here in North Carolina.”