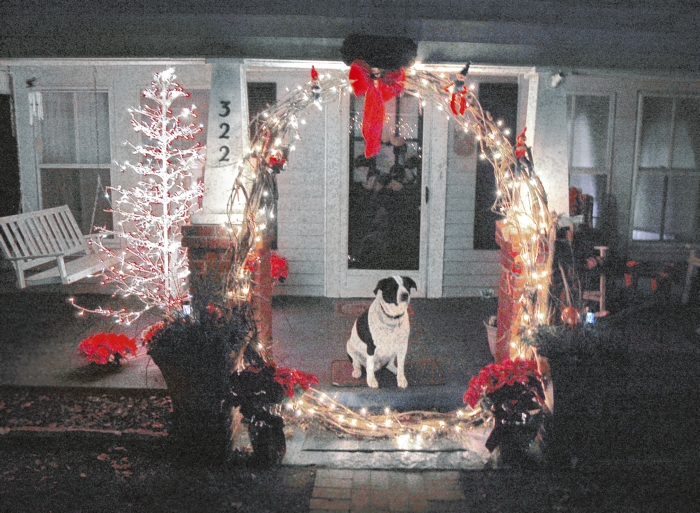 Gary and Joyce Gulledge's dog, Cowboy, a 4-year-old Canadian Pointer, is framed by the 8-foot wreath on the porch at their home in Granite Quarry. The wreath was made by Tina Hicks.

GRANITE QUARRY — There’s a lot of interesting items inside the cozy home of Gary and Joyce Gulledge.

Gary has been around the world more than once through his work as a missionary and his time in the Navy. He’s collected all kinds of things on his journeys and also at garage sales.

The home has miniature cannons, a German prayer bell, a ram’s-horn trumpet called a shofar and much more. And each item has a story to go with it.

But what Joyce didn’t have, and has always wanted, was a giant wreath that people could walk through when they came to the Gulledge’s front door during the holidays.

A couple of weeks ago, Joyce mentioned the huge wreath to her former daughter-in-law, Tina Hicks, after Hicks asked her what’s the one thing she’s always wanted.

Hicks went to the woods behind her home on Long Ferry Road, gathered up some grape vines, soaked them in water for flexibility and used twine to tie them together. She added lights to the wreath, and Joyce and Gary placed little, stuffed elfs on it along with a red ribbon.

It took less than a day to make the wreath, Hicks said. She had her boys put it in the back of the truck and take it to the Gulledges.

Now, there it hangs at their porch step. It’s so big you don’t have to duck your head when you go through. And it makes for a fancy passageway when it’s lit up at night.

Their niece, Penny Curtis, thought it was so beautiful she insisted on telling the newspaper about it, Joyce said.

“Everyone who sees it likes it,” Gary said.

Hicks is very smart and creative, Joyce said, and she’ll do anything for the Gulledges. Hicks decorated their Christmas tree, which rotates on its stand, too.

Why all the kindness? It’s simple, really.

Love is a big deal in the Gulledge home, where once you visit for the first time you’re always welcome, Joyce said.

She and Gary have been married for almost 25 years and have lived in the house on Rowan Street for 15 years.

They said they love the holidays. And each year they get a new ornament for their Christmas tree. It has doves, lambs, a crown and Joyce’s favorite item: a nail that represents the crucification of Jesus.

You can’t have Christmas without Christ, she said.

And now, with her huge wreath on the porch, Joyce can sit back and enjoy the holiday season.

“Christmas is such a special time of year,” Joyce said.

Kannapolis middle schoolers give back to other students in…