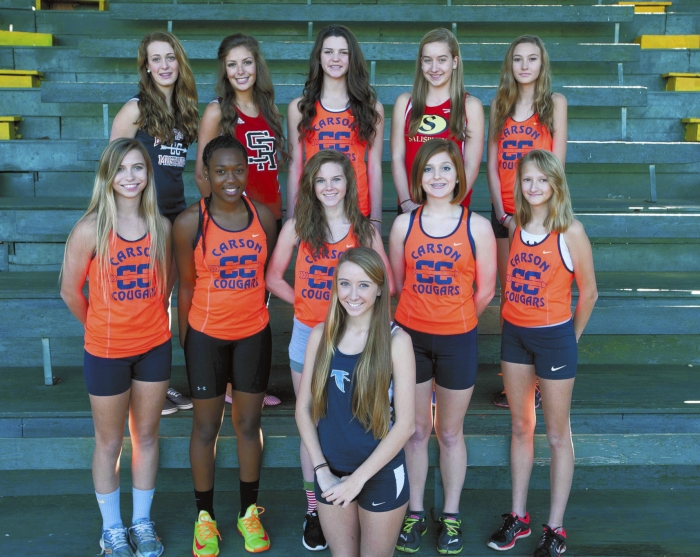 Heglar  was successful because of a combination of work ethic, stamina and speed.  She combines the endurance  found in all good cross country runners with unusual wheels for a distance girl. She competes in outdoor track in the 4×400 and x800 relays and in the 800 meters. She placed fifth in the 800 in last spring’s South Piedmont Conference Meet and took sixth in the regional, so she has quite a kick at the end of grueling cross country meets.

“I really just started doing track,” Heglar said. “But now I like both sports and I hope I can do both in college.”

Heglar got her cross country season off to a stellar start in August by winning the pre-Rowan County Meet at Dan  Nicholas Park. That effort put a target on her back, but she still won by  a margin of 22 seconds at the Rowan County Championships in late September. That marquee race was also  held at Dan Nicholas. Heglar pulled in front at the midpoint of the race and was timed in 21:07.

“I learned a lot this year about pacing myself better,” Heglar said. “I still had the energy I needed to speed up at the end.”

“The biggest thing she taught me was to drop my arms lower when I ran and to always  keep my fingers open,” Heglar said. “That helped me improve my speed.”

Heglar’s fastest race of the year was at the United Way Invitational in Newton in October. She was clocked in 20:59 and placed 12th in a strong field.

Heglar  was second in the Pre-South Piedmont Conference meet and finished 11th in the official  SPC Meet at Salisbury Community Park.

“She’s a hard worker, she’s coachable, and she wants to do better each time,” Marsh said. “Sometimes she’s a little too hard on herself, but in the same breath, that’s why she was first place in the county.”

Heglar’s goal for her senior season is to break 20 minutes. She’s going to have plenty of young competition pushing her.

Six all-county runners are freshmen, and there are no seniors on the team.