Board of Elections receives tech upgrade for next year’s elections 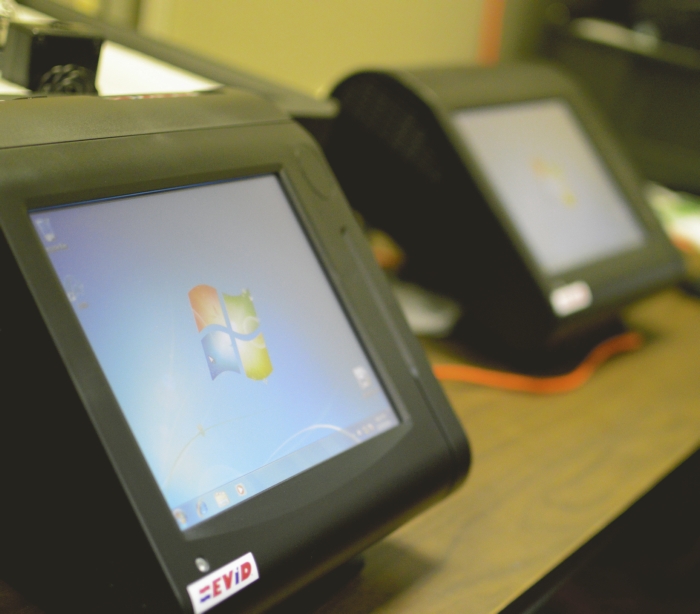 Josh Bergeron / Salisbury Post - Two of the Rowan County Board of Elections' new machines sit inside of the elections office. The machine will be used for the first time during the 2015 municipal elections.

When checking in to vote during the 2015 elections, voters may be standing in front of a poll worker with a computer rather than a book full of names.

The Rowan County Board of Elections on Dec. 15 received 82 new, all-in-one computers that are scheduled to first be used during next year’s elections to check in voters. Two of the computers will be placed at every precinct, according to elections specialist Laura Russell. Previously, only some of the precincts used computers to check-in voters, but Russell said on election day from 2015 onward every precinct is scheduled to use the new machines.

“It’s definitely going to speed up check-ins,” she said. “Instead of a worker having to flip through a book to find your name, they can just type in a few letters and it will pop your name up.”

Data on the new machines will contain names of all the more than 90,000 voters registered in Rowan County, Russell said. So, if a voter travels to the wrong precinct on elections day, the poll worker would immediately know the voter’s correct voting location. Russell said poll workers previously had to call the Board of Elections to find out the correct location, which consumed extra time.

Gerry Smith works for VR Systems and helped set up some of the new machines. Smith said other counties use the same software, but the actual, physical computers are unique to Rowan County.

The board of elections began using the software contained on the computers in 2011, slowly expanding it to 13 precincts. The computers delivered in December are a significant upgrade, Russell said.

“I think it’s going to help push the county forward because everybody is going to have to move to electronic polling at some point,” she said. “For us to be one of the first counties to use it, the new system is exciting.”

Another decrease in time required could come before voting starts. Instead of printing out labels and sheets of paper with names, Russell said she would only have to download data onto a USB drive.

The computers won’t be used for early voting until the State Board of Elections changes the one-stop system, she said.

Kannapolis middle schoolers give back to other students in…