Kannapolis middle schoolers give back to other students in need 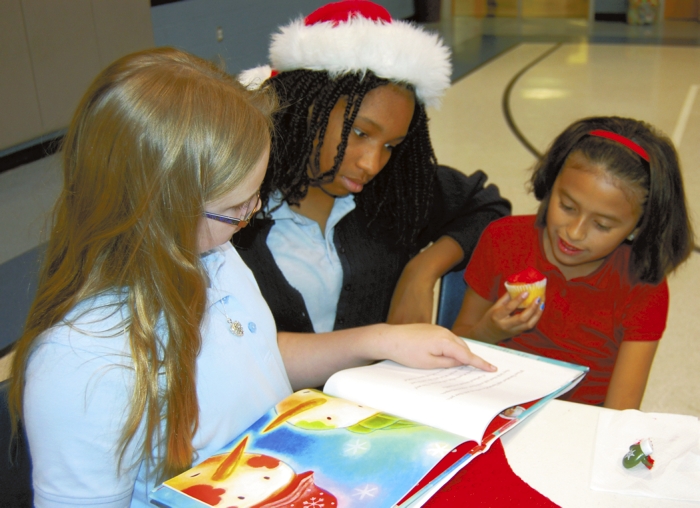 For the past three years, Kannapolis Middle School’s Academically or Intellectually Gifted students have gone to local schools to pamper some of the district’s neediest students.

“They come in knowing their job is to make this the best two hours of the school year,” said Kannapolis Middle School teacher Sarah Newell.

This year, 50 middle school students went to Fred L. Wilson, Jackson Park and Woodrow Wilson elementary schools, where they paired up and adopted one elementary student for two hours of games, crafts and gifts.

These students don’t do it alone, however.

Earlier in December, all of the district’s Academically or Intellectually Gifted students gathered and brought in new toys. Roughly 100 kindergarteners through 12th graders got together and wrapped the presents for the students at these schools.

Each elementary school picked out 25 students to participate in the Christmas party.

At Fred L. Wilson, one student was selected from each class.

School counselor Jessica Patton said the vast majority of the students at Fred L. Wilson receive some sort of help or assistance from churches or organizations during the holiday season. The students she selected for the Christmas party were the ones who weren’t getting any of the extra help but were still in need of it.

“We try to spread our help around,” she said.

They rotated through stations with board games, Christmas books and cupcakes. They also decorated stockings and made snowman s’mores and Christmas cards.

At the end of the party, they opened their gifts — revealing Legos, Barbies, balls, dolls and games — much to the delight of both the givers and the receivers.

She added that the project is a favorite among Kannapolis Middle School students.

While students in that age group are often overlooked for community service projects, it’s a beautiful opportunity for them to learn that “the act of giving is better than receiving,” she said.

“I like hanging out with the kids,” said Kannapolis Middle School student Olivia Hoagland.

“It’s our community,” said Carmen Granillo, adding that she felt the service project was a good way to get involved.

“We need to help everyone we can,” Hoagland said.

Newell added that for many students, the opportunity to give back at the elementary school they attended is especially meaningful.

That’s why, Newell said, the project has “grown every year” they’ve done it.

Not only do the elementary schoolers benefit from receiving gifts — the close interaction with older students gives them role models to look up to.

“I was excited to meet some people who were going to be middle schoolers,” said Fred L. Wilson Elementary School student Destiny Hartsell.

Newell said that Friday morning, one Jackson Park student said she “felt like a princess.”

“That’s why we do this,” Newell said.

A gift for Christmas: Couple have built tradition of…