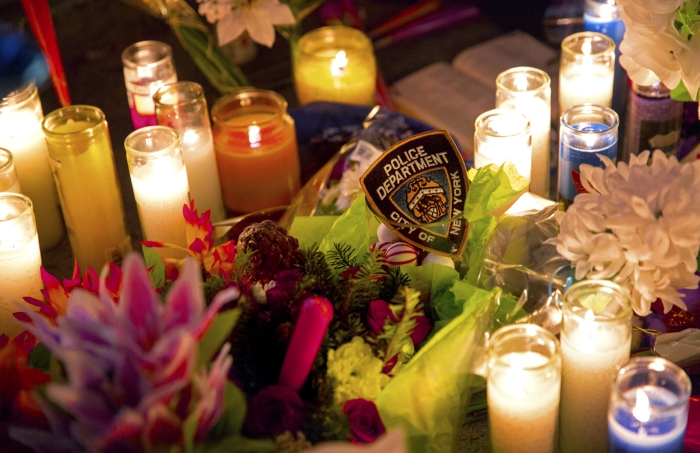 An NYPD arm patch rests with candles and flowers Sunday, Dec. 21, 2014, at a memorial near the spot where two New York Police Department officers, sitting inside a patrol car the previous day, were shot by an armed man, killing them both. The assailant then went into a nearby subway station and committed suicide, police said. (AP Photo/Craig Ruttle)

The rank and file is warned to wear bulletproof vests and avoid making inflammatory posts on social media after the fatal shooting of two NYPD officers.

An Associated Press investigation helps track down two families in Myanmar who didn’t know their loved ones were laid to rest at a cemetery in southern Thailand.

3. WHO THREATENS TO STRIKE U.S.

“Our toughest counteraction will be boldly taken against the White House, the Pentagon and the whole U.S. mainland,” — says North Korea in response to “reckless” rumors over a Sony cyberattack.

Obama’s historic opening goes far beyond the highly regulated “people-to-people” travel and could sharply increase the number of U.S. visitors in the coming years.

A much tougher election map two years from now could force the GOP back into the minority.

6. NEARLY 800 CHILDREN DIE OF ABUSE AS OFFICIALS FAIL TO PROTECT

Many of them were beaten, starved or left alone to drown, while authorities had good reason to know they were in danger, The AP has found.

A court in Fall River will focus on jury issues in the case against Aaron Hernandez.

“In the Grip of the Law” brings convicted terrorists face-to-face with victims in surreal encounters and celebrates the country’s beleaguered security forces.

The waste spills in a gash down the flank of a lush hill above tribal villages in the country’s east, still sickening their residents.

Noor’s ability to transcend the restrictions of her culture speaks to a certain kind of tolerance toward sexual minorities in this North African nation.

Rowan weather: Oh, the weather outside is frightful