This old house — was home 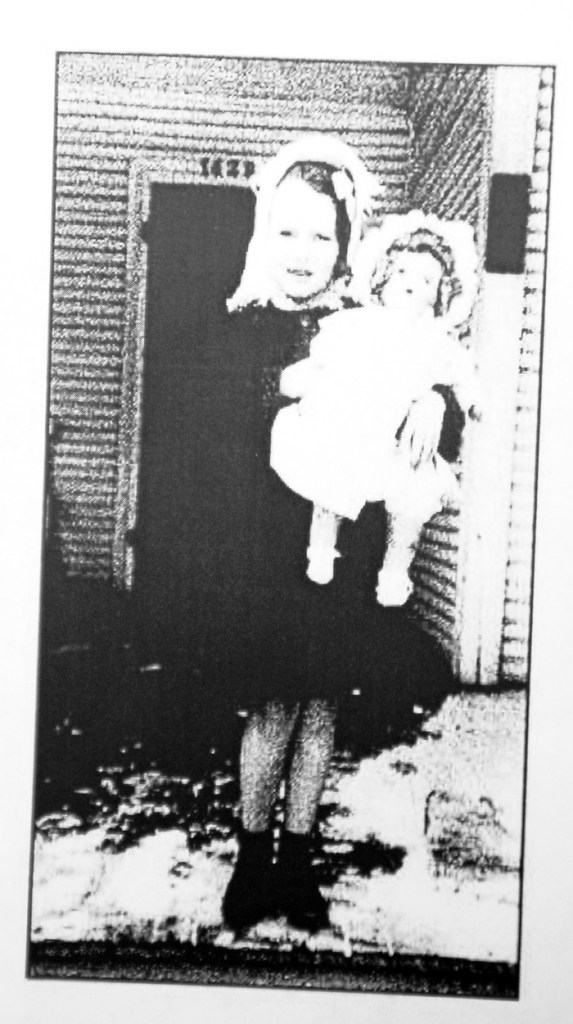 Submitted photo A young Elaine Morris Hillard stands on the porch of her family's home at 1428 N. Main St.

SALISBURY — An impromptu wedding was held once in the front parlor. So was a wake.

Nine different children were born in a middle room downstairs.

On summer evenings, the Morris brothers — Orville, Melvin, Lloyd and Hank — ate watermelon on the front porch or ice cream from the hand-cranked freezer.

The kitchen smelled so good when Floise Morris — “Mama” to her five children — was canning, making biscuits or simmering her chili sauce with all the spices.

Zeb Morris, part of a gospel quartet, often would invite H.O. Clark, Tom Jackson and Floyd Stout into the house for singing practice. Floise, the pianist for North Main Baptist Church for 54 years, would play for them, or she and Charles Borland would practice a song if a funeral were scheduled at the church.

Whenever Elaine, the family’s baby girl, walked upstairs to visit Aunt Sissy, an older brother usually would reach from below and grab her legs.

“No matter how close I got to the wall,” 78-year-old Elaine Morris Hillard says today, “one of them managed to get me.”

Hillard, who lives in the Washington, D.C., area, believes there are friendly spirits of her family still living in the house at 1428 N. Main St. Her father, Zeb, died in 1967; her mother, Floise, in 1972. All the brothers are gone now, too, but she thinks they all would be happy knowing Historic Salisbury Foundation is trying to bring back to life this place the Morris family dearly loved.

“I do feel like my family are there, watching,” Hillard says.

Memories flood back for Hillard every time she thinks about the old house, built in 1898 by her grandparents, Daniel R. and Mittie Myers, who were from the Tyro and Churchland areas of Davidson County.

Daniel Myers came to Salisbury to deliver mail. He first relied on a horse and buggy, and there was a barn in back for the horse. The family story goes that when the post office supplied a Ford for Myers to use, he sold his horse to a man in Spencer.

The horse could not abide the change in owners, and the steed walked back to the house at 1428 N. Main St. When he saw such devotion, Myers told the horse he could live with him for the rest of his days, and he returned the horse’s purchase price to the Spencer man.

Daniel and Mittie Myers had four children who were born in the house, including Floise and her sister, Myra, who everybody called “Sissy.” The time came when Mittie Myers declared that Salisbury was becoming too crowded and, despite Daniel’s protests, the couple built a new home on 101 acres of farmland Mittie owned along Long Ferry Road.

On his way home most afternoons, Daniel Myers would stop by the North Main Street house to see his grandchildren. Once while the front porch roof was getting new shingles, a worker had left a ladder propped up, and 4-year-old Hank climbed to the top and was sitting on the roof unattended when his grandfather walked up.

It was a quick rescue.

Zeb Morris married Floise after serving overseas in World War I. He and “Brownie,” who became Sissy’s husband, bought the house’s first hot-water heater and refrigerator with the bonuses they received for marching in a post-war parade in Washington, D.C. Sissy and Brown stayed in three rooms upstairs.

The four Morris brothers— they ranged from eight to 15 years older than Elaine — slept in two full-sized beds in a back room downstairs. Elaine says her room for many years became a back bedroom upstairs, from where she often listened to pigeons cooing under the eaves.

For awhile, the middle room downstairs where all the children were born was also the place for the boys’ Saturday night baths, because it was the only room with heat.

Elaine says the living room wasn’t heated unless company was coming. She took piano lessons from Lloyd Merriman and would have to practice 30 minutes a day. In the winter, she wore a coat while playing, but she didn’t care because “Mama always told me how pretty I sounded.”

Born in 1936, Elaine contracrted diphtheria before she was a year old, and the house had to be quarantined.Her brothers were sent to Grandma Myers’ house and could not go to school.

Uncle Brownie died when Elaine was 2. While he was lying in state in the front parlor, little Elaine broke off the heads of many of her mother’s tulips and daffodils because she wanted to bring them inside to her dead uncle. Her mother was not pleased.

Elaine learned to roller-skate on the front sidewalk. Her father ran along side until she could balance herself.

Summer evenings were devoted to the front porch, and sometimes the family welcomed the Rawleigh man, showing up with his briefcase food of wares to sell.

Elaine liked to leave the house with her father and take an evening walk down North Main Street.

She also enjoyed catching lightning bugs on their walks, or they would look at the stars and talk about man’s great adventures to come.

Elaine attended nearby Henderson Elementary School. She always walked home for lunch, when she and Floise would listen to Ma Perkins on the radio. On Saturday mornings, the young Elaine also liked to listen to “Let’s Pretend.”

The little girl loved playing around the giant oak tree next to the gravel driveway. The large, above-ground roots became rooms for her pretend playhouse. Sometimes she filled some of the cavities with water to form little swimming pools.

Zeb Morris also built his daughter a real playhouse in the backyard. He rang the bell at North Main Street Baptist most Sunday mornings, and before the church had a heating system, he walked across the street early and made fires in the stoves so things were warm in the sanctuary by the time the service began.

Morris worked most of his career for Southern Railroad at the transfer shed. During World War II, he served as his block’s air warden. Elaine says she was always scared when he left her and Floise at the house and went outside during an air-raid alert.

“I just knew the Germans would get us,” she says.

The Morris children were well-dressed. An accomplished seamstress, Floise Morris made the boys’ shirts and most of Elaine’s dresses. She also made the long dresses for Elaine’s piano recitals and, eventually her wedding dress. She sewed in that same middle room where she gave birth to all of her children.

Floise Morris was a great cook and baker, too. She canned things from the family’s vegetable garden in half-gallon jars, so there was always plenty to eat, even during the Depression. Elaine says hobos would stop by the house and ask for food as payment in exchange for any work they could provide.

With four boys in the family, the grass was perpetually worn out in back, and a patch of it had to be swept instead of mowed.

Once, the boys’ dog “Spot” was run over and killed when chasing an ambulance down North Main.

The front-parlor marriage came one day when a preacher friend of Aunt Sissy’s, the Rev. Britt, had stopped by the house for some courting. Marriage license already in hand, a young couple looking to be married that particular Sunday afternoon heard Britt may be at Sissy’s house.

Britt agreed to marry them on the spot, and Elaine’s mother played some accompanying music on the piano and cooked for the couple later.

“One of my saddest memories of the back porch is the morning I left to join the Marines,” Orville wrote in a letter to Elaine in 1999. “I can see Mama yet, sitting on that old wash bench, sobbing as if her heart would break, not knowing if or when I would return.”

Mondays were wash day at the North Main Street house. After the clothes were squeezed through the ringer, they went up on the clotheslines in back — whites in the sun, colors in the shade.

Sundays were dedicated to church, so all the cooking was done on Saturdays. From the smell, the kids could always tell when Floise Morris had a new oil cloth for the kitchen table. Zeb Morris always said the blessing for each meal. The family ate three sit-down meals a day, and it was never a good idea to be late to the table.

Elaine Hillard married in 1957 and moved north to work more than 50 years in Washington. She still has the upright Steinway piano on which her mother played and she practiced her lesson in the living room. “I love it, it’s really beautiful,” she says.

Hillard is thrilled and overwhelmed Historic Salisbury Foundation has stepped in to rescue the house she will always call home.

“I have a hard time expressing how grateful I am knowing someone will live in it and love it again,” Elaine says. “… We had a good life.”