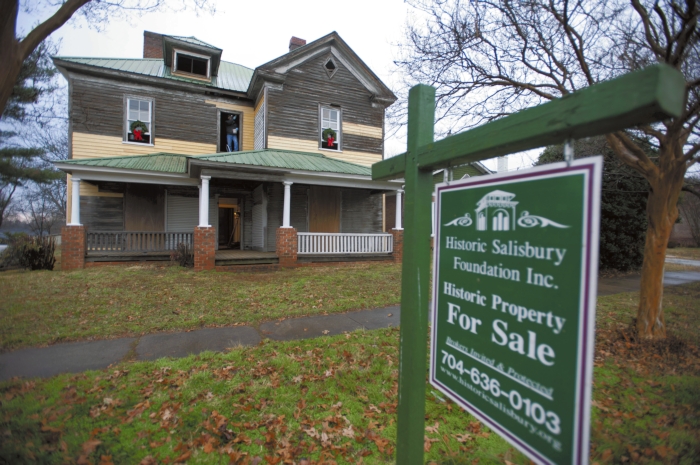 JON C. LAKEY / SALISBURY POST Doug Black works on the window frames on the second floor of the 1428 North Main Street home.The Historic Salisbury Foundation recently acquired two properties on North Main Street in Salisbury. One home, at 1428, has been known for the last decade as the scaffolding house because it has been an on again off again restoration project for the owner. The other property at 1600 North Main Street has several unique features that lend it self to a potentially desirable property. on 12/16/14 at inSalisbury, NC, USA.

SALISBURY — People driving by called it “The Scaffolding House” because of the alway-present framework on the side of the structure just waiting for men and materials to start work.

The restoration at 1428 N. Main St. never happened, though the wooden scaffolding remained in place season after season, year after year.

Owner Al McCanless of Seagrove once had high hopes for the 1898 house. He protected it with a new metal roof and foundation. But that’s about as far as he was able to go. Meanwhile, this two-story house across from North Main Baptist Church fell into deeper disrepair, a constant target of the city’s code compliance department and in desperate need of a rescue.

That save may have come from Historic Salisbury Foundation, which received a donation of the house from McCanless and has set about the work of replacing rotten wood siding, fixing and replacing windows, cleaning things up and stabilizing it to the point where a new owner can come in and create a vital single-family home again.

The scaffolding is gone.

“You don’t know what comfort and peace of mind this brings to me,” says Elaine Morris Hillard, a Maryland resident who was born in the house in 1936. Her grandparents, D.R. and Mittie Myers, were the original owners. (See the accompanying story.)

The foundation is becoming more deeply involved in the North Main Street area than just the Myers-Morris House at 1428 N. Main St. Someone also donated to the foundation the 1912 Hunter-Mowery House, a Victorian cottage at 1600 N. Main St. In addition, the foundation has been in negotiations for an option contract on another property in the 1600 block.

Brian Davis, executive director of Historic Salisbury Foundation, says he drove through the North Main Street area earlier this year, taking note of both its integrity but also some of the distressed and vacant properties, such as the once-dubbed “Scaffolding House.”

“It’s intact,” Davis says of the North Main Street corridor overall. “It really speaks to the whole community between Salisbury and Spencer and reflects the growth of the city in the early 1900s.”

To date, Historic Salisbury Foundation has saved more than 100 historic buildings through an active revolving fund program,. These kinds of programs have made an impact on communities nationwide.

At a recent National Trust for Historic Preservation gathering, which Davis attended, the 1772 Foundation and Savannah College of Art and Design presented a video on the work of revolving funds.

A survey of 20 revolving funds in the country, including Historic Salisbury Foundation’s, showed they had saved 2,500 properties, representing 5 million square feet with a $500 million value.

Those sites house 6,000 people and represent some $3 million in property taxes.

Historic Salisbury Foundation and other preservation entities generally use their revolving funds as instruments of last resort. A distressed property is acquired, stabilized and sold with protective covenants to a buyer who completes the renovations to meet his needs and tastes.

You can see how it has worked — on a grand scale — with the Fulton-Mock-Blackmer House at 112 S. Fulton St.

Also over the past year or so, Historic Salisbury Foundation has bought and sold three distressed homes in the Chestnut Hill area and has a fourth one on the market. It also has stabilized and put up for sale the historic Low House on Bringle Ferry Road, close to the old Power Curbers plant.

Revolving funds have been used to save single houses or whole communities. In Alamance County, the Glenco Mill Village of 32 houses is often used as an example of how a revolving fund can help take properties with minimal value and develop a neighborhood with a multi-million value.

Charleston , S.C., was the first to use the revolving fund principle in the 1950s, followed by Savannah, Ga.

Davis says the foundation uses its revolving fund to stabilize properties that would not otherwise ever sell on the open real estate market unless that work was done first. It’s also a great way for the foundation to work with the city in identifying properties that could be saved from demolition, Davis said.

Sue McHugh, a longtime activist for the North Main Street neighborhood, calls houses such as the one at 1428 N. Main St. “loose gems.” She acknowledges it’s a positive spin for properties in sometimes desperate need of having to be saved first, followed up by lots of tender loving care and devotion.

McHugh said she and others in the North Main Street area welcome the foundation’s efforts.

“We are ecstatic,” she said. “Already the improvements are like night and day.”

An owner of a 1905 North Main Street house herself, McHugh says her neighborhood is like a museum of houses whose history is tied in closely to the streetcar. It still gives one a glimpse into early suburban Salisbury, and it’s the last remaining residential corridor into Salisbury, having escaped the commercial growth that overtook and replaced, for example,  houses on East and West Innes streets.

McHugh also touts her neighborhood as being within walking distance of the downtown, City Park and Hurley Park.

McHugh describesNorth Main Street as safe and a place for sitting out on the front porches. In addition, the homes are architecturally gorgeous, historic, affordable, “and a lot of them don’t need a ton of work,” McHugh says.

There have been some frustrations. The North Main Street Association has applied for the city’s annual BlockWorks projects, but has yet to be awarded one of the workdays.

With the city’s help, the association also is trying to make more improvements at the intersection of North Main and 11th streets. Some progress has been made, but the association would like to do more.

In 2006, residents gave their input over several months on a North Main Street Small Area Improvement Plan, which won unanimous approval from Salisbury City Council in 2007.

“Little to nothing has been done toward that plan,” McHugh says, adding she attended a council meeting last week and urged the council members to revisit the work at their retreat early in the new year.

The plan included, for example, several traffic-calming measures hat would enhance the residential nature the neighborhood already has, McHugh says.

She also believes housing codes could be improved with stronger language to stop a trend citywide of “demolition by neglect.”

McHugh is a former president of the North Main Street Association, which started out in the 1980s as the Old North Salisbury Association. She oversees the association’s website and Facebook page.

The association regularly schedules meetings and clean-up days. The North Main Street area generally extends north and south from the Spencer city limits to the railroad tracks. It also takes in the east-to-west area from Jackson Street to the railroad tracks. McHugh says her association covers an area that overall includes about 40 blocks and 440 houses. She said the split between rental and owner-occupied properties is about 50-50.

The neighborhood has the city’s oldest house — the circa 1785 John Steele House.

The North Main Street Historic District has been on the National Register of Historic Places since 1984. After the West Square Historic District, it also became the city’s second locally designated district in 1993, meaning exterior changes to properties in that district have to be approved by the Salisbury Historic Preservation Commission.

The stabilization work now going on at the Myers-Morris House is being done mostly by volunteers, including Doug Black, chairman of the foundation’s board of trustees. Davis and Black say the goal is to make the house airtight and safe, and they predict it will be on the market by the spring or summer of next year.

The selling price is usually determined by the amount of money the foundation has invested in a revolving fund property.

“It will be very affordable,” Davis says.

Black is working almost every morning in a front upstairs bedroom of the Myers-Morris House. He brings in the windows one by one — the four-bedroom house has 26 windows needing attention. About 10 of the windows will be completely new.

With the windows that can be saved, Black is repairing, gluing, sanding, cleaning, oiling, painting and reglazing. There is sometime a strong smell of epoxy in the air.

Black says he will be able to save about a third of the original glass in the windows.

Some of the repair sashes have come from the foundation’s salvage warehouse on East Horah Street. The progress is slow. Black is able to work on about one window a day.

At least a half dozen other volunteers hve worked on the house, including Don Conner, Gene Krueger, Carl Peters, Mac Blankenship, Mack Alexander and Terry Wilber. “We’ll teach you,” Black says, inviting other volunteers who might want to help. “It’s a great classroom.

The Hunter-Mowery House at 1600 N. Main St. will need some repairs, but it is in better shape overall than the Myers-Morris House. The cottage, which has a pebble-ash exterior and gingerbread millwork on the front porch, belonged to the same family for 73 years. It offers 1,742 square feet and a 437-square-foot garage.

The 1915-16 city directory showed Leslie Hunter and his wife, Margie, as the residents. Hunter was an engineer at the Southern Rail Yard.