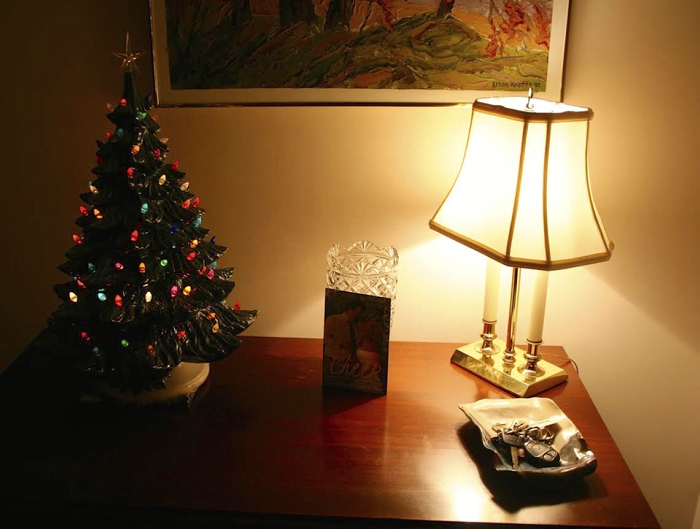 PHOTO BY SUSAN SHINN The finished ceramic tree at home on my foyer table.

Every year at Christmastime, my husband and I went to visit his grandparents. Nanny and Daye would make a fuss over our new baby, as great-grandparents are wont to do. And I would admire Nanny’s ceramic Christmas tree, which sat on top of their console television.

“Well, you can have it one day, honey,” she’d always tell me.

Of course, once my husband and I divorced, I figured the chances of getting that Christmas tree were pretty bleak for an ex-granddaughter-in-law. One day, I vowed, I’d have my own ceramic Christmas tree.

Years went by, and every year at Christmastime, I’d think about that tree. And then I’d think “D’oh!” because by that point I wouldn’t have enough time to make one before Christmas rolled around yet again.

But this year, by golly, this year was going to be different.

Which is how I found myself at Janet’s Ceramics in Lexington the morning of Dec. 9. In the 1970s and 1980s, ceramics were all the rage — which is why so many people’s grandmothers had these little ceramic Christmas trees.

There really is a Janet — and her name is Janet Myers. And now her daughter, Leigh Dunning, is carrying on the tradition of making ceramics of all kinds.

“I’m hoping to turn this into a good, viable business again,” says Leigh, who’s building up the store’s clientele. In the new year, she’s planning to offer paint-your-own pottery classes for children’s groups and women’s groups.

“We’ve never actually counted how many molds we have,” Leigh says, but guesses it’s somewhere over 5,000.

So anything you can imagine, you can pretty much make in ceramics classes: the Christmas trees, Mr. and Mrs. Santa Claus, angels, lighthouses, trays, bowls … the list goes on and on.

But this morning, I had come to make a tree.

Leigh set me up at a small, round table. I’d selected the next-to-the-largest tree (22 inches from base to star) and it had four components — the top of the tree, two additional “branches,” and then the base. The top three pieces would be fired together into one unit. But first I had to paint it.

Or rather, apply three coats of glaze.

Leigh gave me some brushes and a sponge and a Cool-Whip bowl of water. First, I’d have to wipe down the pieces, then I would glaze them. Actually, before that, I was supposed to “clean” the greenware, which involved sanding and cutting off the “seam” where the mold came together. I said no thanks to that, and paid extra to have Leigh do it.

I found out later I could’ve had Leigh glaze it for me, too, but then she reminded me I wouldn’t have had the “experience” of taking a ceramics class.

The class meets around 9:30 every Tuesday morning. I use the word “around” intentionally. Of course, I was so excited that I was early, and for at least a half-hour, I was the only one there. One by one, the other ladies came in. There are about a dozen or so classmates when everyone comes.

People come, she says, for the nostalgia, for the hands-on experience. “People always want to create.”

Now it’s my turn. Leigh puts some muscle into shaking a bottle of glaze, marked “Evergreen Fir.” More than once while I’m painting, I ask her, “Leigh, are you SURE about this color?” Of course she is, but at the moment, it looks nearly black to me.

She gives me some good advice when I get started.

“You want to load your whole brush with glaze,” she says. “You don’t want it sopping and dripping, but you want it fully loaded.”

While I’m painting, I meet Nancy Spence, a retired teachers’ assistant at North Rowan High School who lives in Mocksville. This morning, she is refurbishing a tree that belonged to her neighbor’s ex-husband’s grandmother.

“When he moved out, he left all this stuff,” she says, applying a fresh coat of snow to the branches. “He was too sorry to climb up in the attic and get it out.”

After she finishes with the tree, Nancy says, it’ll be hers.

She works diligently on the snow.

“You put it on like frosting,” Janet says. “What you see is what you get. Let it glob some. Be casual.”

Meantime, I’m walking all around the table, painting my pieces. Someone mentions that one of the ladies in the class has a lazy Susan, but she’s out sick. I wish I still had mine. It had geese on it. I paint on.

By 11, Leigh has put on a pot of coffee, and Cathy Martin has brought cookies. They’re good. She’s working on a set of five angels to give as a Christmas gift. She’s painting tiny dots of red glaze that will turn gold after they’re fired. Looks like too much detail work for me.

As Christmas music plays on the radio, the conversation flits from one topic to another. Nancy talks about a delicious-sounding recipe for cranberry salad, and promises me she’ll bring it next week. (She does.) The ladies discuss the merits of Burl Ives’ voice, and talk about local Christmas programs. My tree has now taken on a shade of lovely dark gray as I apply the second coat to everything. It’s not as much fun as the first coat, but I soldier on.

Jeanie Collins came in this summer with her Aunt Bertha, then started coming to class on her own in September. She works with special needs clients.

“I enjoy it,” she says of ceramics. “I think it’s relaxing.”

Kay Kepley has been working with Janet since the business owner had ceramics classes in her basement.

“I’ve been here ever since,” Kay says.

The class is supposed to end at noon, but sometimes stretches ’til 12:30, Leigh notes. The ladies often go out to lunch together. I’ve got my two coats complete, so I head back to Salisbury. I go back the next day to put on the third coat. It’s quiet — and not nearly as much fun without the other ladies there.

On Tuesday, I return to pick up my tree, which Janet has fired for me.

Now I can pick out the lights for it. They resemble tiny colored-plastic bulbs. I ask Leigh if I should pick out extra in case any burn out.

She says, “Uh…” before I realize what I just said. A bulb inside the tree lights up the bulbs. Oh yeah, duh.

Anyway, I go about picking out the lights. There are lots of different colors, and each one has to go in the exact right spot. Red, blue, green, white, yellow, orange, dark blue. Then I find some purple ones and decide I have to have them too, and switch out some of what I already have. Leigh tells me I can get some special glue to affix them permanently once I get home. But then later I find out from my cousin Sharon that her mom, my Aunt Frances, has several sets of bulbs. That makes me think I should maybe hold off on the glue for now.

Finally, the tree is done, and we turn on the light.

It looks so pretty.

Carefully, we pack up the tree in a box with some of Cathy’s bubble wrap, and carefully, I drive home.

I set the tree on the foyer table, turn it on, and call my mother to come and see. She is surprised how good it looks, I can tell.

I text a picture to Andrew’s other grandfather — Nanny’s son — who lives in Florida.

“It’s beautiful, and Nanny is smiling down from heaven,” he writes back. “May you enjoy it for many, many birthdays of our Christ.”