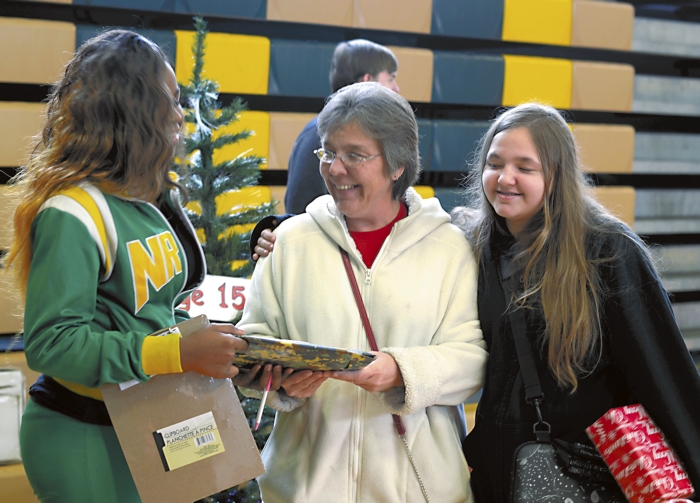 SPENCER — Sharing is one of the joys of the Christmas season, but try as you might, that can be difficult when times are tight.

Tammy Walton and her daughter Kelley, 13, said as much, talking over lunch Saturday.

“I mean, we usually like to help other people out at this time of year,” Tammy said.

But these days, even people who like to help others need some help of their own, she said.

Enter Greg Lentz, whose Hearts with Hands ministry usually responds in the wake of natural disasters.

Saturday, Hearts with Hands partnered with North Rowan High students and teachers to host Cavaliers Care, a first-of-its-kind event held in conjunction with student organizations at the school.

Lentz, who lives in the area, said he wanted to give back to North Rowan families hit hard by the struggling economy.

With help from about 100 volunteers – North Rowan High School students and teachers, plus community volunteers – about 400 kids and parents were able to enjoy a free hot dog lunch and games.

And each child left with a wrapped Christmas gift, and each family received a package of food.

Lentz’s ministry coordinated gathering the gifts, with help from donors in the community.

As he spoke, the North Rowan High School gym echoed with the sounds of kids playing – shooting baskets, taking part in a relay race and competing at a bean-bag toss.

“It’s something we’ve always wanted to do, to be able to give back to the community,” Mitchell said. “We teach these young people the importance of giving back and doing good in the community.”

“It’s a good experience, especially this time of year, to be able to give back to people less fortunate,” said Corbin Smith, who plays football and baseball at North Rowan.

The smiles on kids’ faces as they came in to pick up their presents were a reward for those who volunteered.

East Spencer Mayor Barbara Mallett, who spent the morning volunteering at Cavaliers Care, said the help for families in the North Rowan area was a blessing at this time of year.

“It takes all of us to make a difference,” Mallett said. “And, if we can each do one thing to uplift others, then we will accomplish what we were put on this Earth to do.”

Mallett praised volunteers who worked with parents to make sure they were reaching those who needed assistance.

And Mallett was especially grateful to the students and parents who gave up hours to prepare and host the event.

“When you start young giving back, it continues throughout your life,” Mallett said.

Betty Pruitt and her daughter, A’shala, were among the parents and kids who said the Cavaliers Care event was a blessing.

A’shala’s godmother, Nellie Pullian, was also there. “It’s a godly thing they’re doing,” Pullian said. “It’s good that the community is reaching out to help people.”

Kina Michel, 13, said she planned to share her gift with her brother, who wasn’t able to be there due to being sick.

Kina, a student at North Rowan Middle, said she looks forward to one day being able to help others at the holidays – especially helping kids who are homeless.

“I love how family gets together at Christmas,” Kinda said. “It’s not about what you get for Christmas, it’s about the people who’re there.”

Lentz, meanwhile, said he’d like to provide more outreach opportunities in the North Rowan area, and hopes the community will continue to support those efforts.

More information on the charity, including a link to donate, is available online at heartswithhands.org.