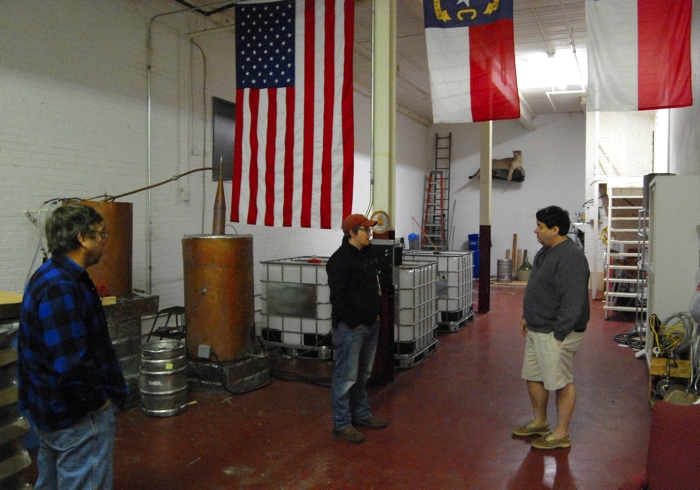 Southern Grace Distilleries is located in the former Warren Clay Coleman mill in Concord. Perry Morris, center, is the distiller and Thomas Thacker, right, is the operations manager. On the left is Larry Morris, Perry's father, who passed the family's moonshine tradition on to his son.

Thomas Thacker, Leanne Powell and Perry Morris opened Southern Grace Distilleries Inc. in October. They have an office downtown and the distillery is located in an old textile mill.

The distillery will start with three products: A 130-proof (65 percent alcohol) corn whiskey marketed as moonshine called “Sun Dog 130,” an aged variation of the moonshine that will be an oak whiskey, and a fruit-infused product.

Thacker and Powell are lifelong friends, and they met Morris while working for former Democratic Congressman Larry Kissell, who served North Carolina’s 8th District before losing re-election in 2012 to Republican Richard Hudson.

Powell was Kissell’s chief of staff and Thacker, who before had worked in the restaurant and newspaper businesses, was deputy chief of staff. Morris worked on the campaign team.

“After redistricting and the 2012 election, we all knew we needed something else to do for a living,” Thacker, who is from Wadesboro, said.

Thacker and Powell had an interest in distilling, and said the more they talked about it the more it made sense to give it a try.

“We sort of weighed our options and looked at some things to get into, and we just kept coming back to that this was a good idea for a lot of reasons,” Thacker said.

But to start a distillery, they needed a distiller. And that’s where Morris comes in.

Morris, originally from Austin, Texas, said his family has a long history of making moonshine. He knows how the distilling process works and, most importantly, can run a still. Southern Grace Distilleries is located in space the company leases in the former Warren Clay Coleman mill off Main Street.

Walking through the huge, brick building, with its high ceilings and wood floors, gives one a sense of the area’s history.

A plaque on the wall reads, “On this site, in 1896, the first black owned and operated textile factory opened, — This building was the dream of a former slave who became one of the wealthiest men in the south.”

Powell said the reason the mill was chosen to house the distillery is to reflect a time when manufacturing was at the core of America — when Americans made most of the products they used.

That’s what Southern Grace wants to do: sell a great product that’s made in America, she said.

Powell grew up in Concord, and, before starting Southern Grace, had spent most of her career in politics. She worked in the White House during the Clinton administration. She also worked for former state Rep. Lorene Coates.

She said her political career gave her an up-close look at the disintegration of manufacturing in America. She’s always had an interest in manufacturing, and said putting the distillery in the former mill made sense.

Plus, being in the mill gives them plenty of room to expand.

Southern Grace’s downtown office is the former law office of her father-in-law.

Powell’s political career has also helped her to navigate all the red tape that comes with starting a distillery. There are few things on the planet more highly regulated than a distillery,  she said.

A license is required to be a distiller, and a brokerage license is needed to sell the product. Product labels have to be approved at the federal level and by each state the product is sold in.

Then there’s the federal taxes, which must be paid before the product goes to market. The tax is based on how much alcohol is in the product, a higher proof means a higher tax.

North Carolina has an Alcoholic Beverage Control Commission that handles the distribution of alcohol within the state. The state holds the product in a bonded warehouse until a county’s ABC board purchases it. The state tax is paid by the customer at the point of sale at an ABC store.

Right now, Southern Grace is waiting for final approval from the state, and “Sun Dog 130” should be on store shelves early next year.

The distillery is in a side room attached to what was the main floor of the Coleman factory.

Fittingly, an American flag hangs next to North Carolina and Texas state flags.

The still looks like a homemade water heater. And that’s pretty much what it is, Morris said.

The ingredients, the main one is corn, are mixed in a mash tun, a large stainless-steel tank. After the “mashing” is done, the “mash” is put into 275-gallon containers and allowed to ferment for a week so alcohol can be produced.

Then, the liquid is transferred into a holding tank and allowed to settle before being pumped into the still.

Morris said they start the still at 170 degrees Fahrenheit and go up to around 212 degrees — the temperature at which water starts to boil.

In four to six hours they can make 30 to 35 gallons of product, Morris said. The product is stored in kegs until it’s bottled or put into a barrel to age. Perry Morris, distiller for Southern Grace Distilleries, stands in the barrel room at the distillery. Whiskey is aged in the barrels.

Like the microbrewery trend, it’s about people wanting to know where and how their alcohol is made, Thacker said.

As the products have gotten better, and the marketing has expanded, people have started to pay attention, he said, adding “I’m glad that there are a lot of these different products out there.” Thomas Thacker stands in what will be the gift shop for Southern Grace Distilleries in downtown Concord.

Southern Grace was chosen as the company name to reflect the region’s history and show the care and effort that  goes into making their moonshine, Thacker and Powell said.

“We are proudly Southern,” Thacker said.

He said they plan to have a gift shop in the downtown office at 20 Cabarrus Ave. E. where sampling sessions will be held.

The city of Concord has been very supportive, Thacker said. Mayor Scott Padgett was at Southern Grace’s opening ceremony.

When talking about the moonshine tradition, Thacker said its not about illegally producing liquor.

“The real tradition is somebody taking one thing and making something else out of it,” he said, “It’s the creativity and commitment.”