A gift for Christmas: Couple have built tradition of playing Santa and Mrs. Claus 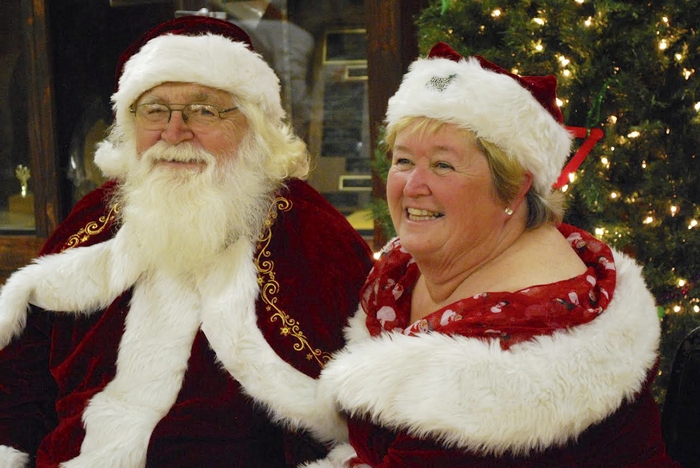 ELIZABETH ROY/FOR THE SALISBURY POST For the past 25 years, Walt Kincaid has dressed as Santa, and his wife, Kim Kincaid, has been his holiday helper. Ð She started first as an elf in a plaid docent's costume, and for the past 12 years has acted the part of Mrs. Claus. 'I love working with kids,' said Walt. 'And the adults have just as much fun with it.'

The very best gifts are those that you give, and nobody knows this better than Walt and Kim Kincaid — or should we say, Mr. and Mrs. Claus.

For the past 25 years, Walt has dressed as Santa, and his wife, Kim, has been his holiday helper. She started first as an elf in a plaid docent’s costume, and for the past 12 years has acted the part of Mrs. Claus. It’s all voluntary, and the jovial couple rarely turns down a request.

“We start around the first weekend in December,” said Kim Kincaid. “We’ve already had between 15 and 20 events so far.”

As to what brought this all about, you might say it was a dash of Christmas magic. When the Kincaids’ 30-year-old son, Johnny, was 5 years old, his kindergarten teacher asked Walt to play Santa at the children’s Christmas party.

“My mother threw a costume together for Walt, and when we went to the school, the funniest thing happened,” said Kim.

Walt had accidentally forgotten his black Santa boots, and had to go on stage in some old favorites: his blue and grey cowboy boots. Kim recalls that one of the little boys shouted from the crowd, “That’s not Santa Claus. It’s Johnny’s Daddy! Just look at the boots!”

That experience taught Walt to inspect his costume from head to foot before standing before the discerning eyes of children.

It was also the day that he found his Christmas calling.

Several Santa and Mrs. Claus suits and countless dream-come-true-smiles later, Walt and Kim couldn’t imagine spending their December any differently. They do it for the children, and as an expression of gratitude for every day they’re given on this earth, Kim says.

“It’s these kids,” said Walt. “I love working with kids, and the adults have just as much fun with it.”

Walt and Kim’s daughter, Erin Kincaid, often accompanies her parents on their holiday adventures and serves as photographer. She has taken over 100 photos so far this year, and shares many of them via email and mailed Christmas cards with the pictured children and their families.

“I see how happy it makes my parents doing this,” said Erin.

The Kincaids run the gamut with the events at which they perform. Homes for the elderly, restaurants, the Humane Society, the Girl Scouts of America, Veterans Affairs events, and churches are all on Santa and Mrs. Claus’s list of stops to date.

Tuesday’s event was one of their all-time favorites.

Since 1987, the American Legion Post 342 in Salisbury has hosted an annual Christmas party for disabled elementary students in area schools. This year drew 61 children with a range of physical and mental challenges.

After a marionette show, balloons, and a hot dog lunch, the children were wowed as Santa and Mrs. Claus entered the hall. One by one, the children were called up to Santa’s lap, where they were given an individualized gift purchased and wrapped by American Legion volunteers. Whatever each child had been dreaming Santa would bring this year was there under the tree, just for them.

“If you look in their eyes as they go get their gift, you’d think it was a million dollars they were getting,” said Wayne Kennerly, commander of Post 342.

Julie Smith, ladies auxiliary president for Post 342, looked on as the children took turns hugging the Kincaids and accepting their presents.

“It makes the party. Walt and Kim really do bring joy,” she said.

Even in the off-season, Walt fuels children’s Christmas imaginations. His beard and silky white hair are natural, and so it is not uncommon for kids to follow him with their eyes – or even follow him around a store from time to time – when he is not in costume.

Walt, 72, has had his share of reminders of just how special every day is. He is a cancer survivor, a double bypass heart patient, is blind in one eye and cannot hear well. But his family support – that of his wife, six children, 10 grandsons, and three great-grandchildren – and his positive outlook keep him going strong, with an open heart.

And the Kincaids plan to continue sharing this gratitude and joy for as long as they possibly can.

“We do it for the love of children and to make somebody happy, give them a smile,” said Kim. “And we have a ball.”