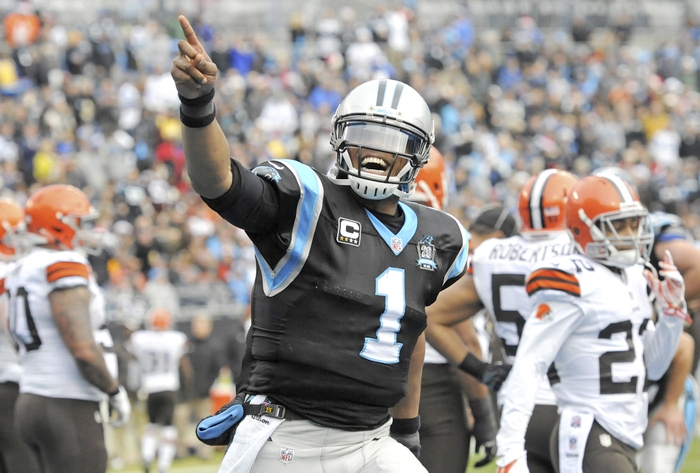 The Associated Press Carolina Panthers' Cam Newton (1) celebrates after running for a touchdown against the Cleveland Browns in the first half of an NFL football game in Charlotte, N.C., Sunday, Dec. 21, 2014. (AP Photo/Mike McCarn)

But their respect for the fourth-year quarterback has now reached an entirely different level.

Newton threw for one touchdown and ran for another, and the Panthers defeated the Cleveland Browns 17-13 to take sole possession of first place in the NFC South. The win comes just 12 days after Newton suffered two fractures in his lower back after he was hit by another car and flipped his truck in an accident that left him hospitalized with two fractures in his lower back.

“The guy’s a warrior,” left tackle Byron Bell said. “He could have made any excuse not to play. He has a bad back, a bad ankle.”

Fullback Mike Tolbert said he wouldn’t have expected anything less from Newton, especially after the two-time Pro Bowl quarterback battled through offseason ankle surgery and fractured ribs during the season.

“He’s putting it on the line for us, nobody else,” Tolbert said. “You can only respect that.”

Newton will have to put in on the line at least one more time next week for Carolina —and the stakes are even bigger.

Carolina’s victory sets up a winner-take-all showdown next Sunday at Atlanta between the Panthers (6-8-1) and Falcons (6-9) for the division title. It also guarantees a team without even a .500 record will win the NFC South.

The winner will join the 2010 Seattle Seahawks as the only teams to reach the postseason in a non-strike-shortened season with a losing record.

“Now it all comes down to one game and that’s all we can ask for is to be in that situation,” Panthers coach Ron Rivera said.

Newton threw for 201 yards and ran for 63 just 12 days after the quarterback suffered two fractures in his lower back following an automobile accident. Jonathan Stewart ran for 122 yards and caught a 9-yard touchdown pass from Newton.

“The effort was tremendous,” coach Ron Rivera said of Newton. “It kind of speaks to who he is and his toughness.”

Newton called the last 12 days “tiring,” but said the whole ordeal has left him with an entirely different perspective on life.

“For me to come out of an accident like that, all praises go to God,” Newton said. “He is using me in a positive way and I’m using my influence in a positive way. I’m on a (pedestal), so when I do good things or bad things people are going to be affected. So I just want to use mine in a positive light to encourage the next person. That is what we are on this earth for — to make people better.”

The Panthers have now won three straight after going more than two months without a victory. The Browns (7-8) were eliminated from contention when San Diego beat San Francisco on Saturday.

Johnny Manziel made his second NFL start for Cleveland, but left late in the first half with a hamstring injury when he was tackled near the Cleveland sideline by linebacker Luke Kuechly and safety Colin Jones on a rollout. Manziel said the hamstring started to tighten up on him on the previous drive.

Manziel did not return.

Some fans cheered as Manziel left the field, something Newton called “classless” in his press conference.

“Anytime when a person gets hurt you don’t celebrate,” Newton said. “I have had that done in my career and it just takes the integrity out of the game. For the crowd to respond in that sort of way — we’re better than that.”

“It’s frustrating,” Manziel said. “I’ve never done anything like this whether it’s been playing since I was a kid in any sport, football, baseball, basketball. Never had anything like this so it was really new to me and really frustrating because I think I’ve put in two really good weeks of practice.”

The Panthers led most of the game before Browns tight end Jordan Cameron got behind the Carolina secondary and hauled in an 81-yard touchdown pass from Brian Hoyer, who replaced Manziel. That gave Cleveland its first lead of the game at 13-10 with about 10 minutes remaining.

The Browns had just 126 yards on offense before that play and just 228 yards all afternoon.

But Newton, looking healthy and mobile in escaping from the pocket, drove the Panthers back downfield. He completed a 9-yard pass to Stewart, who slipped out of the backfield and found an open pocket in the end zone.

Carolina’s defense made a late stand with Kawann Short coming up with a big sack on Hoyer, and Thomas Davis making an open field tackle to force a punt with less than four minutes remaining.

Carolina then sealed the win when Stewart broke off a 30-yard run on third-and-6.

Hoyer was 7 of 13 for 134 yards with one touchdown and one interception.

“Offensively, not near good enough to win in this league,” Browns coach Mike Pettine said. “We made the one big play but other than that, we never really seemed to get in much of a rhythm.”

NOTES: Panthers cornerback Josh Norman had an interception for Carolina, but then fumbled on the return when he held the ball with one hand and was hit from behind. … The Browns managed just eight first downs.