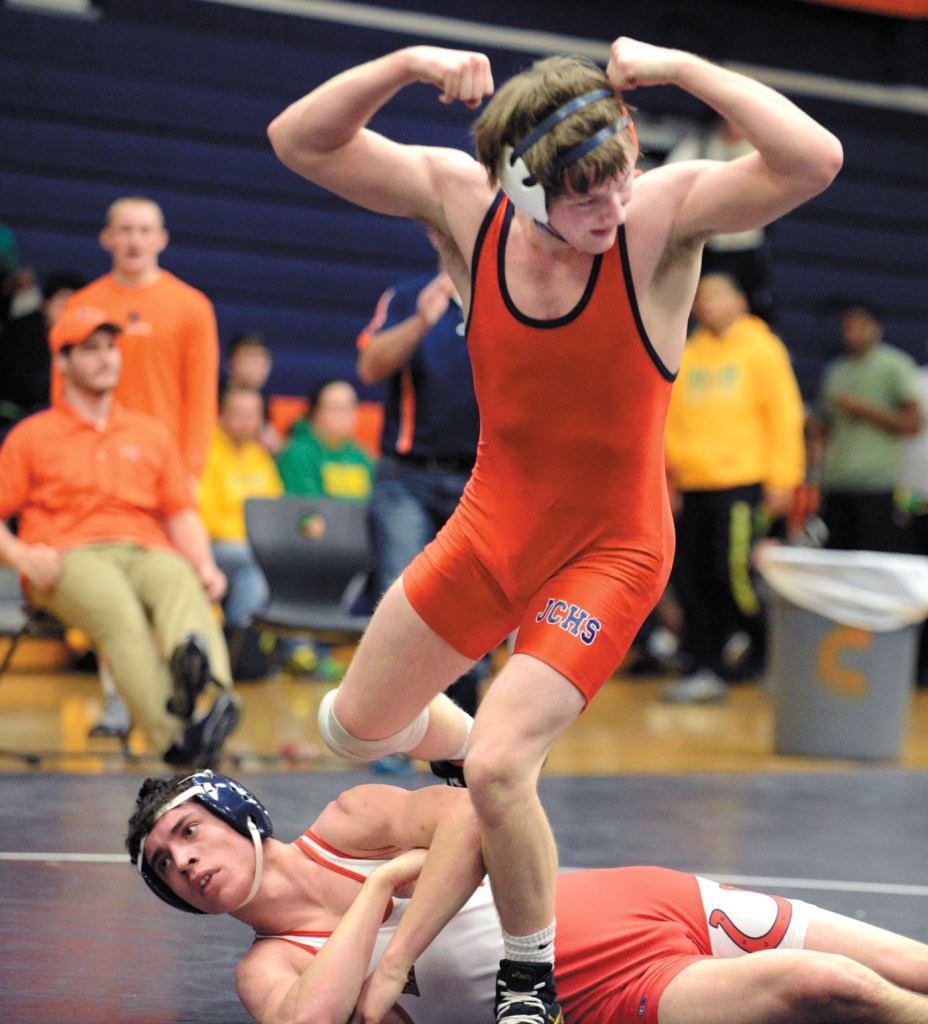 No, East Rowan did not successfully defend its championship in the Rowan County Championship on Saturday at Carson. The Cougars etched their name into the record book with their first title, but the trophy — awarded for the first time and financed by Carson athletic director Mark Woody — will reside in their display case for the next year.

“We just started giving the trophy this year,” coach Bryce Vandenberg said. “And if we were going to spend the money on it, we definitely didn’t want it to leave the building.”

Carson’s 202 points were 20 more than runner-up East Rowan and 58 more than third-place Salisbury.

Carson used an extraordinary championship-round performance to ensure the trophy remained in China Grove. Trailing East Rowan by 14.5 points entering the championship matches, the Cougars went 7-1 with three pins and a tech fall to sweep past the Mustangs.

“It’s a feeling you can’t really express, but it feels great at the same time,” four-time county champ Alex Lyles said after winning the 285-pound weight class. “We knew we had to go out and get our business done. It’s such a hard goal to accomplish.”

It was well-deserved. Carson won matches it was supposed to win and a few it wasn’t. Most notably was junior Jaron McMasters’ 9-3 decision over EastRowan’s Max Wall in the 160-pound final.

“Well, I knew he was was a state qualifier last year,” said McMasters, who improved to 21-2 on the season. “And he’s ranked ahead of me. In my head I knew it would be a big win. I just had to go get it.”

Brandon Sloop (170) pushed Carson ahead in the team standings one match later when he picked up a 19-4 tech fall over East Rowan’s Daniel Muncy. Now 12-0 and a two-time champion, Sloop was met with little resistance.

“It wasn’t just me,” he said. “We put a lot of work into this. If everybody just wrestled to their potential, we knew we could win this.”

It was a discouraging finish for the Mustangs , who prevailed in just three of nine final-round matches. Sam Cornacchione (106) improved to 11-1 and won his second county ribbon. Jeffrey Burrell (126) earned his first, and unbeaten Shiheem Saunders cleared the room at 182 and was named the tournament’s outstanding wrestler.

Six other Mustangs — including previously unbeaten Logan Haas (120) — were beaten with titles on the line.

“Going into the finals, I thought we were going to win,” said Saunders (11-0), who notched a 15-8 decision in the finals over Salisbury’s J.C. Burton. “But sometimes players don’t execute like they should. We’ve got to learn from this and get better.”

“We were all hungry for this,” said Argabright, who handed 19-match winner Zach Ridenhour of West Rowan a 17-6 major-decision setback. “We just got ourselves in the right mindset. We’re going home with the win and that’s really not a surprise.”

It was a little surprising to Vandenberg, who viewed East Rowan’s storied history as a major obstacle.

“We had our work cut out for us,” he said. “But this is something we’ve been working toward for four years. Today was an important milestone for our program. This is where tradition begins. We started to take the next step.”

Salisbury claimed two county champions in Mark Gonzalez (120) and Simeon Caldwell (195). Gonzalez, a three-time winner, hung on for a 7-6 final-round nod over Haas, who erased nearly all of a 7-1 deficit in the last 23 seconds. “It was stamina. That’s what got me through,” said Gonzalez, who was nearly pinned as time expired. All I knew was I had to keep moving. That’s how I avoided the pin.”

North Rowan (88), West Rowan (82) and South Rowan (69) rounded out the team standings. North Rowan’s Jaleel Hitchens (145) — who has drawn interest from at least two Division I college football programs — won his third county title by beating Carson’s Bailey Rayfield 7-4 in the finals. South Rowan’s Logan Durham (113) — a defending state champion — recorded two falls, improved to 10-0 and won his third straight county championship. “It was a half (Nelson),” he said after pinning East’s Landon Carico in 1:50  in the final. “I rode his wrist up under and he popped one arm out. That enabled me to get the half.”