Shrine Bowl: Wyrick and Chambers get the big picture 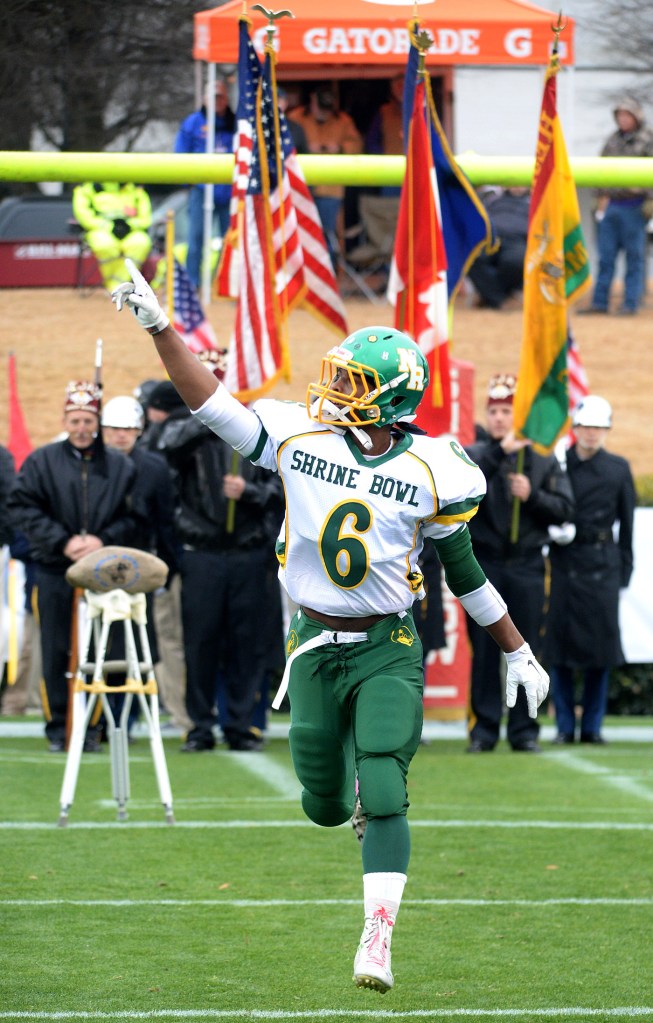 SPARTANBURG, S.C —  North Rowan’s JaReke Chambers and East Rowan’s Seth Wyrick didn’t get the touches or the chances to impact the Shrine Bowl how they wanted.

But both of them still got it.

The Shrine Bowl is more than a football game. This was the 78th installment. Like the previous 77, it was played with the purpose of benefiting the Shriners hospitals for children.

That first Shrine Bowl in 1937 was the nation’s first high school all-star game and raised $2,500. The Shriners’ check on Saturday was for $1.5 million.

That’s hard to imagine, but with the North Carolina offense employing only one running back and four wideouts, Chambers was used exclusively as a receiver and returner. Chambers was targeted for only one pass, and it was batted down. He also was settling under a kickoff and a punt, eager to return both, only to have teammate Nate Mullen nudge Chambers out of the way and return the ball.

So Chambers was on the field quite a bit on a cold, dreary day, but he never had the ball under his arm.

“It was frustrating as far as how the game went, because I wanted to show out and wanted to make some things happen for my team,” Chambers said.

Wyrick played a lot, but also was only targeted once. Officially, that one was a drop.

“It was a little high, but I should’ve caught it,” Wyrick said. “The timing was just off some.”

For the first time since his sophomore season, Wyrick wasn’t the primary target for his team.  He was wide open in the end zone on a two-point conversion try that would’ve tied the game at 14-all, but QB Josh Ladowski  threw unsuccessfully to another receiver.

“I thought for an instant he had his eye on me and was coming to me,” Wyrick said. “But then he turned his head.”

Wyrick’s brother, Samuel, East Rowan’s record-setting quarterback, was honored on Thursday and Friday by Charlotte television highlight shows. The “Friday Night Frenzy” Player of the Year, Samuel watched his brother play without him Saturday for the first time.

The whole game felt weird. The most critical play was a North Carolina field-goal attempt in the second quarter that was blocked by the Sandlappers and returned for a 74-yard touchdown by linebacker Jordan Williams. That block was a 10-point swing, and South Carolina won by nine.

One of the wilder plays came on a kickoff return. Wyrick fielded it, knew Chambers was the deep man behind him, and turned to hand the ball to Chambers. They missed connections. In the scorebook, Wyrick was charged with a fumble for minus-9 yards.

“It was a play we’d worked on in practice,” Wyrick said. “We were supposed to make a handoff and take off in different directions and they wouldn’t know who had the ball. But I turned around, JaReke was running by, and the ball hit the ground. We were lucky to get it back. It’s just hard to get all the timing down for plays like that in a week.”

The bottom line was still the kids in the Shriners Hospital. Long after Wyrick and Chambers have forgotten the quietest statistical day of their lives and the two-a-day practices, they’ll remember they were part of something bigger than themselves.  They ate a lot of cheeseburgers, shook a lot of hands, played with and against future Division I athletes and helped a lot of kids.

“It was a huge week for me and a great experience,” Chambers said. “I made a lot of friends. I was busy every single day.”

The Shriners have raised over $75 million dollars with their annual all-star game.

“This really is a big game,” North Rowan coach Joe Nixon said. “We had 44 of the best in our state here today, and  JaReke was one of them. I’m proud of him. He’ll look back one day on the Shrine Bowl as one of the greatest experiences of his life.”
•
NOTES: Chambers and Wyrick are uncommitted. …Concord star Rocky Reid had six carries for 13 yards. …Concord’s Nick Leverett, a 315-pound offensive lineman who played for North Rowan before he became a Spider, picked up a fumble and rumbled 4 yards. …MVP honors went to South Carolina’s Matthew Colburn (Dutch Fork, offense) and Hassan Belton (Blythewood, defense). N.C. MVP were Ladowski  and Brandon McMillian (Scotland). …S.C. managed just five first downs and 38 rushing yards and turned the ball over five times — but still won. …S.C. has won three straight and leads the series 44-30-4. PHOTO BY PJ WARD-BROWN/FOR THE SALISBURY POST
East Rowan’s Seth Wyrick touches the rock during player introductions at the 78th Annual Shrine Bowl of the Carolinas on Saturday at Wofford College’s Gibbs Stadium in Spartanburg, S.C.