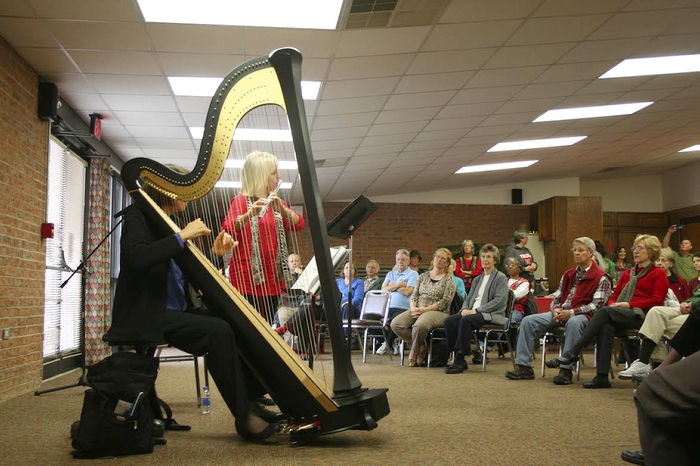 The sounds of the season came to Rufty-Holmes Senior Center Thursday afternoon, with harpist Helen Rifas and flutist Gay Tatman performing as part of the Winter Arts Christmas Concert.

More than 80 people attended the 30-minute concert, which was followed by a reception and display of artwork by students in the center’s four art classes. Instructors include Frances Driscoll, Leslie Frontz, Frank Saunders and Robert Toth. Many pieces of the artwork are for sale, and the pieces will rotate as new students come into the classes, said Carolyn Blackman, herself an artist, who helped organize the art for the event.

“They’re all very qualified and all very versatile,” Blackman said of the instructors.

But the music also garnered its share of the spotlight on Thursday, with an audience eager to hear the combination of harp and flute in such an intimate venue.

Rifas and Tatman, who both live in Statesville, didn’t disappoint. Their varied repertoire included numerous Christmas pieces, among them “Angels We Have Heard on High,” “Still, Still, Still,” “Oh Come, Oh Come, Emmanuel,” and “Silent Night.” The duo also played an unusual arrangement of “Pat-a-Pan,” in which Rifas tapped the harp like a drum, and which also featured lots of runs and trills by Tatman.

The duo included three short pieces about the Festival of Light, as Thursday was the second day of Hanukkah.

The women also played several pieces inspired by the winter season, including “Largo” from “Winter” by Vivaldi, and two traditional Celtic pieces, “The Month of January,” and “When the Snow and Frost Are All Over.” The “Fantasia on Greensleeves” by Ralph Vaughan Williams, was especially mesmerizing.

Levi Redden, 2, sat on his mother Vicki’s lap for the concert, mesmerized by the music. Also attending were his older sisters Kate, 6, and Elaina, 9, who is a student of Rifas.

“Ever since she’s known what a harp is,” Elaina’s mom said, “she’s wanted to know how to play.”

Rifas has played for many decades, she said. She started out playing piano, but switched to harp at age 12 at the behest of her after-school orchestra teacher. Her teacher even helped her find a harp and harp instructor, she said.

“I liked their arrangements,” said Susan Trivette, organist at First United Church of Christ and flutist with the Salisbury Symphony Orchestra. “They did some things I had never thought of before.”

Trivette agreed that such performances are good for fellow musicians to come and get ideas. But more importantly, she said, “It’s good to come and sit and listen.”

Art classes at Rufty-Holmes Senior Center will continue in January. For more information about these classes, call the center at 704-216-7714.