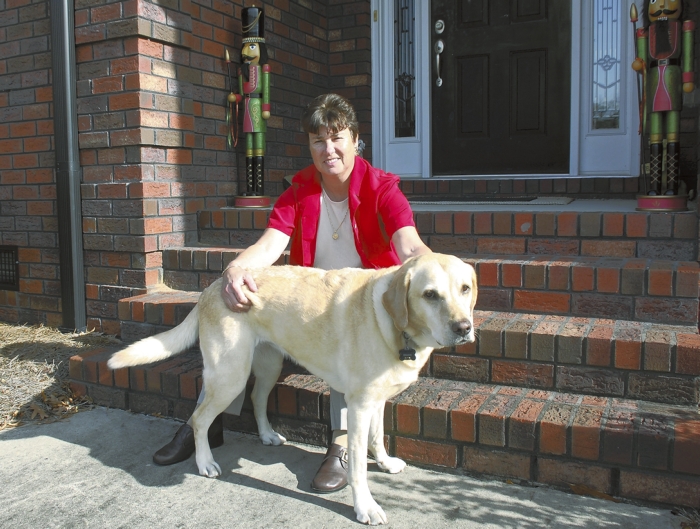 Mark Wineka/Salisbury Post Retired Maj. Patricia Poole of the State Highway Patrol sits on steps of her front porch with her dog, Gracie.

CONCORD — Three decades  ago, when approaching the driver’s side of vehicles she pulled over, Trooper Patricia Poole heard plenty of yes-sirs and no-sirs before motorists realized the person behind the sunglasses was a woman.

Poole, a Rowan County native and 1982 graduate of East Rowan High, recorded plenty of N.C. Highway Patrol firsts in her 30-year career — first female trooper in Alamance County and, in overall field operations, she led the way for women officers as a sergeant, first sergeant, lieutenant, captain and major.

“There were a lot off firsts,” Poole says, “but I never asked to be first.”

It’s somewhat fitting Poole raised the bar for women troopers, because she’s a former high jumper who after 33 years still holds the Rowan County high school record at 5 feet, 7 inches. The longstanding mark is even more impressive when you realize Poole is only 5 feet, 5 inches tall.

By the time Poole retired Dec. 1, she had served as a trooper and officer in Burlington, Lexington, Raleigh, Salisbury and Monroe, besides holding down important positions in the Highway Patrol’s headquarters.

In various assignments in Raleigh, she was a first sergeant in benefits, a lieutenant in accreditation, a captain in internal affairs, a major in administration and a major in field operations, responsible in overseeing troop captains in half the state.

In addition, any special assignment she was asked to do, she did it gladly, including stints as a recruiter for the patrol and as a basic school instructor in Garner. Again, she was the first woman.

When Poole went through basic school herself over 20 weeks in 1986-87, she was the only woman among the 41 graduates in her class. The basic training had started with 79 cadets. “It’s really like being in boot camp,” she recalls.

The physical exercise part of the training wasn’t difficult for Poole, who was an athlete in high school and college. She figured the toughest test would come in boxing, when she had to last two rounds with two different male opponents.

She ended up with a black eye and was knocked to the ground during her bouts, but she bounced back up and kept fighting. It was an exercise trying to teach the cadets how to fight for their lives.

The Highway Patrol’s policy then was to prohibit a new trooper from returning to his or her home county for at least the first 10 years. The patrol assigned Poole to Alamance County, but acceptance from her peers didn’t come easily.

“They didn’t really know how to deal with a female trooper,” Poole says.

Rookie troopers are assigned a training officer for six weeks, and the troop captain made sure Faye Davis, the wife of Poole’s trainer, Frank Davis, was going to be okay with her husband being in the same car eight hours a day with the young Poole.

Faye Davis gave her OK. In fact, Davis and Poole often stopped by his house for meals prepared by Faye. The couple became dear friends to Poole.

The new trooper soon had her own car and was working wrecks and stopping speeders, drunken drivers and drug dealers. She says she helped a lot of people , too — folks who ran out of gas or whose cars had mechanical breakdowns. She sometimes reached into her own pocket and paid for gas, hotel rooms or meals.

Poole says there are times when compassion is warranted. Overall, she adds, how you treat motorists is the impression they take with them of the whole agency and, if they are from out-of-state, maybe of North Carolina in general.

‘You’re not a robot out there,” Poole says.

Poole’s starting salary as a trooper in 1987 was $18,192 a year. She found male motorists she stopped would generally give her the same respect they gave male troopers. Women drivers sometimes expected a female trooper to give them a break.

As for her trooper colleagues, Poole thinks she earned their respect when she proved she could handle herself when physically challenged by a motorist.

Early in Poole’s career, a guy she had corralled for fleeing a wreck scene made a grab for her gun, and Poole answered by hitting him across the forehead with her flashlight, leaving him with a wound requiring 48 stitches.

“He let me go after I hit him,” she says. A small newspaper in Alamance County, the Graham News, reported how she had gotten the upper hand over her assailant, and nobody messed with her much after that.

Poole stayed 10 years in Alamance, making many lifetime friends and feeling a part of the community. It’s why she decided to hold her retirement dinner in Burlington Dec. 4.

In 1996, she moved from Burlington to Lexington when she was promoted to sergeant — the patrol’s first woman sergeant in the field. She says it proved to be another great experience for her because, for the first time, she was supervising other troopers, many of whom were older and more experienced.

She told the veterans in Troop E she would give them the respect they deserved, asking only that they give her the opportunity to be a good supervisor. “I think it was a very good relationship,” Poole says.

Within two years, Poole’s ever-evolving career of new positions and promotions was well under way when she was assigned to Troop 3 in Raleigh. By 1999, she received a promotion to first sergeant and was taking night classes at Wesleyan College to complete her four-year degree in criminal justice.

She transferred voluntarily back to the troop in Burlington when her father suffered a stroke. She was the first woman first sergeant there. She later returned to Raleigh as a lieutenant in accreditation and hated it.

She soon was back in field operations with the troop stationed out of Monroe. Then it was back to Raleigh as a captain in the administrative services section, then internal affairs. She came back to the Salisbury troop in 2009 as a captain, and when she received her promotion to major, she had to return to Raleigh headquarters to oversee hiring, promotions and recruiting.

Poole transferred with her major’s rank to field operations in 2012 — one of only two majors in the position.

Poole says she has only one regret in her career — her near fatal wreck in 1989.

“I thought I was going to make that curve,” she says.

Traveling about 80 mph on N.C. 119 in her LTD, Poole was trying to race ahead and intercept a drunken driver on the interstate in Alamance County. She says her youthful confidence led her to make a poor decision. She failed to negotiate a curve, and her car left the road on the right side and struck a pole.

Poole’s vehicle was crushed like an accordion, and she had to be air-lifted to Duke University Medical Center. She was in a coma for three days and would be in and out of the hospital over 59 days.

The wreck broke her pelvis, jaw, a shoulder and ribs, and she punctured a lung. Her mouth was wired shut for two months.

“I never thought I was hurt as bad as I was hurt,” she says.

Poole already knew from her sports career as a youngster and her training as a trooper how to bounce back.

Patricia was the youngest of four children of Raymond “Freck” Poole and Nona Poole. Freck Poole had a long minor-league baseball career and made it briefly to the majors. After baseball, he worked for Isenhour Brick.

When she wasn’t looking after the family, Nona worked as a weaver in Cannon Mills Plant No. 7 in Salisbury.

Freck passed some good athletic genes to all of his children, especially Patricia, who was crushed when she wasn’t allowed to play Little League baseball with the boys. She turned instead to Ed Dupree’s track club for youngsters, the Faith Flyers.

“I ran, and I never looked back,” Poole says.

Dupree became like an extra parent for Poole, especially after her mother died. Nona had been the rock holding everything together. To Patricia, it seemed as though there wasn’t anything she couldn’t do, even down to hunting and killing hogs .

With other elementary school and middle school Faith Flyers, Poole often piled into Dupree’s station wagon as they went on trips to various relays and Junior Olympic meets. She laughs now, thinking back to how many times Dupree would have been cited today for not having all those kids in seat belts.

Poole first started high jumping in middle school and fell in love with it. She set the county record for the high jump in both 1981 and 1982. She also was an all-county basketball player for East Rowan High. As a runner, she usually competed in the one- and two-mile events, besides cross country in the fall. She was a decent softball player, too, and dabbled in field hockey.

When she was a high school sophomore, Coach Jim Swann drove her and Alvin Charleston to the National Juniors competition in Witchita, Kan. She finished ninth.

Poole became so dedicated to high jumping that she often asked the guys on the track team to load up all the pole valuting/high jump equipment on a truck so she could set it up and practice in her backyard. She finished second twice at state meets.

Her dedication led to scholarship money from Appalachian State, where she broke the school high-jump record three different times and cleared the bar at 5-8  as a sophomore. She also competed in the 400-meter hurdles and triple jump.

Because her father was alone and the money had run out, Poole left Appalachian State after two years and returned home. About that time, Cecil Whitley had both men’s and women’s softball teams which traveled together to tournaments.

Several of the male players were highway patrolmen, who persuaded Poole to apply for basic school. She enrolled as a cadet in October 1986. “I saw a great opportunity,'”she says.

Today, the 52-year-old Poole is still running, often logging a couple miles per outing with her 9-year-old lab, Gracie.

She built a handsome home on the edge of Concord in 2005, and she also has a place at Emerald Isle, where she enjoys fishing.

Poole’s other passion is cooking and entertaining. She says she never married because she was married to the highway patrol for the past 28.5 years.

She is thrilled thinking about starting a new career — whatever it is — but she doesn’t want to rush into a decision. “I’m not going to quit working,” she promises, but she also sees herself making room to be a community volunteer, maybe even a coach.

As for the highway patrol, Poole will always be a trooper.

“I’ve got to thank the citizens of North Carolina for allowing me to serve,” she says.