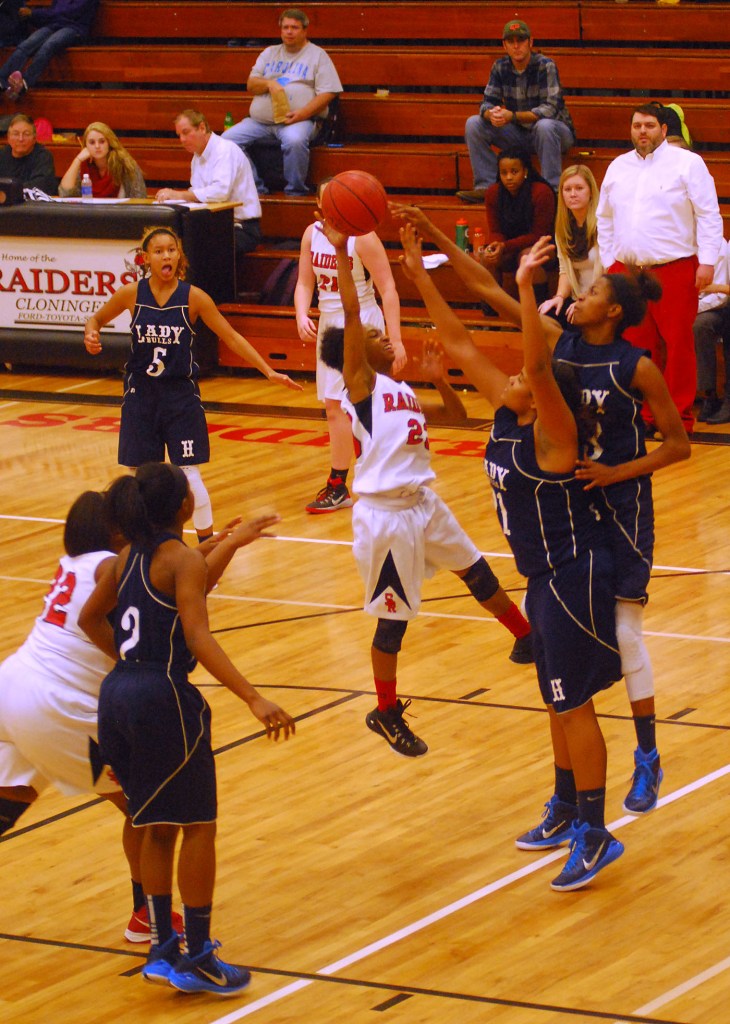 Adam Hosuton/The Salisbury Post The shot of South Rowan's Sylvetta Bost is disrupted by a pair of Hickory Ridge defenders on Friday in a South Piedmont Conference showdown in Landis. The Ragin' Bulls defeated the Raiders 54-51.

LANDIS — First place will have to wait for South Rowan’s girls basketball team.

With a chance to extend their gait in the South Piedmont race, the Raiders instead were dislodged from the league’s top perch Friday. South Rowan fell 54-51 against visiting Hickory Ridge

“It was there for us to take,” coach Jarrod Smith said. “Bottom line is we lost it in two places. We gave up too many offensive rebounds and we didn’t make free throws. We’re not a 48-percent free throw shooting team.”

South Rowan (6-3, 6-1) is the second-place team after converting only 14 of 29 from the foul line and suffering its first conference loss. Hickory Ridge (9-1, 6-0) took a defense-first approach, allowed only one South Rowan field goal in the last five minutes of the game and ascended into first.

“We had to work for this one,” said winning coach Tolonda Simmons. “It was a good way to measure our progress, beating a conference team on the road with first place on the line.”

“It was a tough game,” said Locklear. “We’re upset about it. I want to win more than anybody. But we’re not even halfway through the season and hopefully we’ll get them next time.”

South Rowan had its chances Friday. It trailed by six on two occasions, the second when Hickory Ridge’s Gabby Smith hit a layup that made it 34-28 with 1:55 remaining in the third quarter. Williams gave the Raiders their first lead since the opening moments when she threaded a 3-pointer from the left corner with 28 seconds left in the period.

“Malaysia surprises you with how athletic she is,” Smith said. “She can really move her feet and she is aggressive on the boards. If a rebound comes her way, she’s getting it. And she can shoot — she makes 3-pointers all day in practice. It’s not a surprise that she made them.”

Williams drained her second long ball early the fourth quarter, and Locklear’s bomb from right side helped South Rowan regain the lead 45-43 with 5:24 to play. Hickory Ridge’s Smith (20 points, 13 rebounds) — a 5-foot-10 power forward — scored nine points in the final period, including a putback layup that closed the scoring with 22 seconds on the clock.

“That’s a freshman,” Simmons gushed. “She’s already had three or four double-doubles. We’re really a new team, a young team. We’re asking ourselves, ‘Why not us?’ If we play hard and leave it on the floor, everything else will take care of itself.”

Chipman opened the game with a 3-pointer from the top of the key and pumped in another from the right side for South Rowan’s final basket. But she misfired twice from long range in the last 12 seconds, compounding a long night that saw her convert just 5-of-14 free throws.

“Anybody would be a little disappointed with that,” she said. “It’s such a mental game from the free-throw line.”

“The last thing I’m worried about is whether Cassidy Chipman will get back up,” he said. “She will.”