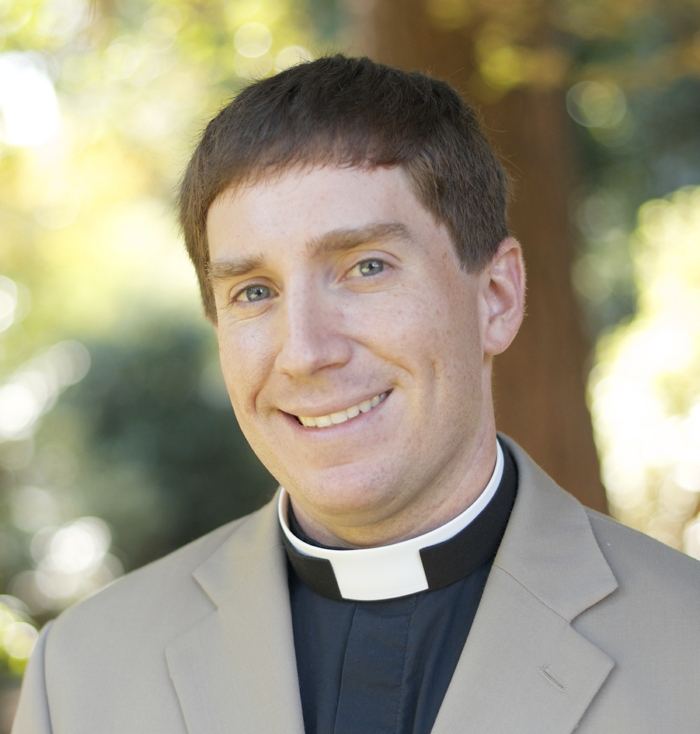 St. Luke’s Episcopal Church is celebrating the season of Advent not only with the traditional observance of the coming of Christ into the world, but also with the arrival of its new rector, the Rev. Robert Black, the 28th in the parish’s 261 year history. He succeeds  the Rev. Whayne Hougland, who was elected Bishop of the Diocese of Western Michigan last May.

The south Florida native, with most of his relatives now living in Piedmont North Carolina, has been the leader of the parish since Sept. 8 and held his first services on Sep. 14. He is married to Tyler, a professional speech therapist, and they are parents of two-year old Ellie.

A graduate of Wake Forest University, he earned his master of divinity from Virginia Theological Seminary.

In a letter to the St. Luke’s parish, Father Robert said that he could not tell the members of his new parish “how excited I am to have been called to be your next rector.” He had been working on the process of seeking a new church position for a year and in the process was learning “a lot about myself and the wider church. There were difficult times in my search process, abut my prayer throughout was ‘Thy will be done’ and I trusted that God was leading me to the place where I was called.

“After I first did a video interview with St. Luke’s Search Committee, I felt a sense that the right call was beginning to take shape. When we visited Salisbury a few weeks later, that sense of call was only strengthened. It was with great joy and thanksgiving that I accepted the call to St. Luke’s.”

Father Black’s journey to the priesthood began when he was a young boy serving as an acolyte in his Florida church. He enjoyed being an acolyte, carrying the torches, the cross, and serving at the altar, assisting the priest. He looked forward to the services and made sure he was in attendance as preparations were underway for the weekend services. He wanted to make sure he was available in case some other acolyte did not show for his or her turn. His faithfulness did not go unnoticed and the Rector took him under his wing and nourished his growing interest and experience in worship activities.

When asked by parishioners what he wanted to do when he grew up, he often answered that he wanted to be a professional acolyte. He later figured out that being a priest was getting close.

In college he was having a conversation with a friend about religion, faith, the church, etc. The phone rang. He tried to answer, but there was no one on the line, no caller ID. It only rang once. Robert felt that it was, in fact, a relatively clear sign that his life was about to change.

The next week, he talked with the Episcopal campus minister at Wake Forest and started his journey to ordination, which eventually was sponsored by the Wake ministry.

In the latter stages of his seminary training, he became an intern at St. John’s in Washington, which was known as a  good place if an intern’s interest was in getting experience in both English and Spanish. He interned there two years and upon graduation from seminary, he was retained for two more years then began his search for a permanent parish position.

His time at St. John’s was interesting and varied. The parish, true to its definition as The Presidents’ Church, was attended by Presidents George Bush and Barack Obama on varying occasions. Bush frequented the 7:45 a.m. service. A number of Cabinet officials were regulars, including the recent Secretary of Defense Church Hagel, as well as his wife, who served on the Vestry, the parish’s governing body. Also seen regularly at service were former head of the FBI Robert Mueller and David Sanger, Washington bureau chief of the New York Times. Cabinet officials led many of the adult education classes.

On occasion, Robert and St. John’s rector were also included on the invitation list to special events at the White House.

Now that he is the leader of his own parish, what does Robert see for St. Luke’s future. “We want St. Luke’s to work beyond its walls,” he declares. “Being a part of the community, not inwardly focused, but being a force for God in the greater community. Churches that are vibrant and growing are churches that look outward and are strong members of the community.”

Often using quotes from learned scholars in his sermons, Robert references a former Church of England Archbishop of Canterbury William Temple who said that “the church is the only organization that exists for the benefit of people who are not yet its members.”

“We want to keep in mind the people who are not here,” Robert observes.

“I liked the portion of my interview for St. Luke’s rector where the search committee talked about St. Luke’s mission as the church that feeds people. I want to build on that so that we can feed people through outreach, feeding their souls and being a part of the community and not just a historic building.”

He remembers during his time at St. John’s, especially in the spring and summer when the tour buses would stop in front of St. John’s eager to visit the so-called “Presidents’ Church” located across from the White House and in a historic neighborhood. People would often ask ”Do you actually have services here or is this just a museum?”

“And that was one of our talking points,” he remembers, ”St John’s is not a spiritual museum. We don’t want St. Luke’s to become museum church, tucked away in an historic neighborhood.”

To that end, Robert is out and about in the area. In fact, he writes his sermons on his laptop at a table in the Koco Java coffee shop a few short blocks from St. Luke’s. “I like to support the local businesses, he says, and I have few distractions there.”

“What I want is for St. Luke’s to be recognized as a church for all people. You don’t have to think a certain way, have a certain sense of piety, cross yourself a certain way. One of the comments that most impressed me about St. Luke’s was said during a Skype interview. A committee member said ‘We are going to do great things at St. Luke’s with or without a priest. We just want someone to help us.’ That was the most exciting thing that I had heard from any of the churches I had interviewed with during the whole search process.

“And that is what I have picked up here since we arrived. That St. Luke’s is ready to go, excited, on the move, ready to be a force in the community, and to go deeper into worship.”

And what do we call him, this new, young leader? He says “Father Robert” is OK, for others “Robert” is fine. “I know that my office and title are not just about me. What works for others is OK with me. First and foremost, I know that everyone is a child of God and that is what I want to be known as. When I am in the community and wearing my collar, most folks call me ‘Father’ and that is fine.

And at Koco Java? It’s usually “Father,” he says.

Lynna Clark: In the wrong lane